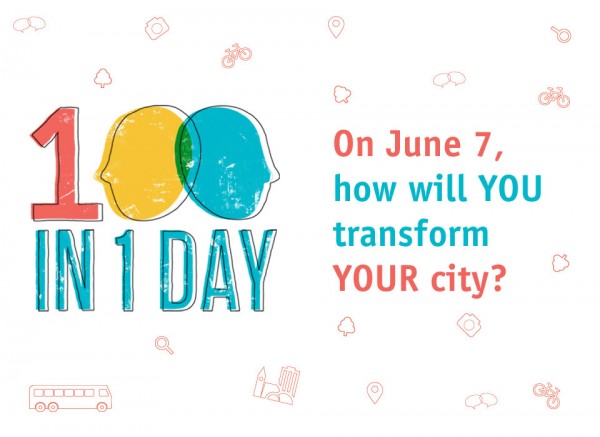 HALIFAX – Imagine if more residents could put on glasses and see streets through the eyes of someone who can change them. Problems might have trouble surviving if people felt they could simply fix—or have fixed—any issue they see. We would see more new, unexpected uses of space. With people feeling like their opinions matter, we could also rely on more residents feeling proud enough to want to stay here. Feeling capable is more than useful; it decides the relationship between residents and their city.

On June 7th, the 1001in1 Day Festival is an opportunity to pass those glasses around. The idea—which started in Bogota, Columbia, in 2012—is to make 100 interventions in one day to improve the city. Anyone can organize an intervention, and anyone can take part in them.

“Intervention” is defined broadly. On June 7th in Halifax, there will be a city-wide book-swap, a clothing-swap, a clothing-drive, a plant and antique sale, a hike, young people telling you why sexisms sucks, a workshop on naturalizing yards, bee-keeping lessons, hammocks for you to relax in, people sketching in the park, a new tool library to explore, small-house-sculptures, art-bike installations, and more.

If this city can muster 100 interventions, it will be a fine day to wander the town.

More than an opportunity to have fun, this festival is a way to expose residents to the notion that they can simply decide to do something that is a good idea. One intervention, “Daylighting Dinner,” invites residents of Bloomfield Street to bring their tables out onto the sidewalk and have dinner in public. No complex organizing or equipment will be necessary to make this intervention work, and yet it could, for one afternoon, totally change what it feels like to spend time there.

I wrote in a previous article that quality of life does not depend on how many people could be contributing to their community, but how many people are. This festival is one method for reaching that goal. There is a life-cycle in having an idea, getting people motivated, organizing it, and following through. The more residents see projects move through those stages, the easier it is to decide to make the next idea a reality. The one-day nature of the 100in1 Day Festival creates exposure to that life-cycle in many manageable doses.

The festival will, so to speak, help break the seal for community involvement. For every organizer and every participant, the festival is 100 ways to say “this is possible,” and we need a lot more people saying things are possible.

Seeing streets as malleable is true to the oldest strain of Nova Scotian culture. I was recently taught by Mi’kmaq linguist Bernie Francis that almost everything in Mi’kma’ki are verbs rather than nouns. As a result, a “street” would not sound so much like a permanent object, but a section of pavement and cement that is currently “being a street.” Mi’kma’ki speakers are, therefore, much less likely to assume things will remain the way they are.

If we all spoke Mi’kma’ki, we might all be better residents living in a better city. The 100in1 Day Festival is at least a step in the right direction.