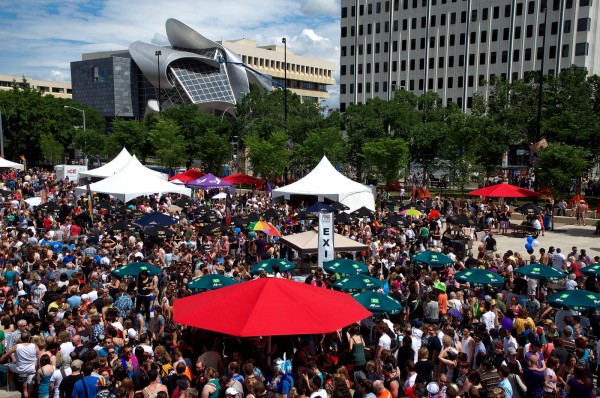 Editor’s note: Coinciding with the Edmonton Pride Week festivities starting this Friday, one of our new writers, Tyson, will be exploring topics about queer space and geography in Edmonton.

Being new to Edmonton from Vancouver, I am doing my best to involve myself in the community in order to make my transition here easier.  It is going quite well so far, I am finding Edmontonians to be some of the warmest and welcoming people around.  I am constantly meeting people who are quite proud of the city they live in, and they are more than willing to show me around.  Despite this, I did have some preoccupations about returning back to Alberta after living in B.C.

As a gay male, I will have to admit that I was worrisome about the stereotypical image that precedes the perception of Alberta: that of social conservatism.  I think it is naïve to dismiss the social conservative elements of Alberta, but I also believe it to be naïve to presume that others places in Canada are exempt from that experience. So with that in mind, I put hesitations aside and made my move.

Part of my hesitation lies in the fact that Edmonton lacks a defined geographical queer neighbourhood. In Vancouver, I took advantage of living in a city with a gay neighbourhood.  It was always easy to think that if at any time I wanted to be with a group of individuals whom shared a common experience of being gay, then I could just head down to Davie street.  That in mind I knew I had to take charge and seek out the gay community in Edmonton because the city lacks an official queer neighbourhood.

My first real exposure to the gay community in Edmonton was when I volunteered as a chaperone to the Queer Prom.  It was an event for LGBT youth under the age of 25 organized by Youth understanding Youth, and I have to admit that it was better than my own high school prom.  It inspired me that community organizers in this city recognize the need for a queer friendly space (especially one for queer youth), and took action in creating that space.  In doing so, I felt warmly embraced by the Edmonton queer community, and I felt better about my decision to move here.

There is a question that persists; is there a need for a defined geographical neighbourhood, or can a community thrive without that geography?  A geographical defined area makes it easier for members of that community to have a sense belonging.  That being said I was inspired by the thriving Edmonton gay community, which persists despite lacking much geography.  I am even more excited to interact with the gay community with the upcoming Edmonton Pride festivities.   I endeavour to define the Edmonton gay community in subsequent pieces, which will define the historical roots of Edmonton’s gay community, and the future of it.  In those pieces, I will attempt to answer the following:

Not an easy challenge, but an important dialogue to have as a city.