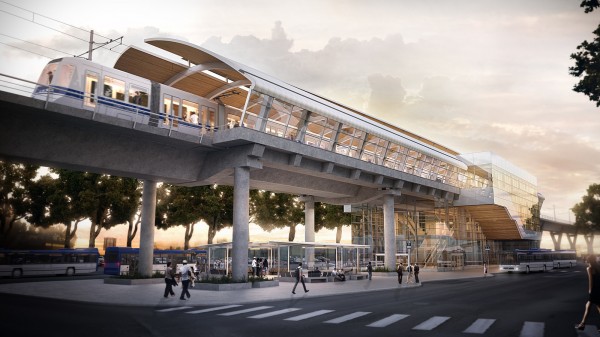 Exterior rendering of proposed Wagner station, the only 'station' being built on the SE leg of the LRT line. Photo Credit: City of Edmonton.

The proposed widening of 75th Street to six lanes as part of the southeast LRT project was recently discussed in an article in the Edmonton Journal. In the article, it is suggested that this work is needed in order to relieve congestion along 75th Street between Whitemud Drive and Wagner Road – and possibly as far north as 101st Avenue. This roadway comprises the eastern portion of Edmonton’s inner ring road. The impacts of this project, if it is extended north of Argyll Road to 101st Avenue, could have damaging effects on the neighbourhoods north of Argyll Road by further increasing traffic flow along 75th Street.

A major fallacy in the logic of this street widening project is that it will reduce traffic congestion. In fact, in addition to making streets and neighbourhoods less safe, street widening simply does not work as a means to abate traffic congestion due to the phenomenon of induced demand. Induced demand describes a situation where increasing the supply or capacity of roadway decreases the time-cost of driving, causing more people to drive and consequently, eliminating any short term reductions in congestion.

This fact has been recognized in a number of studies – most notably, in a landmark study by Duranton & Turner at the University of Toronto (“The Fundamental Law of Road Congestion: Evidence from US cities”). This study concluded that “increased provision of interstate highways and major urban roads is unlikely to relieve congestion of these roads.”

So what about LRT? The Southeast portion of the Valley line travels along 75th Street between Whitemud Drive and Wagner Road before veering west to 83rd Street. The Valley Line will cost a reported $1.8 billion. A report to City Council’s Transportation Committee suggests  that roadways along this line will operate with increased delays, reduced auto levels of service, and that the LRT “will advance the auto impacts in the short term.” However, in the long term, it is not inconceivable that the increased time-cost would push some auto commuters to the LRT. This is something the report does not acknowledge. My question is: if the city is investing so much in LRT, why are we talking about making it easier for people to continue driving?

In Jeff Speck’s latest book Walkable City, he explains how removing ‘vital arteries’, rather than creating congestion, actually has the effect of removing traffic from our streets. He calls this effect ‘reduced demand.’ While this is likely not a realistic or prudent option for 75th Street, a good compromise would be to keep 75th Street to its current configuration of four lanes. With increased emphasis on LRT investment in Edmonton, it is important not to undermine this transformative project by focusing on increasing roadway capacity. By doing so, we are only making it easier to drive and making it less likely that Edmontonians will use the LRT as part of their daily commute.