Thanks to coverage by the Journal’s Elise Stolte, there has been healthy debate on the vision of Edmonton Transit’s network and whether or not it should be designed around ridership or coverage. There are legitimate arguments for both sides and unfortunately there will be tradeoffs and either-or priorities made. Complex questions, among many others, need to be answered to inform the overall design:

This debate, however, has primarily focused on whether there should be a reduction of suburban routes in favour of high-frequency ones. Although this will be a large determinant of how Edmonton Transit will operate, we should also look at additional considerations for the system including the number and distribution of bus stops, implementing bus rapid transit and bus lanes, or the scheduling of routes.

For the purpose of this article, I’m going to focus in on one feature of Edmonton Transit that should be revisited and debated – pulse scheduling.

What is pulse scheduling?

According to Jarrett Walker of Human Transit, a pulse is a “regularly scheduled event, usually happening at the same time each hour, in which transit vehicles from a range of routes are scheduled to all meet together…  A group of hourly local routes, for example, might all come to the pulse point between :22 and :25 after the hour and leave at :30.” Edmonton was one of the earliest adopters of this system, but it did so at a different scale than it exists now. Outlying centres were the pulse points to downtown and they would run frequently. This was an excellent system since the transfers from local to main routes were seamless.

With rapid suburban expansion, however, these original pulse points no longer serve as the outlying transit centres where all local routes meet. Along with budget cuts during the 90s, we now have a system where some main lines don’t run often or pass through several transit centres before maybe heading downtown. In effect, the pulse system does not work optimally. Bus delays occur frequently due to more pulse points, increasing traffic, and longer route distances resulting in many missed transfers and long waits.

Another issue of a not-so-optimal pulse system is that buses travelling along common routes (e.g. the 4 and 7 along Whyte Avenue) tend to cluster within a minute or two of each other. If a rider misses all these buses within that small time frame, the next available bus will not likely come until the next 15 or 30 minute interval. This is quite infuriating for the many riders wanting to travel relatively short (15-20 block) distances. Modifying or removing the pulse timing of these buses will not only increase the apparent frequency of transit along certain streets, but will also retain the coverage that these buses provide. Of course, this would come with the tradeoff of potentially confusing new riders. 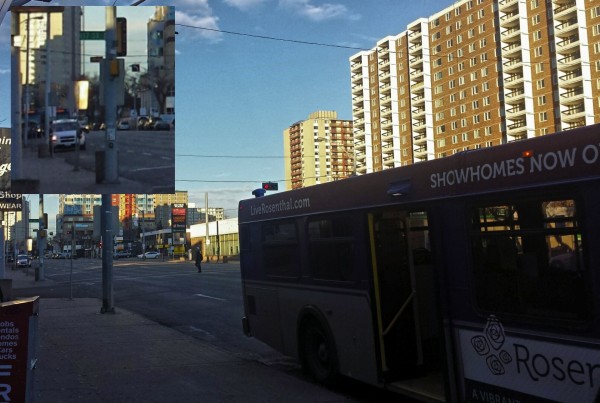 Three buses close behind one another on Jasper Avenue (corner of photo zoomed). Two buses have arrived on schedule and one is arriving late. Photo: Paul Giang at 8:47 AM, weekday.

That said, my main point is that we need to examine many aspects in addition to the ridership versus coverage dichotomy when visioning and debating the future of Edmonton’s bus system. Part of that debate will require better data on transit to fully understand the role different parts of the network play. With smart card and GPS technologies being integrated with buses in the future, I look forward to having that information to help guide and improve Edmonton Transit for everybody.