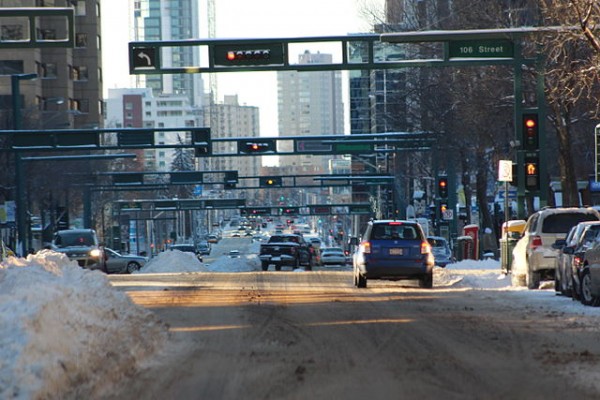 Last winter I had an experience that changed the way I saw urban design.

It was mid-February. It was one of those days that was so cold that the city seemed to be blanketed in a mist of ice. Certainly not a day one wanted to spend outside for too long.

I was on my bike, waiting to cross an intersection in downtown Edmonton. That winter was the first that I had decided to participate in winter cycling. I bought an old beater mountain bike with some studded tires. It was the best decision I had made in a long time. Winter cycling is a lot of fun.

So there I was waiting at the light, which seemed to be red for an eternity. To my right, there was a pedestrian waiting for the light to change as well. He wasn’t wearing a winter jacket, or gloves for that matter. He appeared to have mobility issues. He was pushing a shopping cart which I later realized was doubling as a makeshift walker. We looked at each other and had a moment of shared frustration as we were patiently waiting for the crosswalk man to appear. The delayed crossing allowed us time to share some small talk, so I decided to jump off my bike and stand with my new acquaintance, who I’ll call John.

The time finally came that we were given permission to cross. I walked with John as he slowly moved one foot behind the other whilst pushing his cart over the ruts in the snowpack made by vehicles. It was a visibly taxing process for him, and difficult for me to watch. The occupational therapist in me grew agitated with the lack of accessibility this man experienced. We neared the midway point in the intersection when the menacing stop hand began to flash, and quickly went to a full stop.  The lights had changed and we were stuck in the middle of the intersection.

That’s when John said it.

“Sometimes I think this damn city is trying to kill me!”

John had made a valid point. While there wasn’t an explicit intention to harm him, by virtue of the way the infrastructure was designed, John was regularly put in harm’s way. 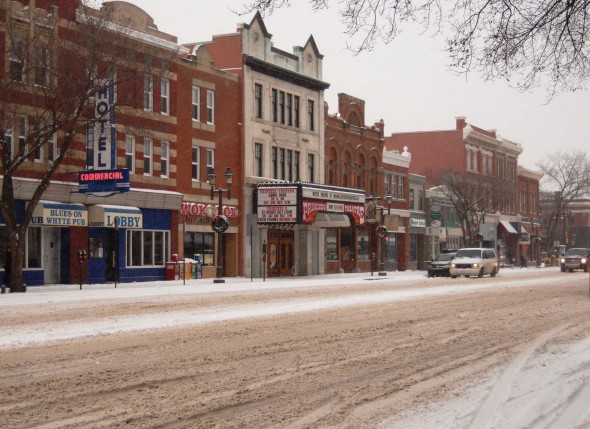 I have, on many occasions, uttered a similar sentiment. I primarily use cycling and walking to get around the city. I’ve cursed under my breath while waiting at signaled crosswalks that seem to take forever to “allow” pedestrians to cross only to give them a very short time to do so. On a regular basis, I dodge cars while attempting to use a crosswalk to get across Whyte Avenue and 102 street. Last week, I had a near miss almost every day. And I have the privilege of being an able bodied person that can quickly step back as an unknowing driver almost runs over my foot.

While reflecting on these issues, I was brought back to a workshop I took this past summer given by the Stanford Design Thinking School. I see the problems I identified as primarily an issue of design, or rather the lack of thoughtful design. Design thinking helps in creating services and products that put the user experience at the core of the design process. The foundation of the approach lies in the “empathy” step – empathizing with the user and caring about how they feel. Empathizing is done through observation of the user as well as qualitative interviewing. When something is designed with empathy in mind, the result is an experience that meets the user’s needs.

Assessing John’s experience, I’d contend that his perspective wasn’t taken into account when designing that intersection. Having significant mobility issues made waiting for excessive periods of time without moving difficult. Add to that the severe cold. When he finally had the opportunity to cross, the ruts in the road created additional challenges for him. And to top it off, the time given to him to cross was certainly not enough, and left him stranded in the middle of an intersection fearing for his life.

John’s experience with using that crosswalk was riddled with anxiety. Speaking with him afterwards, he stated “Sometimes I feel invisible here”. That really sat with me.

I was quite bothered by John’s disclosure. To me, (beyond it being a matter of safety) it came down to dignity. John and many others like him are hard-pressed to navigate their cities with dignity. Something as seemingly trivial as pedestrian infrastructure has huge implications on how people see themselves. Having to dodge speeding vehicles on marked crosswalks (without adequate signalling to alert drivers) could communicate that that person’s particular experience is not worthy of concern. Or that their safety isn’t a priority.

I think that we have a ways to go when it comes to improving the pedestrian experience in Edmonton. I don’t think that the problems identified here are Edmonton specific — I know that other cities struggle with this. That said, I believe that it should be at the top of our list of priorities. I think our aspirations to be a vibrant city depend on it. I also strongly believe that our desire to be an inclusive city requires that we acknowledge that not everyone drives a car — and this should be reflected in the design of our streets and roadways. Design of our spaces governs our lives. It determines the way we move and the way we experience the world and accordingly influences how we see ourselves. More attention needs to be paid to this as we build our cities. While these issues may seem inconsequential to some policy makers, I am convinced that our dignity lies in the details.