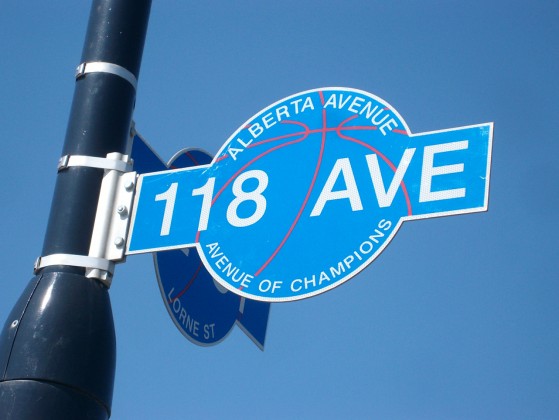 At some point, it would seem that every visitor or newcomer to our city will be asked to visit the Whyte Avenue strip. It’s not hard to see why, as the street can be considered this city’s finest pedestrian promenade and centre of urban living; with independent businesses, theatre/live music venues and surrounding neighbourhoods made up of historic homes. The street level energy that can be found in this area belies the notion that Alberta’s capital is a city focused only on it’s famous megamall. However, you could be forgiven for wondering where other vibrant urban neighbourhoods lie in the city, especially considering that other major Canadian cities such as Montreal, Vancouver and even our Albertan rival Calgary, contain multiple busy historic main streets that act as focal points for city life.

The fact is that Edmonton does have a number of these urban streetscapes; examples of which include 124 Street south of 111 Avenue, 97 Street in the Chinatown area as well as 107 Ave between 124 Street and approximately 101 Street. All of these neighbourhoods have differing characteristics; a few function as the main business streets of immigrant areas1 while others trend towards the upscale.2 However, thus far, none have the citywide cachet that Whyte does, nor the pedestrian vitality (although this statement is based only on personal observation by this author, rather than a more scientific study). The municipality is working hard to change this, with efforts at promoting residential infill3 and an overall strategy that prioritizes the kind of vibrant neighbourhoods that these retail strips anchor.4

So far, I’ve neglected to mention one important urban main street in Edmonton: 118 Avenue. More than any of the previously mentioned areas, it epitomizes the growth, stability and decline in inner city neighbourhoods, while potentially giving us clues to how sustainable, energetic urbanism can be built in this city.5

Currently one of Edmonton’s oldest neighbourhoods, the 118 Avenue area has a rich history. First subdivided before the First World War and with an urban form largely complete by 1912, the neighbourhood has suffered decline since the 1970’s; in line with many historic areas of the city. Indeed, this continuing cycle of decline and poverty is common throughout inner city areas in North America during the previous three or four decades. The causes of these declines are complex and won’t be listed here in detail but they range from the suburbanization of the middle class, capital flight from the urban centre to the periphery, failure of the public sector to invest in ageing infrastructure and pervasive racial inequality (Canada’s urban aboriginal population, heavily represented along the 118 Avenue corridor, have experiences comparable to African Americans in the cities to the south6). Obviously this is not a complete list but it brings into perspective the shattering processes that have shaped inner urban areas such as 118 Avenue.

However, it is apparent that the decline of inner cities has begun to be reversed in much of this continent and Edmonton has not been immune to the trend. Indeed, Whyte Avenue is a good example of this process as the areas surrounding it did suffer much of the disinvestment and decline that are seen on 118 Avenue; but the combination of influential community involvement in revitalization and the return to the city of the middle/professional classes has made Whyte the city’s premier nightlife area, as well as arguably the most pedestrian friendly zone in Edmonton. The economic decline of Whyte in many ways was it’s salvation, as the pre-First World War architecture was preserved by this relative abandonment. 118 Avenue also has a pedestrian friendly historic streetscape as it has been spared the kind of wholesale redevelopment that transformed Jasper Avenue and other areas of the city.

Thus, the 118 Avenue area is potentially ripe for the positive changes that made Whyte Avenue the key retail strip of our city’s most beloved urban neighbourhood. However, simply because it is possible may not mean that such a complete transformation is desirable. Whyte and the surrounding neighbourhoods of Old Strathcona and Garneau have become very expensive places to live and the extreme popularity of the area has led to high rents and national chains making inroads, driving out many of the small independent businesses that were such an important part of the revitalization’s success. The debate over gentrification and whether it displaces the poor is still in full swing but shopping for affordable daily necessities in the Whyte area is certainly more difficult now than it was when the neighbourhood was primarily lower income. Since 118 Avenue and the surrounding area is a source of (relatively) affordable rental housing and the businesses along the strip cater to those seeking cheaper purchases, complete change would potentially make it more difficult for people of modest means to live in the area. In fact, impending gentrification of other Edmonton neighbourhoods, such as the Boyle Street area, has already received negative attention from academic observers: because emphasis on attracting middle class and urban professionals ignores the existing residents, their support networks and the history of the area.

All of this being said, in order to reduce car dependence and urban sprawl, some form of return to the city needs to be encouraged in Edmonton and as part of the municipal plans referenced earlier, residential infill and the creation of Complete Streets are a part of civic policy, and a comprehensive revitalization plan has been in place for the 118 Avenue area since 2005. These are all positive developments but the big question is, is this process simply going to be a repeat of Whyte Avenue’s trajectory or have lessons been learned by all of those involved? Speaking to those taking the lead at the grassroots level, as well as looking at how the City has involved itself in the process gives this author hope for the future.

When one examines the goals set out for the 118 Avenue revitalization, it appears that fears of the municipal government trying to promote displacement through gentrification are unfounded. The ongoing initiative focuses on safe streets and spaces, community engagement, vibrant small business activity and overall neighbourhood well being. Nothing points to any emphasis on complete redevelopment; rather the focus would seem to be working with existing residents to improve safety and make the area an attractive part of the city to live or to visit. There has been some developer interest in the corridor, but in contrast to the maligned Boyle Street plans, construction of new condominiums is supposed to be relatively limited and will serve to increase the income mix of the area; rather than complete demographic change.

A notable feature of the 118 Avenue area is a robust community interest in this kind of urban transformation. Arts on the Ave has been the standard bearer of grassroots revitalization efforts; with a focus on making local creative communities the major force in the redevelopment process. Speaking to representatives of Arts on the Ave, it would appear that this organization has far more confidence in municipal revitalization efforts than those community groups involved 10 years earlier in the beginning stages of the Boyle Street efforts. Also, while many media outlets have latched onto the idea that 118 Avenue is going to become the ‘Next Whyte’, this organization is optimistic that the area will remain affordable and welcoming to communities outside of the young professional demographic traditionally favoured by gentrification. In fact, their major worry at this time is the negative effects that Alberta’s economic downturn could have on inner city revitalization throughout the city, not just on 118 Avenue.

After looking at the City’s plans for the 118 Avenue corridor and speaking with Arts on the Ave, this author is cautiously optimistic that the neighbourhood and those invested in it’s transformation have laid the groundwork for continued revitalization; one that avoids the pitfalls of Whyte Avenue’s success and maintains the human scaled businesses, streetscape, affordable housing and plethora of artists that is making the area more popular as time goes on. It’s encouraging to see that traditional retail strips in Edmonton are becoming focal points for urban revitalization, especially since as a ‘newer’ Western city, these types of pre-Second World War neighbourhoods are in short supply. It will be interesting to see how the current economic downturn affects these revitalization efforts and if the return to the city trend in Western Canada is robust enough to continue.

5For this article, I’ll be taking about the ‘historic’ section of 118 Avenue: roughly covering the nighbourhoods of Westwood, Alberta Avenue, Eastwood and the Northlands area.