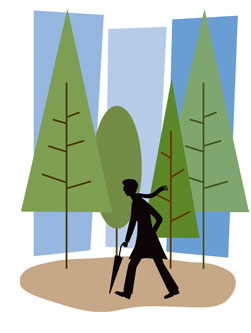 The opening lines of Robert Frost's "Stopping by Woods on a Snowy Evening" read "Whose woods these are I think I know. / His house is in the village, though; / He will not see me stopping here / To watch his woods fill up with snow." Though he's writing about a semi-rural area, there's something about the proximity of those quiet woods to the nearby village that makes Frost's poem seem cozy and urban — how wonderful it would be to walk through a forest on the way to a friend's house or to get to a tavern or movie in another part of the city.

In Toronto the best of nature and the city often intersect, and if you're willing to head into one of our ravines — some of which are strategically poised between various points A and B — you can easily take the road less traveled but more wooded.

Yet the wildest and deepest wilderness, one perhaps closer to that Robert Frost moment, is found in Rouge Park, one of the world's largest natural environment parks in an urban area. It technically runs from the Oak Ridges Moraine down to Lake Ontario along the far east side of Toronto. The park ends at a nice beach with a good view of the Pickering Nuclear Generating Station, a fine backdrop for any picnic or urgent romantic moment. Away from the water, up the Rouge Creek in the northeast corner of the city, are a series of hiking trails that start just off of Meadowvale Road, across from the Toronto Zoo — easily accessible by the 85 Sheppard East bus. The landscape here is closer to cottage country and Algonquin Park than to Yonge and Bloor or even Trinity Bellwoods — but it's all within the city limits.

The downside to wandering though this somewhat untamed chunk of big country Toronto is the lack of essential urban services like espresso machines. The closest one to these Rouge trails is found a couple of kilometres east, on Sheppard. It's an undercover Second Cup, hiding in the lobby of a giant Home Depot. You can get off the bus early for coffee and lumber supplies, but watch out how you order — the double Americano I asked for became some kind of caramel and whipped cream dessert coffee. Out here, coffee is either straight-up filtered Columbian or overly deluxe and fancy — there is no in-between.

The walk from the Home Depot to the zoo is wide open — lots of traffic lanes and high-voltage wires passing by a few old homes on Sheppard that were there when the road was two lanes wide, hardly traveled, and part of something called "Scarborough." The "Vista" trailhead is a short distance up Meadowvale from Sheppard, across from the zoo at an interpretation building called the Pearse House. The house, a standard period Ontario farmhouse, was built in 1869 as the homestead for James Pearse, Jr. He and his brothers operated a sawmill nearby. The sign at the beginning of the trail lists a number of organised tours that start from the Pearse House, including an "animal tracks and scat reading" winter walk for what must be an audience of hardcore rural enthusiasts — a scatological adventure that probably won't be advertised in the back of Eye Weekly or NOW.

A few minutes down the Vista is a bench that has one of the best views in the city, but not of the city. The bench doesn't look at the CN Tower or any part of the skyline, but rather across the 100 meter