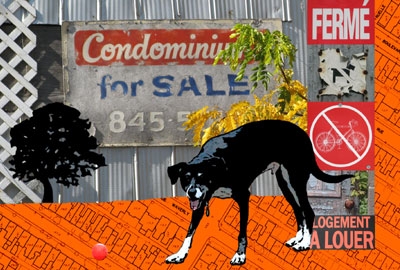 in absentia, a web-based art project presented by Dare-Dare, reads as a cross between a map and a novel. When you have lived in a place for long enough, every street corner is inhabited with memories and meaning, and a tour through in absentia feels like exploring a much-loved place with a long-time local.

The artist behind the work, JR Carpenter, is also releasing her first novel, Words the Dog Knows, this Friday November 7th. The novel and web-project co-evolved and draw on many of the same stories.

Over café au laits at Club Social on Saint-Viateur, JR Carpenter says she vowed to move to Montreal and study art as a 12-year-old growing up in rural Nova Scotia. In preparation, she read books set in the city. By 1992, she found herself living on St-Urbain street, in the exact neighbourhood she had discovered through Mordecai Richler’s stories as a child…and writing about her old life on the farm.

It wasn’t until nearly 15 years later that Carpenter felt able to write about this city with the familiarity of home rather than the wide-eyes of a beguiled visitor. Many of her texts began as oral stories – scenes spied in neighbours’ windows or overheard in back alleyways: a cursing Greek matriarch, kids splashing in a back-yard pool, an upstairs neighbour’s urgent  love-making.  An earlier web-based work, Entre Ville captures the inevitable voyeurism of the neighbourhood’s close quarters.

But by this time, Mile End was caught in a whirlwind of gentrification. “I had finally figured out how to write about the neighbourhood and then it was all being ripped out from under me,” Carpenter says.  In absentia is about the effects of gentrification: people’s lives and stories uprooted by the turnover of property ownership.

“I talk about it on a minute scale instead of the big issue, which is sort of unbearable,” Carpenter says. “A lot of those small things have to be documented – otherwise they will just disappear.”

Teaming up with other writers and artists, both English and French, Carpenter gathered dozens of stories about her neighbourhood and linked them together in space, using a map of the neighbourhood. She says that her use of the Google Maps API as a backdrop for In absentia was a deliberate appropriation of a sterile medium.  She imagines that the impersonal Google Maps grid is how a developer might view the city. In absentia interrupts this disengaged perspective and, by situating shared images and experiences right on the map, creates a sense of place.