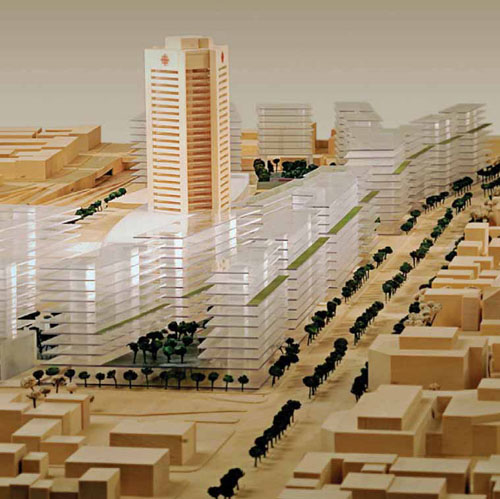 The Office de Consultation Publique de Montréal is holding and information session and three workshops this month on the Radio Canada’s site.

This post by Guillaume St-Jean describes how the site was once a bustling neighbourhood that counted 778 homes, 12 groceries, 13 restaurants, 8 garages, 4 print-shops and 20 factories. Once known as the Fauboug M’lasse (molasses town) because of the smell that permeated the dense, working class neighbourhood, this area was home to 16,000 people in 1880. The construction of Jacques Cartier bridge in 1930 sliced the area in half and demolished several industries and residences. After a further decline throughout the ’50s, the remaining 5000 families were evicted in 1963 to “clean up” Montreal’s downtown area. The Radio Canada tower was built in 1973.

The new plans for the site include 2000 housing units, offices, commercial space, and public spaces. Furthermore, the new development would re-link the street grid through the site. The $1.6 billion investment basically strives to recreate the dynamic neighbourhood that existed mere decades ago, without the industrial stink. Pardon my cynicism -I know we can’t erase the past.

There is a ton of further information on OCPM’s website, and you can also attend the information sessions and workshops this month: