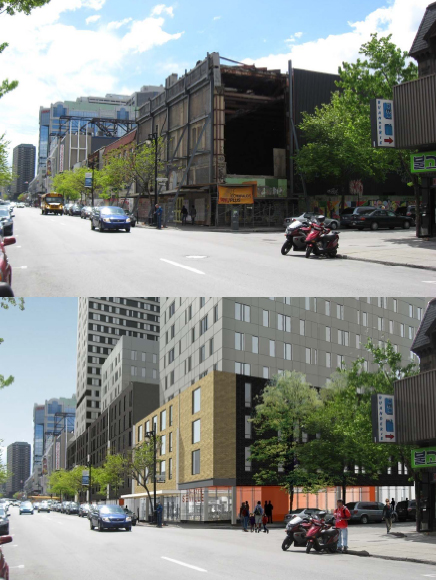 The Seville theatre in 2009 (above) and the planned Seville Residences (below) from a presentation by Cardinal Hardy and A CD F Architects, April 7th 2009 (PDF).

The developers behind the Seville Residences, which would demolish the historic Seville Theatre block on Ste-Catherine West in order to rebuild 1500 student housing units, retail, commercial and community space, have not underestimated the attachment that Montrealers have to our built heritage.

Although the Seville Theatre, which was built in 1929 and closed in 1985, is designated as a building with exceptional heritage value, all experts agree that the mouldy, crumbling brick facade is unsalvageable after 25 years of abandonment.

Even though preserving the original facade is virtually impossible, the developer commissioned a report by two UdeM architects, Jacques Lachapelle et Mario Brodeur, critiquing Montreal’s approach to heritage preservation and facadism in particular.

The report (pdf) is brings up some good points, including that Montreal’s 2004 urban plan designates almost the entire borough of Ville Marie as having heritage interest (map of Montreal’s built heritage), creating constraints on the space available for innovation and the flexibility to accommodate changing usages, demographics and ideals.

The two architects go say that facadism – the preservation of a historic facade within the context of a new construction with profound stylistic, volumetric and structural differences – as reducing our history to a mere image. When there is a lack of consistency between a building’s exterior envelope and its interior function, the authors ask, can facadism really be considered “good architecture”?

The Architecture of Evocation

None-the-less, the architects of the Seville Residences recently updated their original plans to include a “reminiscence on the facade of the old Seville Theatre,” an allusion to the theatre’s silhouette in yellowish brick.

In another instance, the 16-story hotel that will replace Ben‘s will incorporate a rounded corner and other architectural details recalling the demolished Deli.

Neither developer has a formal responsibility to acknowledge their site’s past, yet both are choosing to evoke the institutions that were beloved by many Montrealers through modern architectural symbols.

Is this an effective compromise between clearing the slate for innovative design and giving shape to our collective memory? Or is it a gimmick meant to provide a little authenticity to an otherwise uncreative design?

Is it, perhaps, the architectural equivalent of a buying a Clash t-shirt at Urban Outfitters?

Perhaps this kind of superficial reference to the past is a sign of the times. Last summer, Adbusters magazine wrote a scathing article that applied similar criticisms to Hipster fashion and art:

“An artificial appropriation of different styles from different eras, the hipster represents the end of Western civilization – a culture lost in the superficiality of its past and unable to create any new meaning.”

Personally, I love the patchwork quality of streets like Saint-Laurent, in which architectural styles from the 1890s to the present are shoulder to shoulder. My instinct is to preserve historic facades in order to maintain an element of diversity in the streetscape. But then again, I am from the same generation as the aforementioned hipsters…

In any case, here are a few examples of facades from around town to fuel the debate: The Beaux Arts condos on Sherbrooke West hide the entrance to this high rise. In this instance, the Greystones also conserve their individual entrances.

And here’s a list of other instances of facadism from the report mentioned above (untranslated):