The NDG Jane’s walk earlier this month ventured “below the tracks” to an area that is as fascinating as it is has been isolated over the ages, initially by a natural escarpment, and then by rail and highway development. After talking about the experience with local architect Gavin Affleck, he sent these two aerial photos of the Turcot and Glen yards.

The photo above which dates from around 1930 is centred on the Glen yards which were run by CP. The massive CNR Roundhouse is clearly visible in Turcot yards in the lower right corner.

The cluster of residential streets in the lower central part of the photo is the tip of Village des Tanneries. In the present-day photo below, you can see that the Turcot interchange has lopped off most of the homes to the north of Cazelais street, and the new proposal for the highway would finish off the job, expropriating hundreds more residents.

But the neatest discovery in this photo ia the small, terraced agricultural plots at the base of the Saint-Jacques escarpment, which must have been planted and harvested by Saint-Raymond residents.

Around 1966, the tentacles of the interchange can be seen creeping into the Turcot yards but the project is still in its infancy. Near the left of the image, are the flattened remains of Minto street, a residential street between Addington and Prud-Homme that was completely flattened to make way for the Decarie Expressway. Just below that, the concrete pylons which would support the elevated highway rise like a row of dominos. 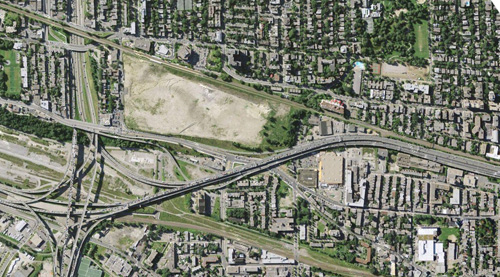 Hard to believe that, in less than a century, this site has been shaped by the coming and going of so much infrastructure and is about to undergo yet another massive overhaul. This 2009 google map will be obsolete in a matter of years. The CPR sold Glen yards in 2001 and the land is currently being decontaminated (ie: dug up and shipped out), to make way for the MUHC Superhospital. The BAPE environmental public consultation on the Turcot project are also underway this month.

But there is less moving and shaking going on around the Saint-Jacques escarpment (falaise Saint-Jacques) This photo shows only the eastern-most tip of the 3-km wide green strip which may or may not consist largely of junked cars, trashed household appliances, and rail-yard debris.

The escarpment is labeled an eco-territory by the city of Montreal and for decades there has been talk among community groups about creating a nature park, cycling link and interpretation centre. But the only thing to show for it so far is the occasional cracked slab of concrete which litters the cliff, remains of a bike path which was constructed in the ’80s and then never used because it had no legal access nor destination. I’ve also heard its great spot for birdwatching, assuming you don’t mind crawling through chain-link to get in.

Nikki Shiebel, NDG Eco-Quartier coordinator and my co-host of the NDG Jane’s walk, explains that, since the territory belongs to 3 different boroughs with a couple of private owners thrown in for good measure, and because “eco-territory” is essentially a meaningless term coined by the city, the chances of this green space becoming accessible – or even cleaned up for the benefit of wildlife – are pretty slim.

In the meantime, at least one creature is enjoying the inaccessibility of the escarpment: this is one of two Montreal area sites were you can find an particular species of endangered little brown snake.