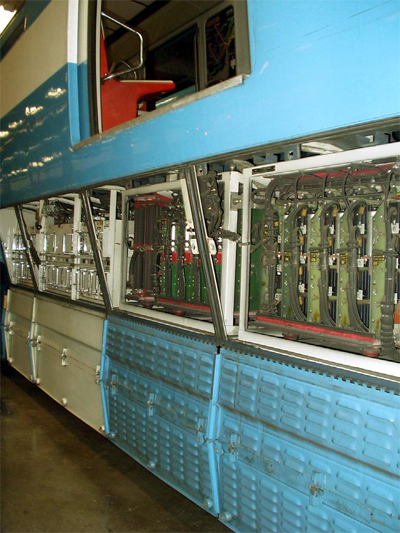 What are your favourite sounds of Montreal? Mine is the lovely chord that the metro trains make when they start up – you know, the one featured in the campy 70’s metro ad “Il fait beau dans le metro.”

According to a friend with perfect-pitch, the notes are F-Bflat-F, a Bb5 chord. He suggests Beethoven’s 4th or Elton John’s Can you Feel the Love Tonight as musical matches for your metro-riding enjoyment.

The STM explains in more technical detail than I can grasp that the dou-dou-dou sound is a by-product of the 1970s vintage current-chopper. The three audible frequencies are caused by the incremental increase of current to the motor. Since the whole system was custom-engineered for MR-73 metro cars, Montreal’s subway system is unique in running to the tune of Bb5.

But the dou-dou-dou is, in the long run, doomed, as the 35-year-old trains are to be replaced with new, more hushed technology. In September, the STM negotiated was in the process of negotiating an order for 765 new metro cars, which will would be manufactured in Quebec by Bombardier and Alstom over the next 10-12 years.

The 340 MR-63s cars, which have been rolling since 1966 on the green line will be replaced first. If all goes according to plans (but does it ever?) the melodious ’73s will be replaced by 2021. That means we wtill have lots of time to appreciate this little idiosyncrasy before “Il fait beau dans le métro” has to go acapella.

Image: The current-chopper is situated underneath the metro’s motor cars. Each train has 9 cars, two of which are motor cars. Image from Info STM: Le hacheur de courant