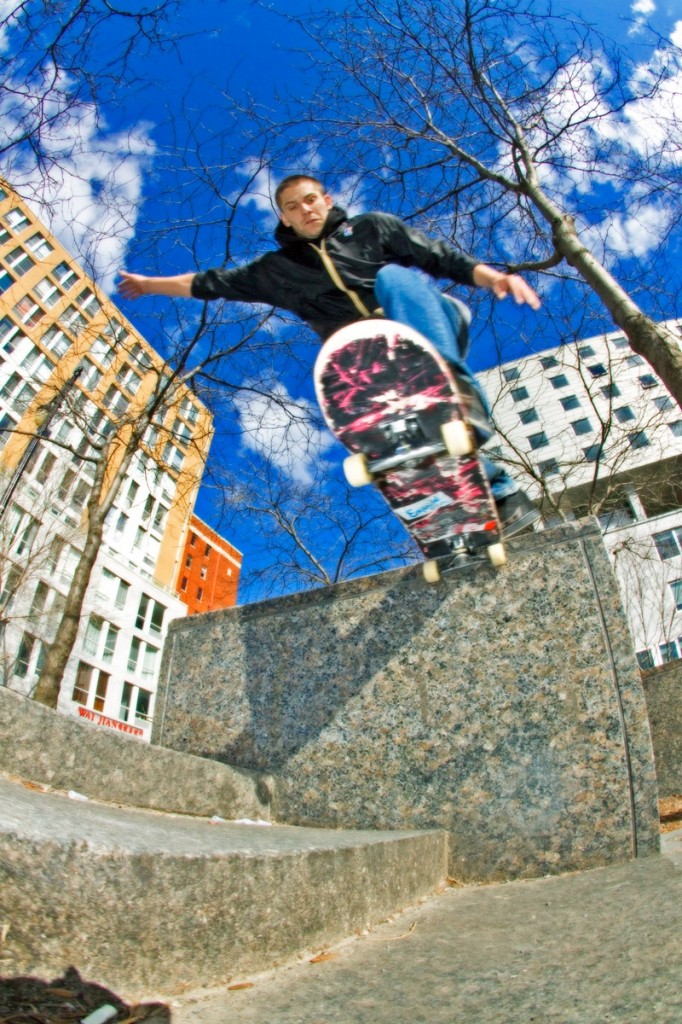 David Bouthillier on his skateboard in Peace Park. Photo by Danny Stevenson.

After talking to David Bouthillier for half an hour I start to see the urban landscape in a whole new light.

We sit perched on one of the raised platform that borders Place de la Paix, just next to the Société des Arts Technologiques on the Lower Main. Bouthillier, a pro skateboarder, sights along the inside edge of the granite slab where it comes to a corner: “You can jump over the first block and then slide the inside ledge, like that’s pretty fucking tough,” he says, “Or you could go onto two wheels and then fall into the ledge. You’ve gotta be creative; it’s an art form.”

Bouthillier says that Peace Park has been the heart of the street skateboarding scene in Montreal since the public square was inaugurated in 1994. It’s centrally located, a number of trees provide shade, the park equipment is made of granite so it’s ideal for performing skateboard maneuvers, and the ledges are just the right height – 19 and a quarter inches – to be challenging. Yes, he’s measured.

Furthermore, he says, the park’s got great flow – three of its sides are lined with the granite slabs, broken up only by a pair of staircases on which the skateboarders also perform tricks. A talented skateboarder can keep moving as long as they can keep their board under their feet, in contrast to a half-pipe where people have to wait for their turn to slide back and forth.

There’s just one problem: skateboarding remains illegal in Peace Park. So when one of the skateboarders spots a cop car rolling up they holler “five-oh” and everyone hops off their boards and sits down. Anyone caught wheeling around can be slapped with a $653 fine for “using urban equipment for uses other than those intended.” Over ten years, Bouthillier says he has had 4 boards confiscated and racked up $7000 in fines, but he never considered quitting.

“You got to break the laws before they change, right?” he says, “and there’s nowhere else to skateboard.”

In Montreal, skateboarding is allowed on bike paths, on paved paths in parks and in dozens of designated skate-parks. But Bouthillier is upfront about his contempt for the city’s skate-parks: “there’s no creativity: they’re all exactly the same,” he says. He describes how they are assembled from catalogues of park equipment and sometimes put together with little thought for how skaters will use them: different obstacles are sometimes jumbled dangerously close together.

A couple years ago, the SAT recruited Bouthillier to help propose a pilot project which would have legalized skateboarding in Peace Park and added some skateboard friendly infrastructure to the square. The city denied the request. “They didn’t want to have anything to do with it because they were still trying to accomplish their first mission of rebuilding the Taz,” Bouthillier says.

The city had promised to build an indoor skate-park after the original Taz was closed in 2001 to make way for the construction of the Grande Bibliothèque. While the city invested in 7 years of research before building the replacement, Bouthellier says that the admission fees, ranging from $11-$15 per visit, are unreasonable for people who want to practice the sport daily.

The main gripes against skateboarding are noise complaints and damage to urban equipment. However, in 2003 the Court of Quebec established that noise from skateboarding does not constitute a public nuissance. On the other hand, Peace Park does provide some evidence for the latter complaint: the outer edge of the granite slabs has been ground rounded down by nearly two decades of skateboarders. Some of the trees have also been damaged by skateboarding.

But Bouthelier points to many other cracks in the material that are simply due to weathering: with or without skateboarders, some maintenance will have to be done eventually. He suspects that replacing the granite every twenty years would not cost more than building and maintaining a skate-park.

“It’s not a skate park which is nice. It’s an urban space which is good for skateboarding which gives it street credibility,” Bouthillier says. Bouthillier is currently working on a documentary film about Peace Park skateboarding culture.

I get the impression that, for Bouthillier, mastering skating technique is only half the challenge. The other half is figuring out creative ways of interacting with the built environment and that’s something that I can’t help but appreciate.

But whether skateboarders can really co-exist with other kinds of users in public spaces remains to be seen. Tell me what you think in the comments, and I’m going to do my best to get an urban planer’s perspective in a future post.