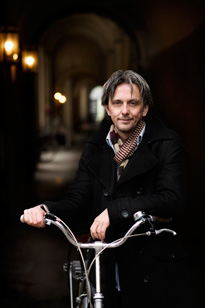 Last year, Kristian S. Villadsen and Louise Kielgast of Gehl Architects visited Montreal to tell us how we might “Copenhagenize” our city (the video of their talk at McGill can be found here) by improving bicycle infrastructure and creating liveable and human-scale public spaces much as has been famously done in the Danish capital, Copenhagen. Montreal, for all its pretences of being a “European” and “bike-friendly” city received failing grades from the urbanists and, having visited Copenhagen myself, I am inclined to agree (not that we aren’t very much ahead of many of our North American counterparts). While much has been done to improve public space in Montreal and cycling is increasingly becoming an accepted mode of regular transportation, much is left to be done.

This week, we will play host to another urban thinker from Copenhagen who will discuss how Montreal could become North America’s great bike city. Mikael Colville-Andersen is well known as an expert on urban cycling and is the author of two influential blogs on the topic: Copenhagenize and the bicycle-fashion photoblog Copenhagen Cycle Chic. Both blogs have gone on to inspire the creation of a number of spinoff blogs in various other cities, including Montreal’s own Cycle Chic blog which he will launch this week.

Mikael Colville-Andersen will be appearing in the auditorium of the Bibliothèque et Archives nationales du Québec at 475 boul de Maisonneuve Est on Wednesday, June 1st at 10h30 am. Entrance is free of charge.