This summer has seen the arrival of two new types of biking infrastructure in Montreal: bike boxes on Milton and a hybrid bike path/lane on St-Urbain. 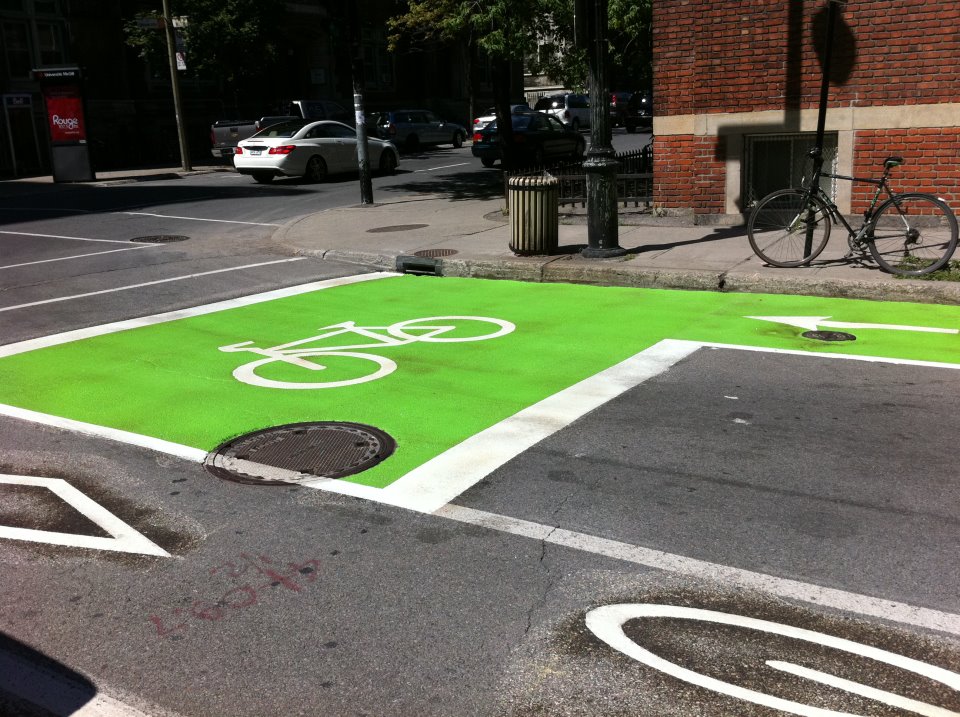 Bike boxes are not a new concept; they’re just new to Montreal. Simply put, they provide cyclists with the ability to stop in front of cars at an intersection, thus improving their visibility and safety. They are generally used on streets with bike paths and a high volume of bike traffic. It’s a technique which has demonstrated its usefulness elsewhere and the question here is how Montreal cyclists, drivers, and pedestrians will adapt to them. The Milton locations are being used as a pilot project and the city will evaluate the possibility of creating more next year. The St-Urbain bike path is the city’s attempt to address cohabitation problems between bikes and buses on this stretch of road. This previous incarnation of the St-Urban bike path had long been criticised by the bus divers’ union as unsafe since cyclists and buses often have to cross paths and compete for space at corners with bus stops. The city’s solution is to have cyclists stick to the far right at all times by having the bike lane go against the curb at intersections, with buses stopping on the other side of a small dividing median. This organisation of space is something new in Montreal. It’s the first time that bikes are being directed between transit stops and the side walk, and it’s also the first hybrid between the protected bike path model and the completely exposed bike lane model.

Experience show that new bike infrastructure tends to bring out strong opinions. So, Spacing Montreal readers, what are your thoughts? Have you had a chance to try out these new features? Are they steps towards ensuring a better cohabitation on Montreal’s streets, or do they create as many problems as they solve?