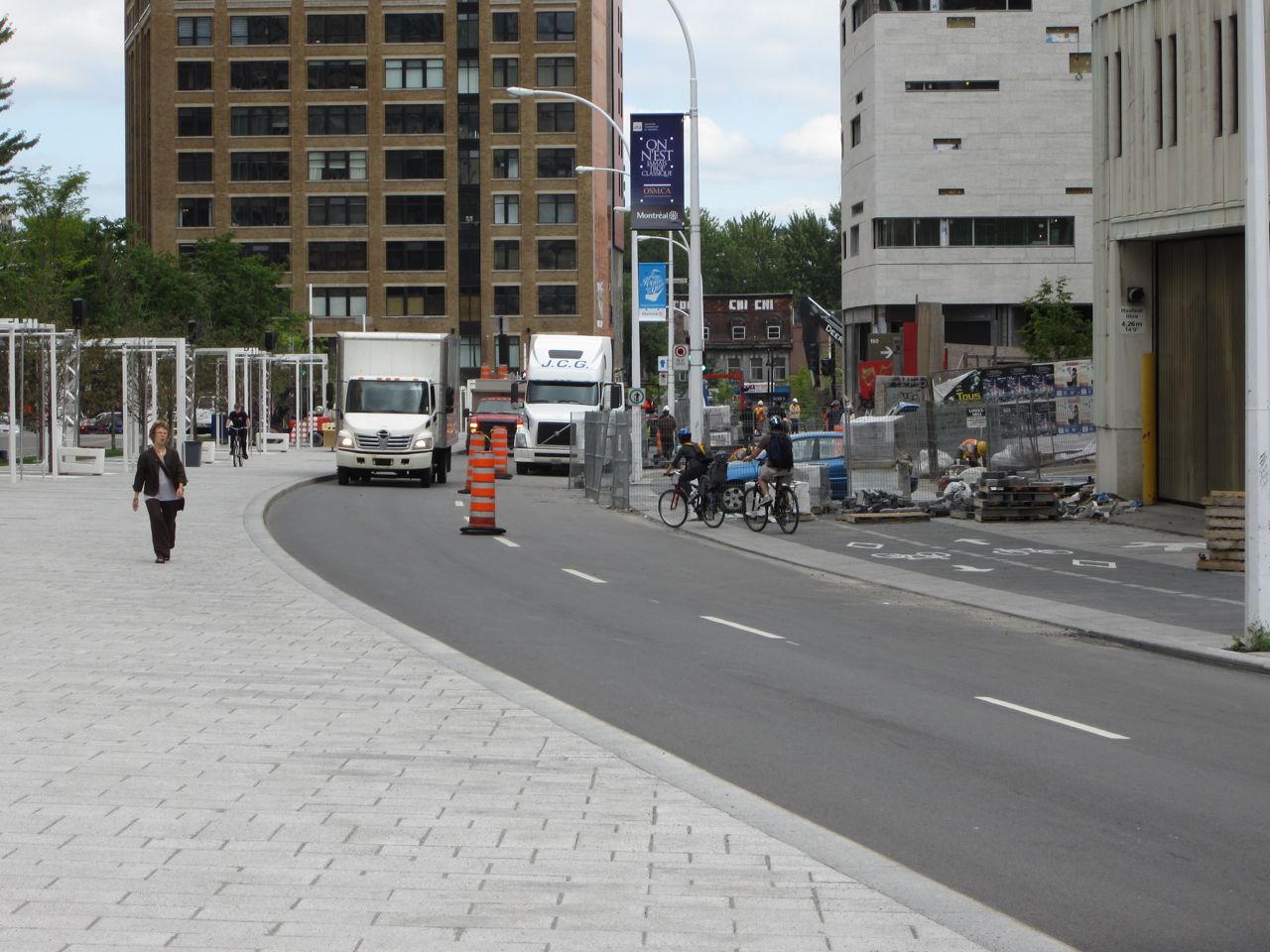 Obstruction on the de Maisonneuve bike path on August 26th

Paul Arcand, the radio show host, often characterizes Montreal as the city-where-no-one-ever-takes-responsibility. Yet, there are instances where the attribution of responsibility is clear, and the QDS bike path debacle is a case in point. The City made the commitment to keep it opened during all of the QDS project and for the most part, it did (other than during the Festivals, of course). However, the safety of pedestrians and cyclists alike was often compromised – especially in the last two weeks. Why?

Given that there is a committee in the QDS whose job it is to ensure that the flow of traffic – regardless of mode – continues despite the heavy duty work being carried out, one might ask whether this whole thing is not just another case of bureaucratic inefficacy. Having first-hand knowledge of the functioning of the Comité de gestion des entrave, I maintain that it was crucial in getting the contractors, the STM, the adjacent landowners and all other actors involved to work together and agree on a “traffic plan” (which updated every week). But evidently that wasn’t enough – contractors often disregard the plan or only comply with it partially.

Whose fault is it then? The contrators’? That would be too easy for an explanation… contractors working for the MTQ on highway projects, whether in Montreal or elsewhere, always (or almost always) comply with the traffic plan. So what exactly is the matter with Montreal?

The City certainly has its share of responsibility in this: the bike path was originally supposed to be on President-Kennedy, as is clearly indicated on p.37 of the original Programme particulier d’urbanisme (PPU), which can be downloaded from here. This would certainly have improved the situation, especially given the number of trucks of all sizes entering and leaving Place-des-arts’ loading dock which is right on de Maisonneuve, where the current bike path is. Yet, the City’s circulation division decided against it, pledging to make the necessary adjustments during the project to allow bike traffic to continue. Needless to say, these adjustments were never made. There were always provisions for a bike path in the traffic plan, and the contractors usually agreed to put up the necessary signage. But then they disregarded their own signage and often parked trucks and backhoe loaders in the bike path, without any consequence. The fact is: the City does not have the same clout as does the MTQ, but it could have imposed much stricter conditions in its contracts and followed through with them.

Believe or not, the Government of Quebec is also to blame in this. Few people are aware of this – and it may seem a bit esoteric to Spacing’s general readership –  but the work site of the new OSM concert hall was not managed by the QDS team or by the City. The OSM concert hall is a PPP project realized by SNC-Lavalin, and as is typical in such projects, the contractor-operator tries to avoid anything that might delay the project or cost money. As a result, SNC-Lavalin often didn’t show up a the Comité des entraves, occupied the public domain without asking the City for a permit or simply disregarded the traffic plan. For example, the trucks parked in the “bike path” in the above picture are actually under the responsibility of SNC-Lavalin. But when asked to adapt to the needs of other contractors and users of the public domain, SNC’s project manager would retort: “If you’re not happy go talk to the Minister”. Once again, a good example of the Quebec government’s colonial attitude towards Montreal: the Ministry of Culture undertakes a large infrastructure project in downtown Montreal, but makes no effort to coordinate the work schedule of its contractor with that of the City. The City and the citizens can always wait.

Last but not least, I would like to take some of the blame myself … and to place some of the blame upon all of you who have used the QDS bike path, nearly got killed near the St-Urbain intersection and did nothing about it. I think this is a very good example of our (Montrealers’) attitude towards authority: we complain about the City to everybody except to the City. We write blog posts about the failure of the bike path, but few of us have actually formally complained (I’ve asked around and heard of a few, but nothing significant enough to scare anyone). We tolerate the mediocrity of our public domain even as we despise the City for it.

I promise you: politicians don’t like trouble. And there are actually politicians who are well-intentioned and care about stuff like this. But very few of them ever use the QDS bike path, so it is our responsibility to let them know that tens of thousands of Montrealers actually do and that it is unacceptable to allow cyclists to risk their lives going to work simply because no one has the courage to tell contractors to step aside or else…