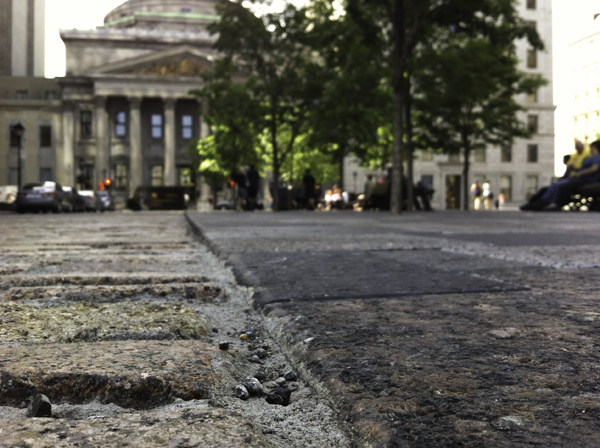 Article and photo by Stephen Potyondi. Stephen completed his master’s degree in history at the University of Alberta. He recently moved from Paris to Montreal, where he spends his weekends exploring the city on foot.

As someone who lives and works in Old Montreal, I have privileged access to the redesigned Place d’Armes, which I see in the morning, at lunchtime, and once again before going home. Its design choices represent a step forward for the liveability of the neighbourhood, which has benefitted immensely from the square’s ability to attract and retain visitors other than tourists. It does so by exemplifying a design approach called shared space, which reduces the dominance of motor vehicles on the street, changing the relationship between cars and pedestrians.

Traditional street design separates pedestrians from vehicles to the maximum extent possible. For safety’s sake, raised sidewalks are constructed to shelter those on foot from cars, whose drivers need only concern themselves with pedestrian movement at crosswalks and intersections. Place d’Armes’ previous design maintained this division, isolating visitors on an elevated concrete island surrounded by traffic, cut off from the architecture which was their principal reason for being there. 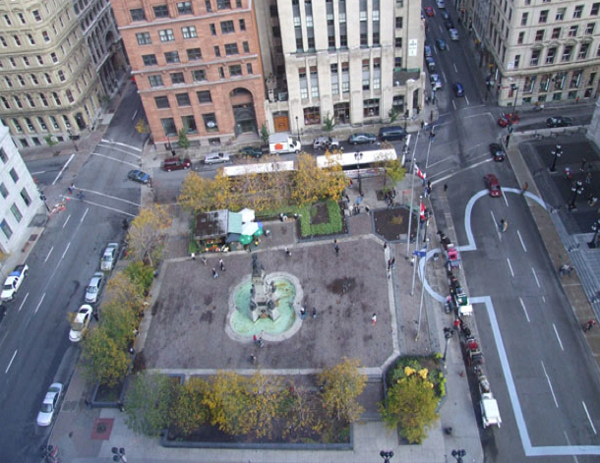 However, the new Place d’Armes allows pedestrians to move freely throughout the square. It accomplishes this feat by omitting traditional sidewalks in favour of a level street surface. This might seem dangerous, but the effect has been to increase road safety as implied priority for cars is reduced, obliging drivers to be more vigilant and reduce their speed. For their part, pedestrians have appropriated the square by largely ignoring official intersections and crossing the street wherever convenient, often slaloming between slow-moving cars. I’ve never seen anyone receive a ticket for this behaviour, partly because it would be impossible to fine so many people, but also because the concept of jaywalking only makes sense when automobiles have an exclusive right to the street. In this, the new Place d’Armes reconnects Montrealers to another aspect of their past.

Creating a shared space may not even have been an explicit goal of the redesign: this concept receives no mention in the redevelopment proposal of landscape architects Cardinal Hardy and Tecknika HBA, whose guiding idea was that the square should evoke Montreal’s history by better allowing visitors to connect to the architectural heritage that surrounds them. Its flat surface was intended to remove physical barriers to pedestrian access, but it has removed psychological barriers as well.

The resulting transfer of ownership of Place d’Armes to pedestrians creates a thrilling sense of empowerment. Don’t believe me? Go visit and spend some time zig-zagging back and forth across the square as drivers accommodatingly approach at low speeds. After any amount of time spent cooped up on the Old Port’s crowded sidewalks the feeling is practically liberating. Comfortable and at ease, visitors linger in the space, encouraged by other welcome additions such as benches and trees.

Unlike the summertime pedestrianization of Ste-Catherine or St-Paul, there is nothing provisional about Places d’Armes’ new organization, which should serve as a model for other public spaces. Montreal is a city rightly praised for being walkable, a value which ought to be further encouraged by its physical design.