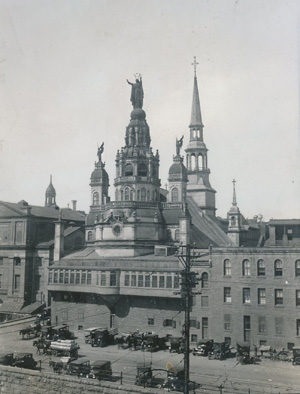 View of the Notre-Dame-de-Bon-Secours Chapel and the Star of the Sea in 2006. Source: Marguerite Bourgeoys Museum 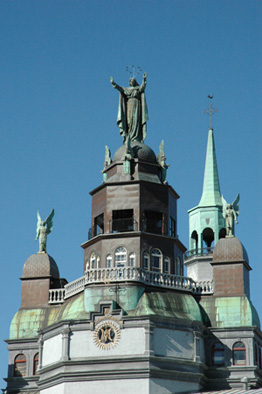 View of the  Chapel in the first half of the 20th century. Source: Marguerite Bourgeoys Museum

This article is a special collaboration with Hatty Liu. Hatty enjoys to toddle around Montreal in search of interesting buildings and uses of public space, then going home to check if they have been written about in Spacing Montreal. It is her goal to write about them, if they have not.

Last month I hosted a trio of friends from Toronto who turned out not to be tourists, but pilgrims, to Montreal. They came armed with a four-line excerpt of an immortal song and were determined to find its subject before the day closed:

“And the sun pours down like honey
On our lady of the harbour
And she shows you where to look
Among the garbage and the flowers.”

These lines were extracted from Leonard Cohen’s “Suzanne.” The “lady of the harbour” referred to the Star of the Sea, a statue of the Virgin Mary that crowns the Notre-Dame-de-Bon-Secours Chapel, known colloquially as the Sailor’s Church. However, we did not learn of this until later, for none of the shopkeepers we surveyed in the Old Port that day knew who the elusive lady was.

Their oversight is surprising. According to Patricia Simpson, director of research at the Marguerite Bourgeoys Museum, the chapel’s current tenant, the place has been a community cornerstone for centuries. The original stone chapel, burned in 1754, was built to the east of city limits and “it drew settlement this way,” said Simpson. After Montreal was conquered by British forces, the chapel became a place of worship for the army garrisoned nearby. It was the first place where English-speaking Catholics in Montreal began to gather.

The chapel began to attract a specific kind of pilgrims in the 19th century, when the symbol of Star of the Sea also grew to acclaim. Standing at the forefront of the harbour, before the Saint Lawrence Seaway forced relocation of the harbour east in 1950s, the chapel became the “Sailor’s Church” where crew and passengers of ships recited last prayers before voyages, and where they gave thanks for a safe passage upon their return.

The Star of the Sea was meant to cement the chapel’s physical and spiritual connection to the sea. “It was the first thing people would see when they enter Montreal and the last thing they would see before they leave, blessing people as they entered and departed,” said Simpson. The original wooden statue was erected in 1848, replacing a painting that had adorned the back of the chapel since the late 18th century. The current, larger statue was installed in 1893 as part of a series of renovations made to the chapel. 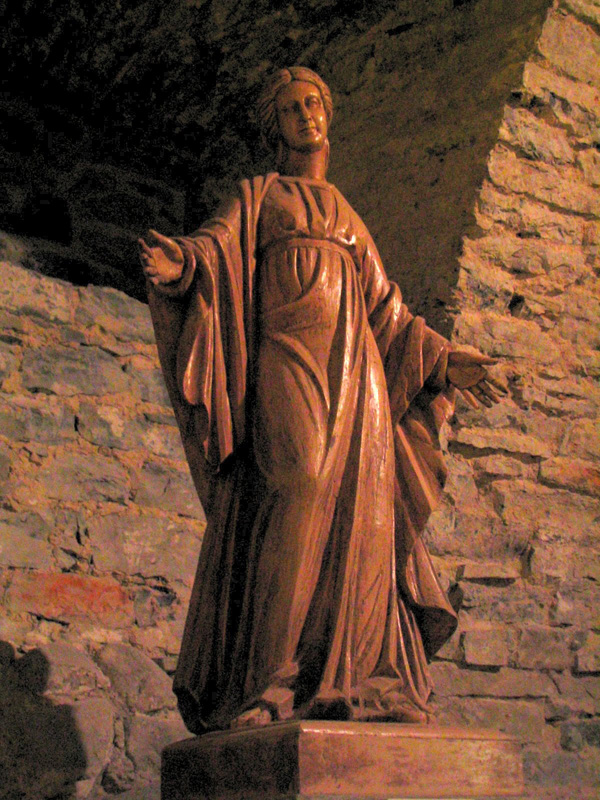 Simpson is hard-pressed to say whether Leonard Cohen’s song transformed the chapel’s symbolic value yet again. My zealous friends aside, the staff of the tourism office nearby swore up and down that they had never heard anyone bring up the chapel’s Cohen connection in the past few seasons. However, they cryptically added that “people who do know about the connection go.”

Simpson confirmed that Cohen acolytes periodically make pilgrimage to the museum, and tour guides will occasionally share the connection with groups. She added that the chapel remains a place for “pilgrimages of various kinds…it speaks to many different traditions. Everybody is looking for a meaning in life, and a lot of them come here.”

I found what I was looking for – a chance to learn about the lady. From the chapel’s tower I saw her arms stretched over me, benevolent. The lilting strains of “Suzanne” that echoed in my head sounded oceanic. The view of the waterfront was nice, too.