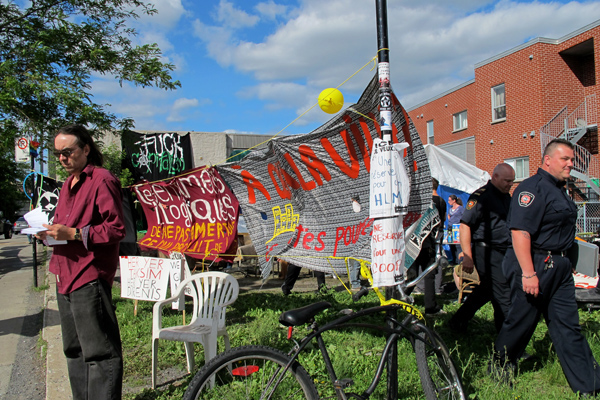 Since June 1st, social housing activists have been squatting an empty lot on the corner of St-Philippe and Notre-Dame in St-Henri. The movement, which goes by the name “À qui la ville,” and is associated with tenants’ rights group POPIR, wants the city to acquire empty lots and buildings in order to build more social and affordable housing.

When I happened by the squat this afternoon, a dozen or so people were lounging out on couches, snacking in the temporary kitchen, painting banners, handing out flyers to passers’ by, and tossing the ball for a dog. I was told that about 25 people had spent the night. While I was on the site, a trio of firemen came by and politely asked to inspect the site, looking for any dangers or infractions. The barbecue, camping stove, and the structures made of tarps and 2x4s all passed inspection; the savvy squatters even had a fire extinguisher on hand.

I was told that the police have been also checking on the squatters regularly, but so far have not been able to find grounds to evict them. Peter Sergakis, the land owner, has told the media that the squatters are welcome to camp out for the time being and to bring attention to their demands. But he has no intention of changing his plan to build market-price rental units on the St-Henri property. If the City wants to respond to the demands for affordable housing, he says, they are welcome to subsidize his private rental units.

Sergakis made the news last year for starting a crusade against the presence of homeless people in downtown Montreal.

To my knowledge there is no official policy on squatters’ rights in Montreal. 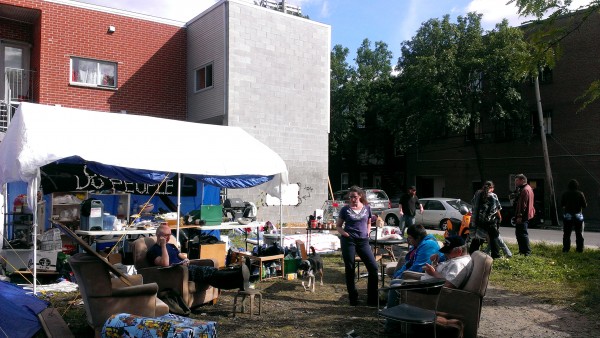