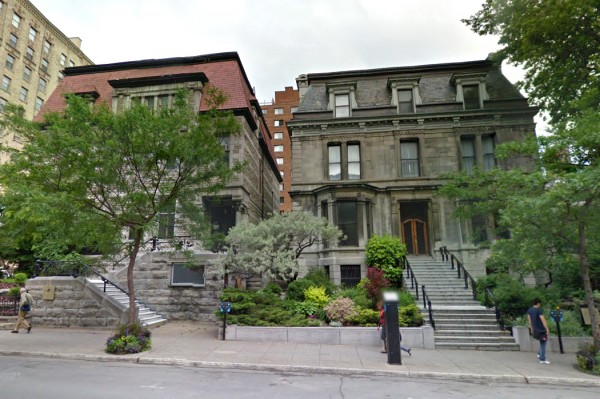 This article is contributed by Eliot Perrin, who performs archival work for the Macdonald Stewart Foundation here in Montreal.

How does a city re-purpose historic mansions that no longer serve as single-family dwellings?

Perusing the architecture section of The Globe and Mail, I came across an article about the restoration of an 1865 Italianate mansion in Brantford, Ontario. While serving as the headquarters of the Canadian Legion the house had, over the years, undergone a serious of unfortunate renovations using materials ill-suited for a building of such craftsmanship. While such occurrences are commonplace for heritage structures, what caught my eye was a parenthesis added by the author:

“of course it should be noted that without service clubs, religious orders or universities, most of these grand mansions wouldn’t have survived into the 21st century at all.”

I had often cursed the lamentable renovations to heritage buildings, but this article led me to consider that without the vocation that these groups could provide, many of these remaining buildings would have undoubtedly faced the wrecking ball.

While constructed to serve as single-family dwellings, these mansions often ceased in their function following the original family’s divestment of the property.  However, selling these properties is far from straightforward as they are far too expensive for most buyers and their internal layout makes it difficult to reconstitute a structure without dismantling most of its cherished features.  It was private and public community groups who could effectively use these mansion’s rooms for their associated activities. Hence, the dining rooms, parlours and conservatories of the wealthy became the banquet rooms and meeting spaces for private clubs, social groups and university faculty.

A number of examples of exist throughout Montreal show how these private owners and community groups struggle to balance the heritage qualities of their building with the modern needs of a functioning organization.  The building in which I work, the Forget House on Sherbrooke, was constructed in 1884 for Louis-Joseph Forget, a wealthy French Canadian who worked for the Stock Exchange and CP before becoming a Senator. The house was sold by his descendants to the United Services Club, which owned building until 1975 when it was purchased by the Macdonald Stewart Foundation who restored the layout and interior details of the structure.

The Reid Wilson House next door, however, was not so fortunate: it has remained vacant for well over a year now after Vins Philippe Dandurand Inc. relocated to Greene Avenue. Cost, commercial zoning and the unique requirements of a heritage structure all contribute to its present happenstance.

The Mount Stephen Club closed in 2011, leaving the George Stephen House to be incorporated into a boutique hotel complex. Time will be the judge on this project’s ability to properly preserve and highlight this important home. The Notman House and St. Margaret’s Home, currently being renovated for the purposes of housing emerging web and technology-based engineers, is a welcome sign of the re-purposing of important heritage structures without comprising the scale of their site. As these historic mansions change ownership and vocation, monitoring their development is vital for their ongoing preservation.