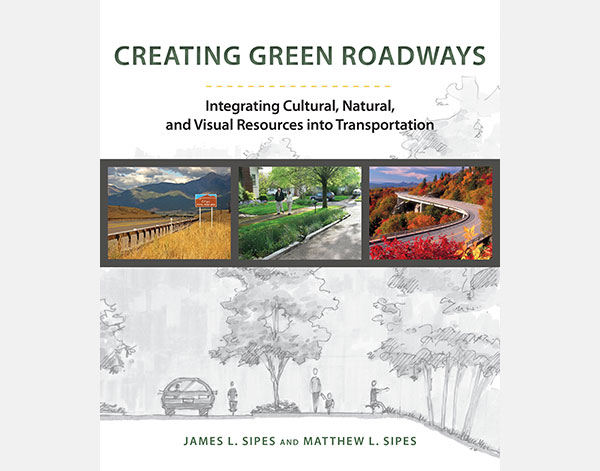 Author: James L. Sipes, Matthew L. Sipes (Island Press, 2012)
When presented with anything marketed as “green” it is easy to glaze over, having grown accustomed to so much ‘green washing’ in every aspect of our lives.  Similarly, upon hearing the term “green roadway” an image of a large bicycle lane, pedestrians masses everywhere and buses often comes to mind.
While you wouldn’t be wrong if this were the case, there is much more to consider when talking about the latter. And although Creating Green Roadways: Integrating, Cultural Natural and Visual Resources into Transportation does consider these common preconceptions, the bulk of the book discusses other practical methods for improving the design of North American roadways—combining thoughts on cultural, environmental, visual aesthetic and safety needs.

Written by James L. Sipes—a landscape architect and environmental planner—and Mathew L. Sipes—a civil engineer—the book benefits from both authors professional experience as it brings together the disciplines of architecture, planning and engineering—all of which are indispensible when creating roadways—and presents them as a single integrated perspective. This approach makes the book more accessible without skimping on technical details.

It is worth noting that Creating Green Roadways focuses on creating better roadways in the United States and covers everything you might encounter while designing a road south of the border.  As anyone who has driven on both sides of the Canadian – American border can tell you, the two countries have traditionally had different approaches to road-building (Americans being much more keen on freeways), but this does not make any of the lessons less valid. That being said, if one is already actively involved in road building in Canada, some of the practices described surrounding environmental protection and routing may not sound that revolutionary.

The book begins by describing the main problem that currently faces transportation planners—more specifically, that the 50 years of post-war boom has resulted in sprawling suburbs, decentralized city centres, and a ton of expensive, decaying infrastructure. They describe how experts have emphasized that land use planning and transportation planning must go hand-in-hand, in the past, and that this is an essential first step in creating better roadways.  This problem is often seen as a supply and demand gamble that ends up as a stand off between land developers and road builders. From the transport side, it makes no sense to build out to a location with no demand, and from the land use perspective, it doesn’t make sense to build somewhere without the capacity to get people there.
One of the main themes of Creating Green Roadways is de-emphasizing roads in urban areas and thinking about them as places other than just circulation routes for automobiles.  Roads are so expensive to build and maintain that it is more important than ever to make the most of these investments.
The authors argue that the ideal roadway has plenty of room dedicated to bicycles, pedestrians, transit and green space.  This ties in with lands use planning because if communities are planned to be denser and pedestrian oriented, then fewer roads will be needed.  This approach reduces costs and fosters the growth of healthier communities, overall.
Traditionally, roads have been planned according to engineering mindsets that dictate speed, efficiency and direct routing over community and environmental resources.  Part of building a green roadway, Sipes and Sipes state, is ensuring that it will be relevant to its cultural and environmental surroundings.  This means more public consultation may be required, and surprisingly that the latter may be more even more important when discussing rural roads.
In a rural environments distances are longer, and different factors come into play.  While cycling and transit are still important, the demand for such facilities is much less.  However, the demand for better environmental mediation may be higher.  Moreover, in rural areas, building green roadways means building around landscapes rather than through them.  This is a subtle distinction, but it is paramount. With this approach, roads become more footprint conscious and contain more features to allow for the uninterrupted flow of wildlife and natural hydrology.

Along highways and within certain rural settings, some of the more ‘glamorous’ ideas on greening roadways can be implemented.  Major roads move along right-of-ways that encompass vast (albeit narrow) stretches of land.  Creating Green Roadways outlines numerous case studies where right-of-ways along highways have been used to grow biofuel, harvest solar energy or create passive storm water management gardens.  These kinds of features provide increased economic value as well as  environmental sensitivity.

In all Creating Green Roadways is an important collection of resources for creating more responsible infrastructure in both rural and urban settings.  The numerous case studies outlined within, detail how the concepts discussed can and are being implemented with great success.
The task of creating a more sustainable transportation future is still daunting and will require vast retrofits to existing infrastructure.  Creating Green Roadways is a good resource for anyone involved or interested in the transportation industry looking to work towards more responsible infrastructure.
***
Andrew Cuthbert works as a GIS Analyst working in environmental consulting. His interest in transportation and environmental planning led to his involvment with Spacing Magazine and his continuing education. When not working Andrew can most likely be found on his bike taking in the sights and fresh air.