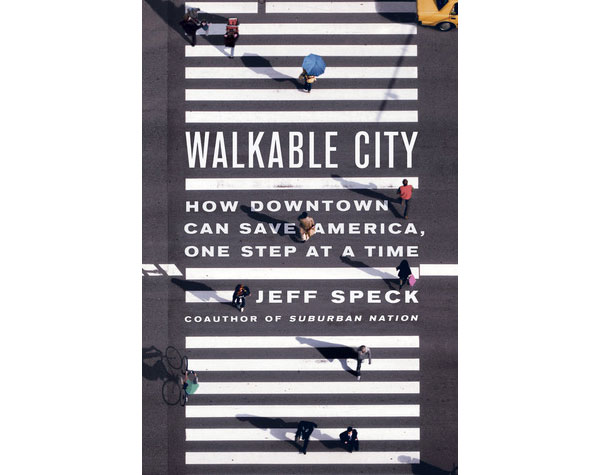 It is official: I have become that pestering individual who sees the opportunity to stay away from automobile use at every turn now, and it is completely thanks to Jeff Speck and his book Walkable City: How Downtown Can Save America, One Step at a Time.

I find myself sitting around a table of friends and loved ones, quoting little anecdotal points of information from Speck’s tome in what I feel is the same way he delivered said information in the book: witty, full of character and intrigue, factual and scientific, with enough speed of transition that the reader is fully immersed without feeling lost. Yes, Mr. Speck has made a walker out of me, but let me lay it all out for you, so you too will hopefully enjoy the read as much as I did.

One aspect worth noting is the accessibility of Walkable City. It is presented and bound in a standard size hardcover book, easy to carry, easy to store in a bag or purse, and the entire philosophy of the content follows suit. The overarching message of the book, to paraphrase Speck, is that walkability is not meant to completely replace the car, but instead allow us as individuals to return the car to its rightful place as an almost “last resort.”

Another great feature is that the chapters are never lengthy. Instead, Speck focuses on his specific points and relates them to real world issues, which allows the reader to fully understand the topic from a “life” perspective, rather than an academic one.

The contents are broken up in a straightforward fashion insofar that there are two main sections after a brief prologue—and Why Walkability and The Ten Steps of Walkability—which then leads to (as you guessed it!) a chapter by chapter breakdown of Speck’s ten steps.

The ten steps are broken down into four walk ‘types’ which, in a very unpretentious way, increase the reasoning power behind his obvious countless hours of work putting together the book. The first—The Useful Walk— focuses on car travel and “putting cars in their place,” while also seamlessly moving into mixing use on roads and allowing transit to function properly.

He then moves into The Safe Walk which concentrates heavily on how to protect pedestrians on roads and how to integrate bikes. While Speck touched on other aspects of safety, one thing I was interested in that was not fully addressed, was the idea of safety from crime or dangerous neighborhoods. He did reference it briefly, but I felt it could have been discussed more as it relates to walkability.  But, to be fair, it may not have fit into his steps, and he moved fluidly through the topic without it hindering the validity of the steps.

The third section focuses on The Comfortable Walk where he turns his attention designing the “shape the spaces” and considers the planting of trees and their significant impact on walkability. I found this area fascinating, as he pulled statistics in at what felt the most random of times that backed up his claims. For example, the simple idea that intersections and streets which feel unsafe (i.e. no stop lights, no lines on the road, no visibility etc.) actually reduce traffic accidents was such a seemingly no-brain conclusion. Yet, it was something I had never stopped to think about. And Speck never just gives a fact in Walkable City, he follows them up with a rapid fire slew of studies done all around the world, including some from right here in Vancouver.

The final section looks at The Interesting Walk and it rounds out the book by talking again about the design, as well as the increasingly noted fact that the integration of design teams (design teams, including all disciplines, working together from the inception of a project) yield far stronger walkable neighborhoods. He closes the section by advising readers to “pick your winners,” which in short-verse means to be mindful of the local context, considering carefully which steps are applicable to their particular city. Not all will work equally well.

We are a nomadic culture by nature, as Speck points out, and we have already moved across continents to form cities which have evolved to be un-walkable. But as we develop further, walkability may just have the power to save us from some of the other factors which we attribute to growing global concerns. The book is riddled with ways that people can change and Speck does not discriminate from the top-down, calling out everyone from the individual to the leaders of respective fields.

He cites funny scenarios, like an office that was originally located in the center of a metropolis, but moved further out to build a LEED Gold building with the idea thatthey would be more sustainable. After everything had been accounted, however (i.e. the new travel time for the employees, carbon footprint for supplies etc.) the new building was actually less efficient than the first…..yet it attained LEED Gold. This is how Speck gets his point across: a simple story that humanizes some of the pitfalls or successes we have seen in humanity, followed up by factual data which solidifies his point.

That being said, Speck rarely goes on the attack of something without having a strong example of how a situation could be reoriented to a positive outcome. There is nothing worse than someone who will argue you to no end, yet never comes up with a view of their own, and Speck is not (thankfully) one of these individuals. Speck tears you apart but gives you the proper tools to successfully fix the issue, in return.

I will leave you with a quote from the book that hit home for me:

LEED Architecture without good urban design is like cutting down the rainforest using hybrid-powered bulldozers.

I finish off to demonstrate how Speck manages to get people seeing his point of view—and speaks to the problems facing us today at a number of scales—in a way that comprehensively moves across many scales in an engaging and accessible way. Rarely does he limit his field of view to a strong bias and this ultimately makes his claims that much more influential.

I have recommended this book to everyone from my fiancé to a marketer, from my mother and a customer service guru, to friends who already walk as much as possible. I will continue to recommend this book to anyone who will listen to me banter on about it for an hour, because I feel that the information presented within can and will change the way individuals look at walking in their cities.  And for once, I learned all of this from a human perspective, without impending doom staring me in the face.

Ultimately, Walkable City: How Downtown Can Save America, One Step at a Time is a lighthearted, whimsical, but exhaustingly factual book which should be handed out to every household as a government incentive to live a more sustainable lifestyle.