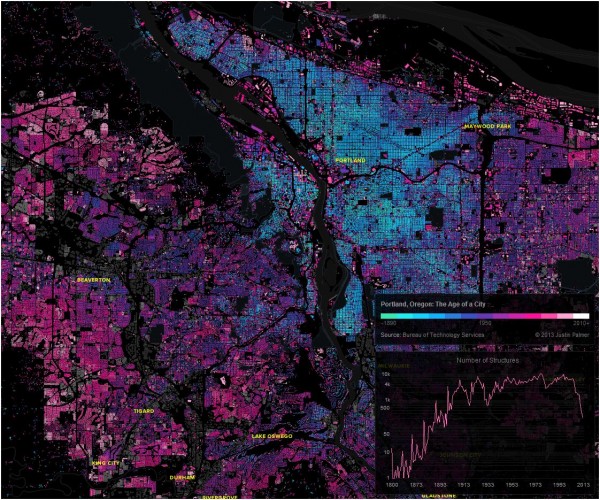 A brilliant map created by Portland resident, Justin Palmer, shows the colour-coded ages of 544,033 buildings in the Portland metro area of Oregon.

The project, titled “The  Age of a City” draws its information from a publicly available dataset that pairs building locations with the construction dates. TileMill was then used to add colour to the map: the aquamarine hues show buildings built in the 1890s and onwards, purple shows buildings from the 1950s, and pinks are used to show buildings built from the 1970s while white represents the most recent years.

The creator points to some clear patterns that can now be easily observed; some are not too shocking but still fun to see mapped, while others reveal old trends in the city’s evolution and spark some interesting questions:

How can Canadian cities map their data to reveal similar trends? How can these visual mapping tools be used to plan for the future?

Via Architizer and The Atlantic Cities