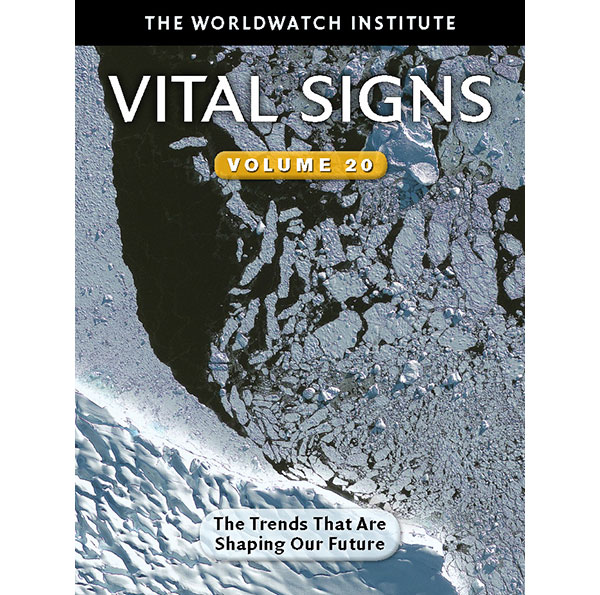 The threat of terror is around every corner in 21st century life, or so it would so frequently seem. As I pried open the pages of The Worldwatch Institute’s Vital Signs: Volume 20, I was nervous that I would need to be medicated while reading through its pages, rife with what I could only assume would be the most terrifying facts I’d never want to know. It didn’t fail to disappoint in this regard, but where I was pleasantly surprised was how enthralled I was in the content.

The book read like a “Farmer’s Almanac” of world events, many of which we hear about every day in the form of lax newspaper journalism. Vital Signs, on the other hand, delivers a headline, and then sticks to the facts no matter how droll or terrifying. There is some artistic license within some of the different author’s styles, but not much. On the whole, it reads like an account of statistical events, meant to serve as a guide for other endeavours; a handbook for the evolving human.

Within its pages were topics one would expect, such as global warming, sea levels rising, global water shortages and an increase in natural disasters.  However, many sections were new and informative. Learning about the auto industry, for example, makes one understand and connect seemingly diverse issues such as commerce and the economy, subsidies for gas giants and advertising, pharmaceutical companies, as well as the agriculture world and it’s constantly changing face.

With this in mind, Vital Signs does an excellent job of linking elements which may seem completely irrelevant to each another,  having more of an impact than one could originally imagine. Drawing links between how advertising budgets are directly related to diseases we are susceptible to from eating animals pumped full of antibiotics as a result from the US allowing direct-to-consumer advertising from pharmaceutical companies is not an idea one would pick up on a street corner, or in a copy of your local newspaper, for example.

These connections don’t always make sense at first, but as Vital Signs breaks them down and relates these topics, one gets a clearer picture of how advertising and pharmaceutical companies support large-scale agriculture advances (to stick with the current train of thought). These lines that tie the world together are surreptitiously hidden just beyond our field of view, but Vital Signs does an amazing job of bringing everything into focus.

Also noteworthy is that while this is not the feel good bestseller of the year, there are glimmers of connections that can be made where people doing good in the world stand out. Vital Signs does just as good a job at highlighting  the many positives hidden amongst the negatives. Female farmers getting more of a say in international markets, economies returning to healthier states, smarter fishing and aquaculture advances, as well as more investments in smart grid systems and renewable energy, just to name a few.

It is clear the world outlook can be unsettlingly dark and dreary at this point in history, and a purely factual book would only seem likely to prey on this belief and make life seem that much more dismal, or flip to the opposite and skew the facts to sweep the world’s problems under the rug. Vital Signs did neither. It spoke clearly and rationally with some emotional flair, but delivered what it intended to deliver: facts about our world and it’s development, in an unbiased and veritable layout.

As such, it is well worth a read, at this time, in particular……as we all reflect on the year that has just past and chart a course for the year ahead.