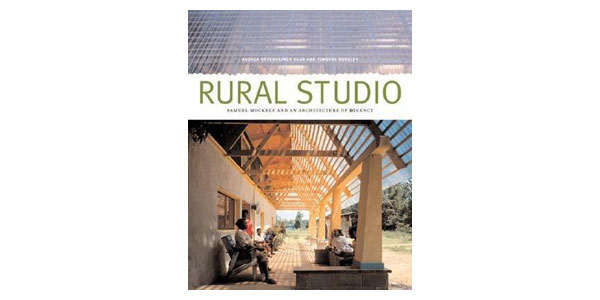 In his 1952 novel East of Eden, John Steinbeck took on an argument for the inherent struggle of man to do good over evil. One of my top three favorite quotes from the book sums this all up quite neatly:

I believe that there is one story in the world, and only one. . . . Humans are caught—in their lives, in their thoughts, in their hungers and ambitions, in their avarice and cruelty, and in their kindness and generosity too—in a net of good and evil. . . . There is no other story. A man, after he has brushed off the dust and chips of his life, will have left only the hard, clean questions: Was it good or was it evil? Have I done well—or ill?

East of Eden takes place in the rural areas of the United States, around the turn of the century or just thereafter, as boys are going off to war, and the car is still a novel idea waiting to catch on.

Where East of Eden is a philosophical, fictional look at good versus evil, I find parallels to the work of Rural Studio: Samuel Mockbee and an Architecture of Decency, for it is within these pages, that we find acts or architecture performed in tune with finding simple and honest acts of good, where there seems to be only evil. In a place where materials are scarce, and money is even scarcer, the late Samuel Mockbee revolutionized the idea of giving back.

What inspired me about what Mockbee did with Auburn University’s Rural Studio was to take places that would be considered ‘foreign lands’ to the majority of people in the middle class, and humanize them in a humble way through architecture. Rural Studio began as an idea on how the architecture students of Auburn could give back to society in meaningful way while developing a collaborative, realistic classroom experience for students in their second or fifth years.

Whether coming out to help or joining for their Thesis, students who were selected each year to participate would join Samuel Mockbee and live near their chosen site for the entire semester, literally living and breathing the project. Each project starts by interviewing individuals who needed new housing, and then selecting the client they felt most deserving (or in most dire need) of a new home. They frequently talked about how this was not an easy choice, and I could empathize. Interestingly, some of the eventual clients were adamant about denying the help offered, feeling that they didn’t need charity, showing the students their pride in their homes, no matter the stigma attached.

The book is broken up very simply by project, with short briefs on the program, the client and the process that went into putting the final building together. These short write-ups are succinct and crafted with precision so as to give the reader the amount of information needed, while letting Hursley’s stunning photography do the rest of the talking. Never once did I find myself distracted by the Dean’s writing.  Its honesty and integrity complemented the projects extremely well.

The only possible criticism of this wonderful book is that some of the students seemed to speak about their clients in a way that condoned the standardized image of poverty. That is, it seemed like they believed they were ‘saving’ these people from their unfortunate and unhappy lives, when this was not necessarily the case. For example, the Newbern Baseball Field Project (2001) was definitely in need of repair originally, but the conditions did not seem to inform a sense of unhappiness in its users. While its community members would arguably be happier by a new design that could give them a sense of pride in the place where they lived, these people seemed to find joy in community first and foremost, not necessarily the condition of the built world around them. They lived modestly, and while economically speaking they were not overflowing with ‘stuff’, they were happy on their land with the lives they had carved out for themselves.

This is less a critique on the book itself, than perhaps on human nature. Even within this context, it is a small one because at the end of the day, good was being done. While there certainly are questions of the lasting effects on individuals, and the philosophical debates about status that could (and probably have been) waged over this topic, the only aspect that ultimately matters is that the projects in Rural Studio: Samuel Mockbee and an Architecture of Decency were motivated by a genuine sense of morality and sought to change people’s lives for the better through the built environment. Something far too rare in this day and age—highlighting the importance of this book despite being over a decade old.

John Steinbeck has another beautiful line from the dedication of East of Eden that will stay with me forever—like the works showcased in Rural Studio. It is a reminder of why we designers do what we do and what seemed to me to be an underlying current in the Mockbee’s wonderful initiative:

…the pleasure of design and some despair and the indescribable joy of creation.