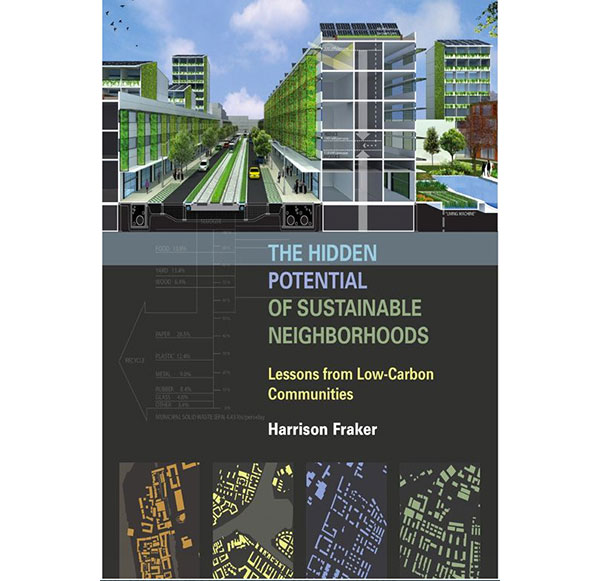 The Hidden Potential of Sustainable Neighborhoods: Lessons from Low-Carbon Communities is a handbook of sorts which focuses on sustainable urban design case studies, based mostly in Europe. In the introduction, Harrison Fraker admits that in our “media-saturated culture it can be argued that, until recently, the threat of climate change seems to have been overexposed. People have been numbed by the repetition of potential threats that seem complex, distant, and hard to personalize.”

While this is not a new statement, Fraker doesn’t just leave this hanging in the air, but instead uses the book as a vessel to speak to these issues, and how urban design can make a relevant impact. He stresses that many of these changes are elements out in the open, which do not need to be hidden behind the guise of “green” technology.

The book has eight chapters, beginning with the introduction and moving through four sustainable neighborhood case studies. These neighborhoods are not laid out in any specific order, allowing the reader to digest the pros and cons of each community on their own within the controlled environment of a single chapter. This format strengthens each piece as a whole and allows for comparisons across complete chapters. The communities, as well as the chapter titles, are:

Within each chapter/case study, Fracker critically analyses many of the complex aspects that went into their creation – from the original concept and planning and process behind certain developments, to the architectural/landscape considerations and green systems implemented with a noted importance on their efficacy. Every single aspect is reviewed in detail, both positive and negative, ensuring that readers are given quite a comprehensive understanding of each city.

For instance, Fraker describes how B001 did not meet its energy goals due to the fact that its final development design oriented its buildings for views instead of the initial plan of orienting for optimal passive heating and cooling. These numbers are then reflected in a graph showing the estimated and observed amounts of energy used, as broken down into electrical energy, heat energy and so on.

Some of the most interesting elements of the book are the descriptions of different systems that deals with waste and sewage. It was particularly interesting to read about those used in Europe, knowing that in our own backyard similar strategies have been implemented (i.e. Olympic Village, False Creek, Vancouver) or are being considered. This was a strong indication to me that while everything looks good in Germany and Sweden, there are various local precedents.

Three more chapters follow those above. Observations across Neighborhoods, is a concise and comparative summary of the case studies, themselves . This is followed be A Road Map for the United States and Beyond, where these ideas are then presented as a tool to begin the process of bringing methods to cities in the US ,where sprawl is significantly worse than in Europe or Canada. This section is crucial as it meticulously crafts fictitious scenarios where the implementations in place abroad could be successfully integrated into North American culture.

The book ends with a Conclusion which doesn’t simply sum up the multiple facets of the book, but instead speaks to the methods used, the creative implementation possible in North America, and how that could actually be achieved – whether you are a planner, a city official, a designer, or just a simple citizen. These steps are not overbearing, and there is never a feeling of impending doom within the pages. The book breeds hope and prosperity in that there is tangible proof we do not need to give up the lives we have become accustomed to in order to treat our planet better. There will be sacrifices, of course, but they are far less detrimental than the opposing choices we could make.

An aspect I found particularly interesting about the book was Fraker’s criticism of the way LEED-ND (Leadership in Energy and Environmental Design for Neighborhood Development) rated these cities. For instance, he describes the fact that the cities lost points for walkable streets, street network, and tree-lined and shaded streets “because the point system is based on a traditional US model of streets with trees and parking…” This is not the first time LEED has come under fire, and it seems short-sighted that a city would lose points for being walkable, but some starting point is better than nothing, and organizations like the Living Building Challenge, are making sure that our buildings are performing better, and are pushing people to see past the status-quo.

The only (small) critique I had of the book was that the images used were not referenced enough. I was so wrapped up in the actual text that I found myself forgetting to look at the maps, charts, graphs, and city plans laid out in front of me – explaining in even greater detail the information I was receiving.

In all, the book was unfailing in its ability to map down to the finest detail the way these four cities operated, and process that information into relevancy for a North American context. While others are talking about this, The Hidden Potential For Sustainable Neighborhoods is the first book I have seen to break it down in such accessible detail.

For more information about the The Hidden Potential For Sustainable Neighborhoods, visit the Island Press website.