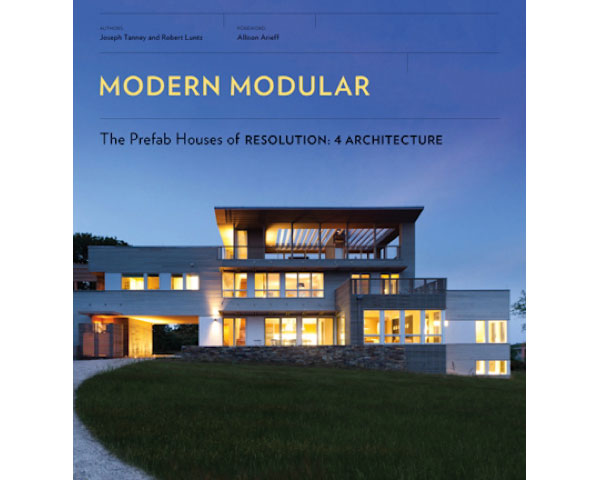 It would appear that I wasn’t the only one who frequently enjoyed building with LEGO as a child, as the team at RESOLUTION: 4 ARCHITECTURE have essentially built their livelihood on large scale versions of this very amazing toy. In saying that, I am not diminishing the incredible amount of work that was put into the designs featured in Modern Modular: the Prefab Houses of RESOLUTION: 4 ARCHITECTURE. Instead, the comparison is meant to draw parallels between the precision that goes into a LEGO structure and that evident in the RESOLUTION: 4 designs. Throughout the book the reader is welcomed into the homes a number of clients and we can truly appreciate the fact that prefabricated houses may be on the upswing.

The book begins with an introduction by Allison Arieff as she talks about her discovery of RESOLUTION: 4 ARCHITECTURE during a contest for Dwell Magazine. What struck me here was the historical information behind prefab design. I had known that it was a popular ideal throughout Le Corbusier’s time, but I was unaware of how many times it had started and failed as a movement. Knowing this made the designs displayed throughout the rest of the book stand up with a different type of stature, as if they had endured, or found the cure to some ailment that was plaguing others as they tried similar forays into the world of prefabrication.

After this, we are taken through another quick introduction from the firm itself – diving into their philosophy and history, and the reasoning behind why they chose prefabricated design. Then comes the case studies, which are laid out fairly equally on each page, driving home their concept of prefabrication. Each page contains the “module” used in the top left corner – a small 3D axonometric drawing of which pieces were used. To the right of this is a written breakdown of the exact systems in place in that particular project.

The book works this way as the structure and form play well with the content – modernist homes in beautiful settings. It is an extremely thought-provoking and well-documented journey through their design methodology. Also, while each project is modular and prefabricated, they dissect those aspects that set each one apart, a little bit about the client, and if any sustainable considerations were made (of which there were a decent amount).

There were a number of thought-provoking aspects to the book, but I found the inherent tension between the intentions of the firm and the work they do the most curious. To be sure, the book sells the firm extremely well, and one cannot deny that they produce beautiful modernist work, regardless of prefabrication or modularity. Within their narrowed scope, they have been able to shine. But while these items are highly successful, one has to ask themselves, to what end? Clearly, modular, prefabrication homes lend themselves to people who cannot typically afford “good design” but need it: the architectural equivalent of IKEA giving common homeowners or renters good products to make a functional home, without spending thousands of dollars.

RESOLUTION: 4 ARCHITECTURE speaks to this themselves in their introduction: “With the introduction of Dwell in 2000, for the first time a magazine was completely devoted to modern domestic space, making modernism more accessible by shining a bright light on the lifestyles of regular people living in such spaces. Simultaneously, stores such as Design Within Reach, Target, and IKEA were making both high-end and everyday modern design accessible and often much more affordable than it had ever been before.”

For the homes within the book, however, it was clear that none of the clients were in a position where modular-for-affordability seemed necessary. The fact that these homes have smaller ecological impacts than other houses is fantastic, but when ninety percent of the owners are buying this as their second house, or vacation home, one cannot help but feel somewhat confused by the irony given that modular prefabrication has the great potential to help those those in serious need.

From disaster relief to the homeless and overcrowding in foreign cities, there is a strong demand for well-designed, functional, and sustainably sound prefabricated homes. And, admittedly, I found it hard to read about the solar panels heating someones pool in the middle of the Catskills when that same technology could be used to heat a water tank for a family caught in the wake of a natural disaster.

I am definitely sympathetic to the fact that not all design has to be about helping those less fortunate than others. But the irony of using a technology that has been historically used to help those in need (due to its speed of assembly, cost benefits, sustainability) in order to to give someone a summer home quicker and cheaper brings up a lot of questions related to the nature of the field of architecture. The paradox is well captured in the firm’s statement: “By becoming intimately involved with not only the design, but also the production of homes that are attainable by a larger segment of the population than has typically been able to employ an architect, we can have a much greater impact on our built environment and the role of our profession in shaping it.”

To be fair, the above criticism should be separated from the book itself. As a monograph, Modern Modular serves its purpose exceedingly well – showing the beautiful, meticulously crafted modular art of RESOLUTION: 4 ARCHITECTURE. It is definitely worth a look for those interested in seeing what is possible using this wonderful design and building process. In light of the great work within, one cannot wait to see how modular prefabrication will transform in the future towards benefiting those who need it most, and demonstrate how designers crafting the ideas and technologies will use them to better the world around them.