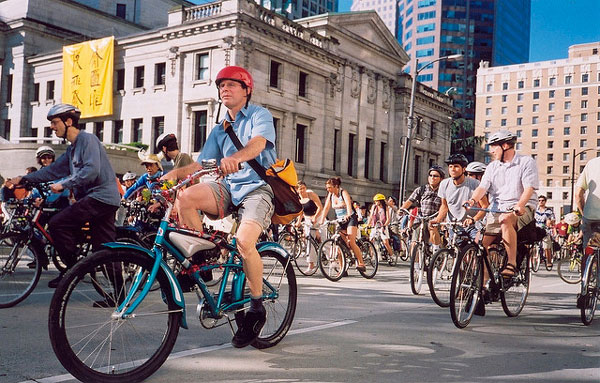 Bicyclists fill a street during a Critical Mass ride in Vancouver / Photo: David Pritchard via Flickr

When it comes to building a bike culture, we here in Canada often look upon the “live-work velodromes” of Amsterdam, Copenhagen, and the like with considerable envy. So well ingrained are the quirky intangibles that make up a vibrant bike culture that not even a Københavnere (resident of Copenhagen) would be able to tell you what makes it so – it just is.

While we may not be so fortunate as to have ultra flat cities laid out on quaint medieval templates, many dedicated individuals, professionals, and interest groups have succeeded at defying the common refrain that cycling “just won’t work here”. Indeed, cycling is on the rise in Canada’s cities.

And yet, rather than taking on board and supporting the multitude of social changes which have lead to this growth, the larger narrative surrounding the prospect of more urban cycling has largely been pigeonholed into a debate over “bike lanes” and other grudge matches over rights to public space.

That growing cities with the means to accommodate active mode shares should be exploring strategies to tap into latent demand for cycling is an idea that is gaining more and more traction in Canada. Undoubtedly, the business case for investing in active transportation is very compelling.

And, while many municipalities (such as Toronto, Vancouver, and Calgary, etc.) have succeeded in implementing designs to respond to growing cycling demands, they have largely done so through infrastructure based strategies alone (with a few exceptions).  Certainly, no municipality could ever hope to sustain a growth in cycle mode shares without providing an attractive, safe, and convenient means of travel for cyclists. However, limiting efforts to strictly infrastructure build-outs is to leave some very powerful tools on the shelf.

Of particular focus here is the rather marginal attention often given to “social engagement and promotions strategies” within Canada’s cities. In contract to “hard” infrastructure strategies, social strategies (also called “soft” strategies) are initiatives that are crafted around the engagement of individuals. They create the circumstances and provide the means for individuals to adopt new new behaviors – in this case, more cycling. These may include for example, mass media/marketing campaigns, personal travel packages, bike education programs, or cycling & cultural events.

The idea behind such strategies arose out of a breadth of research investigating the various barriers to, and motivators of, urban cycling. The results of such inquiries have constantly demonstrated that it takes more than the “build it and they will come” philosophy behind the purely physical infrastructure based strategies (such as bike lanes, or bike parking facilities) that often attract the most attention in our public discourse.

These social strategies help to provide the practical skills, logistical support, and the creative means of weaving cycling into everyday life that are often seen as the “building blocks of bike culture”.  Such strategies can take many forms. They may be municipally driven mass marketing campaigns which promote the benefits and convenience of public cycling infrastructure and services. Alternatively, they may be initiatives led by nonprofit organizations such cycling courses/bike education classes, bike to work/school campaigns, or bike rallies/events. Still yet, others might function as private enterprises such as bike taxis or cycle delivery services.

In addition to being effective ways to engender personal change and raise awareness, social strategies also provide a natural compliment to infrastructure programs (thereby increasing the economic viability/justification of these projects). What’s more, they also happen to be incredibly low cost, streamlined and cost effective – just the sort of strategies you would want to employ in times of fiscal prudence. The principal behind their cost effectiveness is very simple. Compared to infrastructure projects, social strategies can be run relatively inexpensively. Given their ability to habituate regular cycling behavior among large numbers of those who had never previously cycled, cost expenditures per “new cyclist” (for lack of a better term) are relatively low. Over the course of time, even the most infrequent cyclist would eventually recoup (and surpass) the balance of this cost owing to savings attributed to health benefits, congestion relief, pollution reduction, and other factors associated with cycling.

If we want to find the best examples of social strategies in action, we must again look to Europe. The vast breadth of literature and attention given to social strategies there is truly remarkable.  At their disposal are multilateral partnerships on mobility management, shared data bases, scholarly research, and multi-city collaborations (usually among Nordic cities). Taking this all on board, higher level governments and transportation ministries have proven themselves very willing to shell out substantial sums for social strategies aimed at increasing cycle mode shares. The results can be seen in the multitudes of cycling coalition and other nonprofit organizations partnered with municipalities to deliver robust and well funded social strategy platforms. Some good examples would be the platforms run by the cities of Copenhagen, Odense, Lund, Basel, Zurich, Goteborg, and many others.

Not to be completely outdone, many Canadian cities (such as Toronto, Vancouver, and Montreal) are hot on the trail and are busy with their own social outreach programs – although it’s safe to say they are in their nascent stages. While Canadian cities are in the beginnings of stirring up attention for social strategies, recognition and material support at the provincial level can sometimes be very hard to come by – a potentially debilitating obstacle for our municipality’s efforts to fund and implement meaningful campaigns. Looking across the country presents somewhat of a mixed bag.

Earlier this year, the Ontario Provincial government announced $25 million in funding over a three year period to help support Ontario’s Cycling Strategy – a plan put together by #CycleON that includes a secondary provision for social programs. At the same time however, the Province of B.C. only makes funding available for cycling infrastructure programs, and not for social strategies. Compared to the enthusiastic adoption of social strategies seen in Europe, our Provincial authorities remain either underwhelmed or entirely unconvinced. At its best, this mean that support for social strategies often come from the margins of funds dedicated towards cycling growth.

This unfortunate set of circumstances often leaves municipal level cycling coalitions (such as HUB in Vancouver or Cycle Toronto) in a tight spot.  As the European model has demonstrated, it is precisely these local nonprofit groups that play integral roles in partnering with municipalities to deliver various social strategy platforms. They often provide the hard to come by expertise, man-power, and cycle-specific resources that are indispensable in day-to-day operations. By not making the appropriate resources available to these groups, it undermines their ability to sustain and expand their services, and ultimately limits the range of social strategies available to municipalities looking to promote cycling.

To make things simple, a Københavnere might say that it is indeed cycling infrastructure that services and enables cycling demand. And, that the sight of thousands of daily riders, together with bikes parked around shops, schools, and workplaces, cements the bicycle as a fixture of our cities. However, it is the unique personal outreach provided by social engagement strategies that helps to create the new supply. Taken together, it is the actions of individuals, the facilities we build, and our changing personal outlooks that constitute Canada’s growing bike culture. As local interest groups, private individuals and municipalities continue to stoke this growth, we will inevitably rely on social strategies to play a more prominent role in the future. For this to happen, it is essential that they enjoy the recognition and support that they deserve.

George Poulos, EIT, MSCP. George is a transportation engineer-in-training as well as a recent Masters graduate of the School of Regional and Community Planning (SCARP) at UBC. He has previously worked for consulting engineers on a variety of transportation and municipal projects. Originally from Ontario, he currently lives in Vancouver.