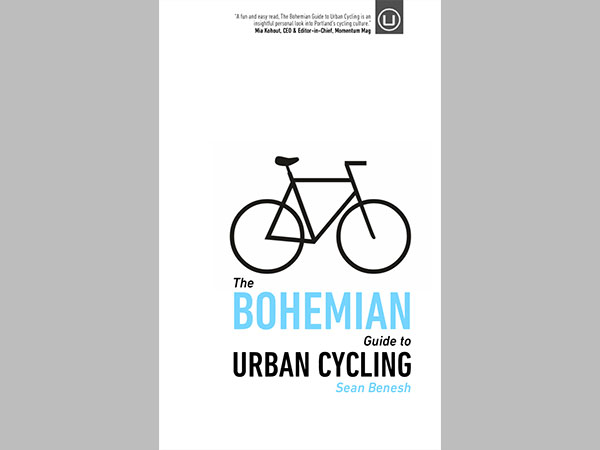 Urban cycling is not a new concept in many Canadian cities. It seems like at any particular point in time, there is a debate happening on bike-related issues. As one can imagine, there are people on all sides of the different arguments.

One of our cities – Vancouver – even came up quite a bit in Sean Benesh’s The Bohemian Guide to Urban Cycling. He lived in Burnaby before making his final landing in Portland, where he currently rides and resides, and where most of this book takes place. From start to finish the book was young, fresh, and witty, keeping the reader entertained and learning in a non-abrasive way. Benesh even apologizes when he first introduces foot-notes, wanting the book to feel less formal, and the message was received (the footnotes were not out of place). The book felt on the whole exactly how Benesh desired. He states, “I wanted to write a book based on these numerous conversations with people asking me about single speeds and fenders and the other peripheral issues that arise when talking about urban cycling. Not only that, but I wanted to treat seriously the context of where we ride … in the city. We are rooted in context, we don’t have the luxury of divorcing ourselves from geography.”

The Guide followed a very straightforward 12 Chapter structure, taking the reader through self-help sounding chapters such as, Rules of Engagement and Steeds of Choice and Those Who Ride Them into a more in-depth look at the urban environment as it pertains to cycling and mobility. These first chapters however, were fun and laced with bits of humorous asides that kept the book fresh and on pace throughout, and in no way made the reader feel like they were reading their average “how-to” style book.

The first eight chapters, speak to Benesh’s past, his time spent living in Phoenix and Tucson, Arizona, his job giving mountain bike tours through the desert, his move to Burnaby and relying solely on carless transportation, and then his final settlement in Portland. Although these pitstops seem random, they make perfect sense contextually and create a seamless flow across the book, as he ties his backstory and anecdotal information from his life into his teachings about bike riding.

He then hits the Awkward Transition chapter, and that it was, but again in the best way. It felt awkward, but simply because he noted the transition, it became fun and lighthearted when the topics to follow were anything but. Through this, he moves into chapters talking more from the background of the urban context and away from the M.A.M.I.L.’s (Middle Aged Men in Lycra).

With chapters Gentrify This! and Equity and Bicycling, the tone drastically changes and becomes more heavy. Speaking to issues around racism, discrimination and gentrification, Benesh also shares a secret he had “in his back pocket,” as he puts it. Without divulging too much, it served well to end the book and demonstrate that no matter one’s denomination, sexual orientation, or ethnicity, biking is universal. This leads to questions around how to make it appear more-so in the public eye, as well as the important discussion about making cycling safer in the urban environment. These are meant to elegantly start a dialogue.

Locally, we are lucky that we live in Canadian cities, where many can and do live car-free.  Yet, despite the fact that our urban cycling infrastructure seems to be constantly improving, what The Bohemian Guide to Urban Cycling does well to drive home is that we can have and deserve more. We can push for more riders, more awareness for the rules of the road, more respect on both ends of the spectrum (as a driver or as a rider), and that our job of awareness to bike-related travel is never complete. Ultimately, we can – and should – do more to try and get people out of their cars and onto bikes. It is a pertinent, critical message and I can confidently recommend the read to the casual bike rider through to the hardcore urbanist. You will not regret it.