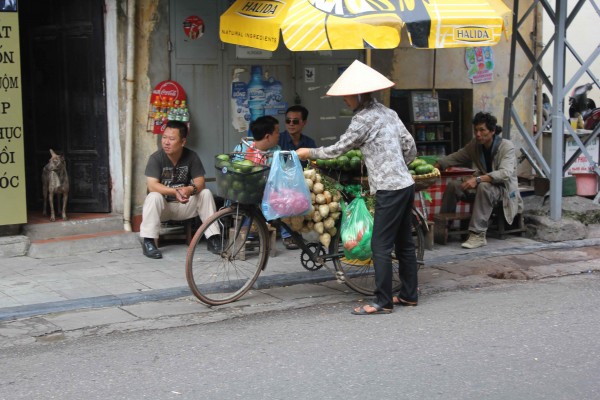 This post by Beth Savan is part of Spacing‘s partnership with the Toronto Cycling Think & Do Tank at the University of Toronto. Find out more about the think tank, and the series, here.

In this eye-popping city full of colour, movement and noises, we have been astonished by how women navigate the streets on heavily laden bikes surrounded by honking, swerving scooters. Hanoi is home to 7 million people and just as many motorized scooters and motorbikes, and they all weave dart and honk around the cyclists, everyone travelling in every direction in every part of the road. The cyclists are overwhelmingly adult females, and their bikes are mobile shops for inexpensive items of daily use. Has Hanoi figured out a way to reverse the usual gendered mode share that we see in the west, where most cyclists are men? It was only after spending a couple of weeks here, and appreciating the origins of the city form, that I began to understand the lives of the cycling mothers of Hanoi. Here, riding a bicycle is a necessary part of making a living.

This ancient city is built around “36 streets,” each devoted to commerce in a particular product. Craftsmen immigrated from specialist craft villages in the hinterland, bringing their skills, beliefs and rural allegiances to their new urban homes. The guilds based on these traditions and rural networks were manifest in narrow streets lined with dense rows of tiny shopfronts, devoted to a single product. I delighted in immersing myself in these vibrant neighbourhoods, where vendors spill onto the sidewalks with tiny stalls selling eyeglasses on glasses street, french fries in french fry alley, and silks on textile street. The rest of these lanes are lined with men’s shoes, jeans, stationary, Christmas decorations, backpacks, women’s fashion, down jackets, noodle soup, fresh meat, veggies, pottery, hardware, personal electronics, plumbing supplies, pots and pans, mattresses, towels, coffee, and almost everything else you can think of.

For each product, there is a spectrum of vendors, from the permanent shop fronts to the pop up stores, to the street and night market stalls (the latter requiring rent payment) to the mobile vendors, on bikes and some on foot with baskets hung from a bamboo shoulder pole. Mobile vendors sell the cheapest products with the lowest overhead (and least profits) and many of them are women. I learned that many of these women who cycle, largely poorly educated and with few marketable skills or capital to invest in more lucrative work, are the newest temporary migrants from the city’s rural hinterland. After early marriage and childbirth, the husband’s share of arable village land is often too small to support his new family, and so he stays home, farming and caring for the children, while their mother travels to the city to earn pennies a day to provide protein for her kids and pay for school fees. It’s a tough life, staying in crowded hostels housing 10 women per room, or enduring long daily commutes to and from the city. Rising in the early hours, these mothers buy their goods at the wholesale night market, cycling to their sales spots for the morning rush at 6am or earlier. They work until everything is sold, returning to their rooms at 4pm to 7pm, before a short nights sleep. Every couple of weeks, having earned 10 to 20 dollars, they return home to pass on this money and see their families. A life lived together as a family becomes a dream, the bicycle a yoke to drudgery and isolation. Not to mention the danger from congested streets and air laden with two stroke and dirty diesel exhaust. A scooter becomes aspirational for these separated families.

So for these women in Hanoi, bikes are not a vehicle of choice, as they are in many urban areas in northern Europe and North America but an unpleasant necessity. Gender participation in cycling is clearly culturally specific.