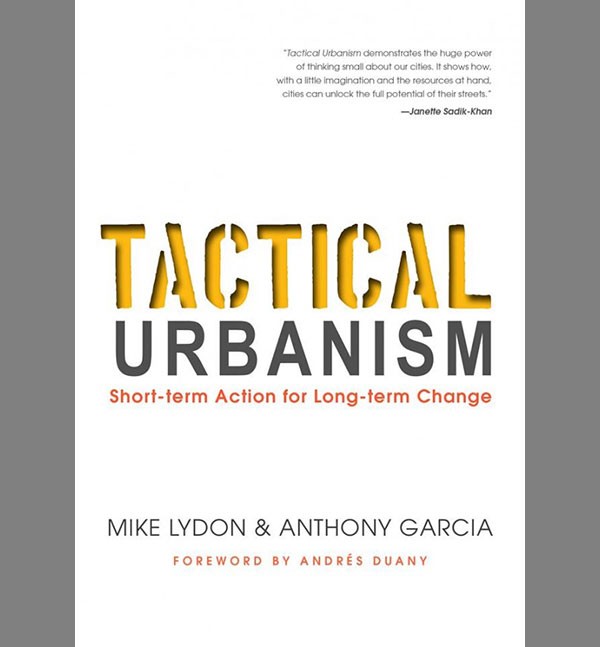 tac·ti·cal adjective \ˈtak-ti-kəl\: “of or relating to small-scale actions serving a larger purpose” or “adroit in planning or maneuvering to accomplish a purpose.” (Merriam-Webster)

For almost a decade now, Mike Lydon and Anthony Garcia have been deeply invested in making their communities better places to live. Improving the livability of our towns and cities is the goal of almost every urban planner. Many planners approach improving city design through formal neighbourhood processes. As co-founders of the Street Plans Collaborative, Mike and Tony have turned the concept of urban planning on it’s head and approach it from individual street-level interventions. This method is outlined in their recently published book, Tactical Urbanism.

In the foreword to the book, Andres Duany notes that Rem Koohaus and Bruce Mau’s 1997 urban design treatise S, M, L, XL was incomplete—it was missing the XS category. Tactical urbanism provides the extra-small counterweight to many of the extra-large urban redevelopment projects that have regained popularity in recent years.

The book begins with a concise history of the tactical urbanist movement, including some personal reflections by the authors on how they were originally inspired by the idea. But the book is meant to be a inspirational handbook more than a reflective history, so it quickly shifts gears and highlights some inspiring case studies from cities across North America. These examples include City Report in Portland, Oregon; Walk [Your City] in Raleigh, North Carolina; Build a Better Block: Oak Cliff in Dallas, Texas; and Park[ing] Day San Francisco, California. There is even a bit of Canadian content in the book, with a profile of some of the work done by Raise the Hammer in Hamilton, Ontario. Each of these examples of tactical urbanism provide inspiration for those of us looking for ways to make our neighbourhoods, communities, and cities better, more exciting, livable, and lovable.

Sometimes referred to as guerrilla urbanism, pop-up urbanism, DIY urbanism, or city repair, tactical urbanism is often misunderstood. It is used as a catchall term describing a wide spectrum of activities ranging from pub crawls to community chalkboards. While these can be fun and useful urban interventions, they are not tactical urbanism according to Lydon and Garcia. Instead, the book defines tactical urbanism as:

“an approach to neighborhood building and activation using short-term, low-cost and scalable interventions and policies”.

In other words, tactical urbanism is a methodology that allows people to implement emergent ideas to realize longer term neighbourhood-scale improvements. The goal is incremental and self-directed action towards increasing a community’s social capital and general livability.

Our cities are suffering because there is simply too much process and not enough doing. —Tactical Urbanism

Today, “hack” is now applied to almost any creative intervention that addresses a perceived shortcoming with the status quo, whether it be Ikea-hacking or life-hacking. Tactical Urbanism adds “city-hacking” to this list by echoing the culture of protest and DIY ingenuity seen in the hacking culture that gave rise to personal computing. The book highlights the tensions that arise when government regulations struggle to keep pace with changing trends and community preferences. In this regard, tactical urbanism is as much about current trends affecting city planning as it is about the relationship—and responsiveness—of a government to its residents.

Rather than being simply a critique of the status quo, the book celebrates urban innovation, in everything from ideas to implementation. Lydon and Garcia highlight how small legal infractions can be great opportunities to engage in a dialogue with project proponents—and opponents—about how the government can best address their concerns.

More than anything else, the book provides permission for engaged community members to become key actors in the transformation of their neighbourhoods. Here’s to hoping that it inspires a wave of innovative projects across Canada and around the world.

Yuri Artibise is a community engagement strategist with a passion for urban planning and public participation. Through his Yurbanism site, he explores the ‘Y’ of urbanism by sharing ways to make our cities more livable, community-oriented places one block at a time. He currently works with SFU Public Square, a signature initiative at Simon Fraser University designed to spark, nurture and restore community connections.