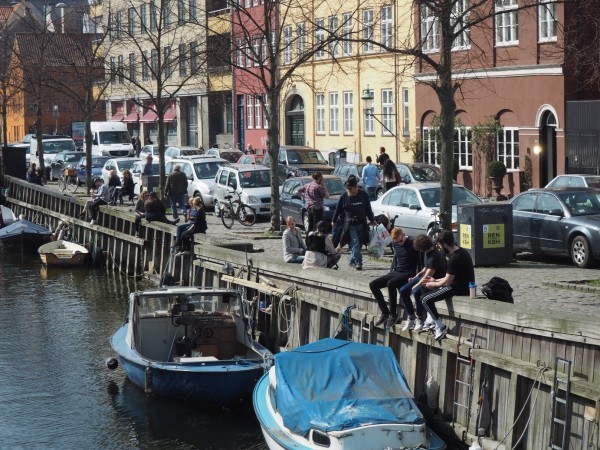 Copenhagen is often praised for its commitment to cycling and infrastructure. With 41% of all trips citywide done by cycling it is the Golden Standard Cycling City that many municipalities aspire to. Often times you will hear North American Urbanists singing its praises with statements like “…well in Copenhagen they do this”, “Did you know they time their traffic lights to optimize cycling flow?”, etc.

Having recently visited Copenhagen I was naturally impressed. Perhaps, what has impressed me more about the Danish capital is its commitment to building successful and inviting public spaces. Practically everywhere you look, you see Copenhageners spending time in public space, taking in the delights of their city. 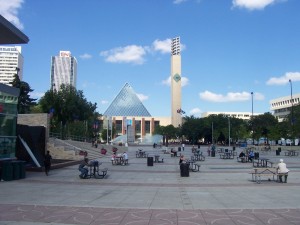 These spaces often look pretty, but fail to attract people to actually occupy them, especially because they are so large. When people do use these spaces, it is often because there is programming such as festivals, events or farmers markets. There are a few exceptions in North America like the Pioneer Courtyard Square and Director Park in Portland, or Bryant Park in New York City.

In Copenhagen, people are hanging out everywhere: on the sidewalk, on a bridge, the corner of The Lakes, the edge of a river, in the City Centre parks, the pedestrian only Stroget, the Super Kilen, and the conventional public plazas.

What is the key distinction that makes Danish places so successful? Why do Danish spaces attract so many people? A few key observations: 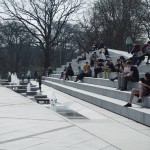 Steps in a public space.

The overarching factor that makes these spaces so people-friendly is that they are comfortable and quiet, thus inspiring people to stay on their own volition. The design emphasizes the size and scale of the human within the public space. They do not alienate people with grand or gargantuan and unpractical gestures. They do not make a person feel small or insignificant by virtue of the size and scale of the human. This human scaled approach to urban design invites a mix of different activities and has many diverse edges.

Public spaces do not have to be large. In North America, we often opt for a singular, large public space in our cities (because often only one of them exists). Smaller can actually be  better, as the space will seem fuller and more attractive when compared with larger spaces. Many of the informal spaces in Copenhagen were on the smaller side. In other cases, large spaces were oriented to seem like a collection of smaller spaces.

Offering a space for a few people to stay is better than none at all. The key is to engage people and invite them to use these spaces. Often in North America, people will be discouraged from hanging out in these spaces because it is often associated with loitering, panhandling or the consumption of elicit substances. 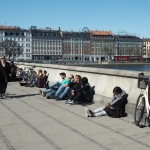 A Bridge is a Popular Hangout – Dronning Louises Bro

Many of the more, unconventional and informal spaces in Copenhagen were occupied since they were noticeably quieter. For example, the sidewalks were full of people on the Dronning Louise’s Bro, a bridge spanning over the Lakes in Copenhagen. This is only been possible because of the low vehicular traffic volumes it currently has. While the bridge sees several thousands of people cycling and the occasional bus crossing everyday, its sense of place isn’t eroded by the extraneous noises of high volumes of fast moving automobile traffic. 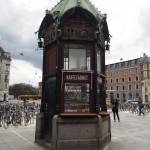 A small food kiosk in the Central City.

Almost all of these spaces are anchored by some form of restaurant or Café. People need to eat and drink, and having an anchor, no matter how small or large that serves food, invites people and suggests that they are welcome to stay.

3. Offer Places For People To Sit – Whether Formal or Informal 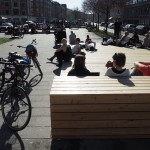 All of these public spaces also have seating; whether informal like the steps of a staircase, or the rim of a planter or actual street furniture like benches and chairs. People like to sit. If you provide seating in a comfortable space along edges and there is something to watch (like other people), people will use them.

4. Allow People To Relieve Themselves 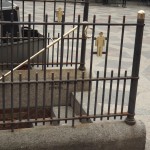 Often neglected in designing public spaces in North America is the bathroom. This usually means people must go to a nearby restaurant or café and spend money to use the bathroom. The Danish make no fuss about public spaces having free public washrooms. People are human, and if you treat them with respect by acknowledging their need to relieve themselves, they will feel welcome and will more likely choose to spend more time in a space. 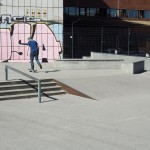 Often skateboarding is prohibited in public spaces in Canada.

None of these spaces had signs telling people what they couldn’t do. Spaces will never work properly if you create them, only to put up a sign listing 10 to 20 rules of prohibited actions. Public spaces need people in them to be successful. Spaces full of people have a sort of self-regulation about them. Creating spaces that invite people and letting them figure out how to use them, demonstrates a striking lack of patronizing oversight. It tells people ‘we trust you’ and we want you to use our spaces. This lack of paternalism is inviting – as a consequence, people use the spaces and seldom misbehave.

6. Give People Things To Do 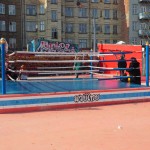 A wrestling ring in the Super Kilen.

On top of this the Copenhagen spaces also invited the more “rebellious” activities such as skateboarding.

7. Don’t Be Afraid To Be Eccentric or Bold 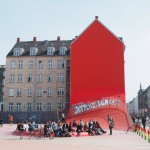 One part of the Super Kilen.

The Super Kilen is one of the most incredible spaces I have seen, it was an inspiration with its outlandish colours and details. Cities should not be afraid to be bold when designing public spaces. Something as simple as a coat of paint can radically change the aesthetics of a space.

8. Be Good To People 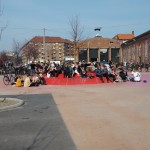 A simple and inexpensive concrete curb allows people to sit.

If you don’t think this can be done in your hometown, let me leave you with this. Jan Gehl is one of the key actors in the humanizing of Copenhagen – spending over 50 years of his life studying public life. Gehl is often quoted saying that 40 years ago the people of Copenhagen also said that they would never hang outside, they cried “but we are not Italians”. Strategic and thoughtful designs can engage and invite people in a relatively inexpensive way.

Another quote from Gehl, “It is so cheap to be sweet to people.” And it pays off in spades, as a result of a few inexpensive details, people stay outside and make the public spaces attractive. As a result of more people being outside, safety is improved with more “eyes on the street.” Great public spaces will also generate spin-off activities, where people are more likely to support adjacent businesses. 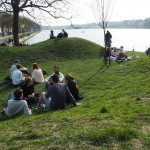 People relaxing in the park.

A public space full of people will inevitably attract other people. Perhaps, the most remarkable thing about humans is that we are happiest when we are around other humans.