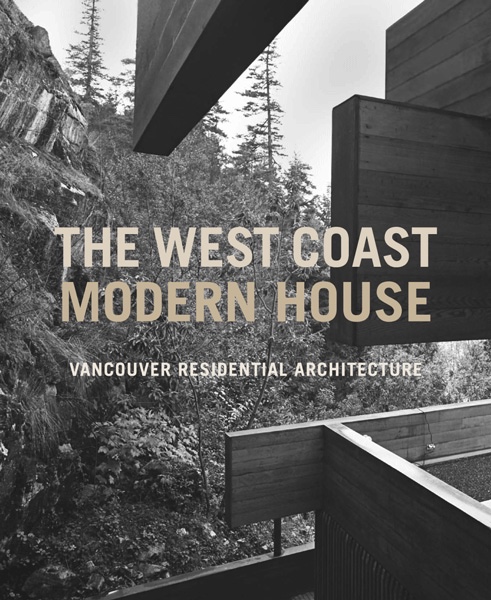 The West Coast Modern House chronicles the development of mid-century modern Vancouver residential architecture and its continued influence on contemporary practice. The post-war era in Vancouver defined what has become popularly known as the “West Coast Style,” as Vancouver architects won national awards and international recognition for their innovative house designs. This period is now seen as one of the most important in the city’s architectural history.

– Excerpt from the book’s introduction

This past December, B.C.’s Court of Appeal ruled that Bertram and Jessie Binning’s 1941 house in West Vancouver be transferred back to the estate of its original owners, meaning it will go on Vancouver’s red hot real estate market to be potentially sold to an international buyer, someone who may very well never even live in the house. This new owner, as is their right of ownership, may choose to tear it down to maximize the floor-to-site ratio (FSR) that the land under the house has been zoned for, as has been the fate of countless houses in the Metro Vancouver area for the past several years, due in much part to interest rates being at historic lows.

The difference with the BC Binning House, as it is otherwise known, is that this is no ordinary composition of wood and glass, concrete and plaster. This house represents the very heart and soul of Vancouver’s architectural legacy, having been the nucleus for artists, architects, and other designers since the time of its construction in the 1940’s. It was where Lawren Harris came after moving to Vancouver at that time, as well as Richard Neutra who Binning invited to speak at the then newly formed UBC School of Architecture. It is no surprise then to hear that a group known as the the West Coast Modern League, along with UBC, are seeking a covenant on the house to protect it against alteration or demolition.  Designated as a historic site by Parks Canada in 1998, the court ruling in December was an unfortunate step backwards, and now jeopardizes the fate of this important cultural landmark.

And so then it is no small coincidence that at the same time there has been a marked resurgence of interest in Vancouver’s Modern residential architecture heritage, first seen with the 2012 release of Coast Modern by local filmmakers Gavin Froome and Mike Bernard, and most recently reaffirmed with a handsome new monograph, The West Coast Modern House, edited by Greg Bellerby, former curator of the Charles H. Scott gallery at Emily Carr University. Published by Figure 1, known for their large format books on the visual and culinary arts, this new edition is a sumptuous feast for the eyes, with its 192 pages filled with numerous photographs on the subject.

With the support of the Canada Council of the Arts, Christopher MacDonald and Jana Tyner have here provided poignant essays on the subject along with Bellerby, who as well includes a 1947 essay written by none other than C.E. (Ned) Pratt. One of the undisputed master-builders of Vancouver’s Modern post-war era, his work is included in the main body of the book alongside Ron Thom, Arthur Erickson, and Barry Downs, all of whom cut their teeth working at his office of Thompson, Berwick, and Pratt.

The sepia-toned photographs of the 53 selected houses – many of which consist of modest light wood framing interspersed with poured concrete, heavy timber structure and single glazed fenestration – include many famous exemplars of the housing type, starting with BC Binning’s aforementioned house along with Arthur Erickson’s first and second Smith houses. As Christopher MacDonald points out in his essay, the architects were often also their own client, boldly exploring what at the time was uncharted territory using new building materials to construct their homes on pristine sites, many located on the lower slopes of Vancouver’s North Shore mountains. As well as BC Binning’s own home, also featured are those of Ron Thom, Zoltan Kiss, Douglas Shadbolt, Peter Oberlander, and Barry Downs, to name only a few.

In Ned Pratt’s essay on the subject, written in 1947 for the Journal of the Royal Architectural Institute of Canada, he observed at that time a tendency toward a more contemporary approach by the young architects of the day, but noting the general public was resistant of this new aesthetic, still wanting traditional looking houses despite their at times unsuitability for the Pacific west coast climate. “Prior to the war, domestic architecture was in a rather sorry state. The architectural styles ran from the “Cottswold Cottages” to the au moderne of the corner windows, bulls-eye windows, etc. The three popular styles were Tudor, Cape Cod, and Georgian, and the architects that championed these three styles, of course, were famous and enjoyed a lucrative business. This then was the situation that confronted the young and enthusiastic architect, aspiring to persuade an unappreciative public to build in a more logical way.”

As it turned out, Pratt’s essay was written to accompany photos of many of the same houses that Bellerby has showcased in his new book. And so it is most fitting that the last dozen pages of the book (in colour) are devoted to the next generation of West Coast house designers, including the work of David Battersby and Heather Howatt, as well as Javier Campos and Michael Leckie. Patricia and John Patkau are here as well, as certainly no book on the subject would be complete without them, being as they have been both inspiration and teacher to so many of the region’s new generation of architects. For the book, Bellerby has selected their recently completed and much lauded Tula House on Quadra Island as the present day embodiment of the Modern west coast house.

Whether as a handy reference for educators of architecture and design, or simply for those who appreciate the regional expression of this modernist legacy, The West Coast Modern House is essential reading material, and one of the most comprehensive monographs on the subject to date. As for the BC Binning house, one can only hope that the Trustees and UBC are able to identify a buyer whose own intentions honour the last wishes of Jessie Binning, who expressed in her will that the house remain in the public domain, to be celebrated and cherished for what it has meant over the years to both our local and national architectural community.

Editor’s note: A condensed version of this review appeared in the June issue of Canadian Architect.