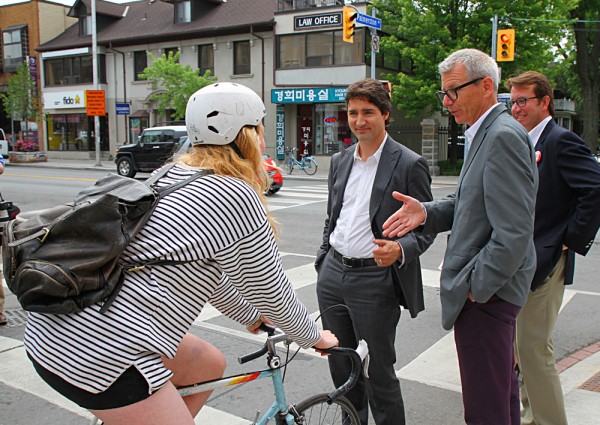 A month before the election, Calgary’s hugely popular mayor Naheed Nenshi told a reporter: “Whoever gets transit right, whoever figures out how to improve the quality of life for people who live in Canada’s cities, well that person gets to be prime minister.”

Many voters in Canada’s largest cities decided that Justin Trudeau got cities best: all of Toronto’s 25 ridings went red, as did most in the 905 belt, Winnipeg, Vancouver, Halifax and Montreal. And, for the first time in almost 50 years, Calgary elected not one, but two Liberal MPs.

As Vancouver mayor Gregor Robertson told me in an interview last week, “Voters spoke loud and clear for cities.”

This election affirms that cities have regained their political voice. But if Trudeau is to continue harnessing the power of the urban voters who put him into the Prime Minister’s Office, he must emphatically commit to creating a strong institutional relationship between the federal government and urban regions, even if the constitution suggests that municipalities are “creatures” of provinces.

The mayors of Canada’s largest 22 cities are members of the Big Cities’ Mayors Caucus (BCMC) and together represent fully 40% of the country’s population. This body, which has put together a robust national agenda for cities on issues like housing, transit and infrastructure, deserves a seat at Trudeau’s renewed intergovernmental table.

Section 92 of the British North America Act gives provinces power over “municipal institutions.” But in 1867, 80% of Canadians lived in rural areas and 20% in cities. This proportion today is reversed. Yet for decades, provinces have treated municipalities like unruly teenagers while prime ministers and premiers used the constitution as an excuse to avoid forging a federal-municipal relationship.

In recent years, some provinces have elevated the status of their largest cities with charters or special legislation. In 2006, the Ontario Liberals granted the City of Toronto extra taxation and accountability powers, and Queen’s Park must now directly consult Toronto if it is planning to introduce new policies that will affect the city. Montreal, Quebec, Edmonton and Calgary are all pushing for the same framework, replacing one-size-fits-all municipal acts.

Yet big cities contend directly with federal policies, such as immigration, disaster relief, and homelessness. Urban mayors – and most Canadians – know that regardless of wording in legislation, it doesn’t matter which government is technically in charge; what matters most is that things get done as quickly and efficiently as possible. While the Conservative’s infrastructure transfers were substantial, Ottawa largely allocated dollars based on political patronage instead of policy. Much of the rest of the federal-urban relationship was ignored.

Trudeau’s platform has promised to end these politicized spending decisions by making infrastructure funding more transparent. The Liberals offered up dozens of policy pledges, including a quadrupling of public transit funding, renewing federal investment in housing, and investing in social infrastructure such as seniors housing and daycare, all issues that matter most in large urban areas.

But does regime change provide an opportunity to fundamentally change this fraught relationship, beyond simply transferring dollars? Robertson, currently BCMC’s Chair, concedes that the municipal sector opted to avoid that discussion in the past. “Mayors have been reluctant to challenge the Constitution.”

Robertson is emphatic that cities need the federal government to fulfill its promise to increase funding, especially for infrastructure. He also believes that BCMC has the right institutional structure to get those dollars flowing.

Yet some legal scholars believe that the language of the Constitution should be interpreted as a “growing tree,” respectful of today’s context, not as fathers of the BNA Act wrote it 148 years ago, before we had cars, indoor plumbing, subways, subsidized housing and income support, which are largely delivered by big cities.

Towards a new partnership?

BCMC’s members, including mayors from every province, have tremendous political capital and are no ordinary interest group. They have first-hand knowledge of enormously significant issues facing the country. Robertson, Edmonton’s Don Iveson, and Brian Bowman of Winnipeg represent a generation of young, energetic leaders with new ideas and a hopeful vision that arguably sets the stage for the acceptance of an equally youthful prime minister.

Other countries have recognized the importance of linking national and local government. Strengthening and formalizing the federal/municipal relationship has been a part of President Barack Obama’s agenda. In 2009, he set up, by Executive Order, the Office of Urban Affairs, which reports directly to the President and the Office of Intergovernmental Affairs. He regularly attends the U.S. Congress of Mayors, which represents cities with populations of more than 30,000. Experts say that Obama’s urban agenda led to an unprecedented level of interagency collaboration and new initiatives like the Partnership for Sustainable Communities, the Affordable Care Act and the Promise Neighborhoods Program, all aimed at helping the urban poor. Still, as the University of Toronto’s Richard Florida notes, still more can be done to advance urban needs.

Trudeau has the opportunity to go further by making cities direct partners in crafting and implementing policy solutions on housing, infrastructure and the environment. In bringing cities to the table, Canada and the provinces will be forced to reconsider their governmental relationship to the four in five Canadians who live in urban centres.

As Robertson puts it, “The dark ages of cities without resources and jurisdiction isn’t going to serve us in the 21st century. BCMC is hopeful that the Trudeau government truly wants to build a strong partnership with cities. An institutional structure will help.”

Alexandra Flynn is a PhD candidate and adjunct professor at York University’s Osgoode Hall Law School. Follow her at @alexandraeflynn.