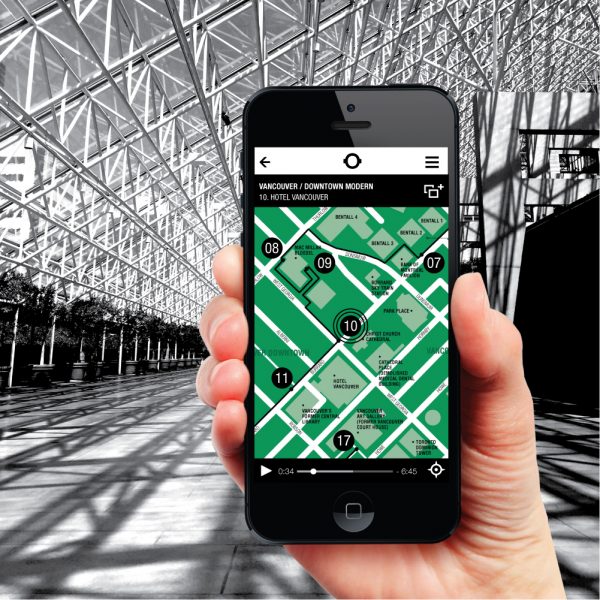 Portrait Sonore is a not-for-profit Montreal-based atelier of architects, artists, and musicians who have for the past decade been creating walking tour apps of major Canadian cities. This new Vancouver walking tour app is their latest collaboration with Vancouver local architect and Spacing contributor Sean Ruthen. Previous walking tour apps are available for Montreal, Quebec City and Toronto already released. Future walking tour apps will include Winnipeg and Halifax.

Vancouver Downtown Modern is an experience in sight and sound, a 120-minute experiential walk through the heart of the central business district, a continuous immersion in sound-scapes, information and music. Personal accounts from renowned architects and experts offer a fresh look at Vancouver’s modern past as their testimonials inspire new visions for the city, and inspire us to think about Vancouver’s future.

Throughout the walk, the narration and original musical score evoke the spirit of modernity, directly inspired by the forms and materials of the Modernist era. Musicians from the local scene include: Fond of Tigers, Loscil, and Leah Abramson. Interviews and music combine to create a new and lively portrait of the modern city. This audio-guided walk starts at Waterfront Station and ends at Robson Square. We hear about the growth of Vancouver as a metropolis and we learn about the significant changes carried out in the 1950s.

Discover the spirit that made Vancouver a city of great promise, the conflicting ambitions and visions that brought about the development of Vancouver in the 20th century. Learn more about Vancouver’s modern heritage buildings through the testimonies of the ones who created them and worked on their conservation. Testimonials include Cornelia Oberlander, landscape architect, Bing Thom, architect and urban designer, Peter Busby, great proponent of green building design, author and architectural historian Rhodri Windsor-Liscombe, and heritage architecture consultant Donald Luxton.

Vancouver Downtown Modern is part of a larger project on major Canadian cities directed by architect Sophie Mankowski with the collaboration of Antoine Bédard and Serge Rhéaume (the original founders of Portrait Sonore). The works selected in each city include significant post-World War II buildings, witnesses to the architectural effervescence of the 1950s through the 1970s, and buildings that marked the development of each new Canadian urban centre. Some 70 experts and architects, urbanists, designers, and historians have participated so far. Through their stories, it is the tale of a modern country that is told, one where art, architecture, and design take a prominent place.

The walk is available free for download online, in English at www.portraitsonore.org/en/pages/vancouver.

Visit the Portrait Sonore website to find out about walking tour apps on Montreal, Quebec City and Toronto.