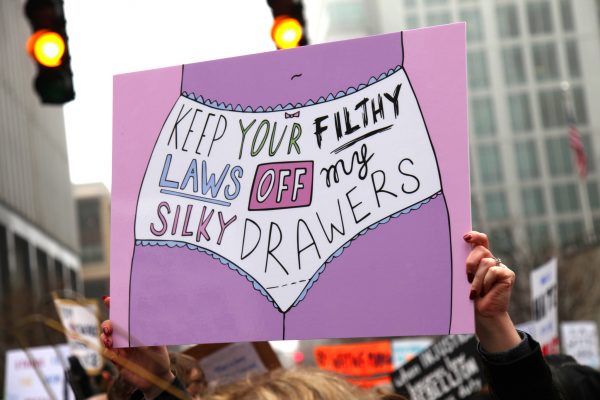 What kinds of thoughts, I wonder, were skittering through the minds of Conservative leadership hopefuls Kellie Leitch and Kevin O’Leary when they tuned in to the astonishing scenes of protest from around the world on Saturday?

When considering the tens of thousands of Canadians who marched in big cities (here, here, here, here and here) across the country, including those in Alberta, as well as the thousands more who flew down to Washington, did these two candidates think, “Hmm, perhaps I should proceed with caution?”

Or did they say to themselves, “Yes, I do believe this Donald Trump fellow is on to something…?”

As #45 embarks on his first days of, uh, work, it seems to me that the Tories should be reflecting carefully about whether he’s the wagon to which they want to hitch their fortunes. After all, what the world witnessed on Saturday was a gigantic, pink-hot ball of political energy that clearly doesn’t care about borders, mobilizes rapidly and won’t dissipate any time soon.

Leitch, really, barely belongs in this analysis: she is a fool — a sitting member of an electorally-successful government that was only defeated when it decided to abandon its assiduous courtship of suburban newcomer communities and instead embrace the sort of dog-whistle nativism that she’s decided to use as her brand.

O’Leary, who threw his fur-lined coat into the ring the day before Trump’s inauguration, bears more scrutiny because on the surface, his electoral appeal — a posturing reality TV star willing to call ‘em as he sees ‘em — is an attempt to repackage Trump’s celebrity for Canadian audiences.

Of course, I don’t want to say an O’Leary victory — both at the leadership convention and then in a general election — couldn’t happen; it absolutely could. But as the Tories weigh their options, they’d be wise to ponder what the world will look like to Canadians in 2019, when they have to square off against Justin Trudeau’s Liberals.

No one, of course, knows what kind of international crises Trump will provoke (I shudder to think) between now and then. But on a range of other policy files, he and his advisors have given Canadian officials many reasons to worry about how we will fare once the Republicans have operationalized Trump’s America First rhetoric.

Corporate taxes. Trump has vowed to slash taxes on American companies, a move that, if successful, will affect Canada in two ways. The marginal U.S. corporate tax rate is 40%, which is almost 14% higher than Canadian levels. If the U.S. moves to reduce that rate, it seems likely that some firms in Canada will have an incentive to move south, especially if the Trump administration makes trade more difficult and costly. That dynamic translates into a potential loss of jobs (direct and indirect), and a decline in tax revenues that will have to be made up elsewhere. The Tories could try to squawk about how our rates are too high, but the argument will seem ridiculous given that one of Stephen Harper’s signature policies early in his only majority term was to make sharp cuts to the corporate tax rate to bolster productivity.

Trade. Despite his pledge to renegotiate NAFTA (re-iterated yesterday), I’d say it’s an open question as to whether Trump & Co. will actually deliver an aggressively protectionist trade policy, or if they’ll succumb to lobbying from trans-nationals with huge investments in overseas plants. Regardless, there’s already anecdotal evidence that some of the automakers are looking to curry favour with the Administration by revisiting their plans to set up factories outside the U.S. in the face of Trump’s threats of tariffs. But because these manufacturing supply chains are global and highly interconnected, there’s little chance that Canada will be immune from this process. For example, General Motor’s sprawling Oshawa plant has lost product mandates in recent years, and there’s been persistent speculation about whether the company will shutter the facility altogether. That outcome seems more likely now. Will the Tories be able to blame the Liberals for these developments? Unlikely, especially given that both Liberal and Conservative governments have poured megabucks into that sector.

Energy. There’s almost no question that Trump intends to create advantages for the U.S. energy industry by eradicating environmental regulations; spurring the coal mining sector as well as domestic oil and gas production (including, I’d expect, in environmentally sensitive regions, like Alaska and the Arctic Ocean); and generally making the world safer for Exxon.

In the aggregate, Trump’s policies are likely to drive down energy prices, which will have a direct bearing on Canadian exports as well as the dollar. According to the federal government, Canada remains the world’s largest exporter of crude to the U.S. – 43%, or $96 billion in total energy exports. Alberta is happy and rich when the U.S. imports our energy, so Trump’s agenda looks like a threat (thus the Trudeau government’s insistence on continuing with approvals on pipelines to the Pacific).

The second coming of coal also will also hit the revenues of provincial utilities in Manitoba, Ontario, Quebec and Atlantic Canada, all of which have been gearing up to sell more surplus hydro power to northern U.S. states where electrical utilities were looking to reduce emissions to comply with Environmental Protection Agency carbon policies that are now being erased.

All told, the Trudeau Liberals in the next few years will be severely challenged to find a way to respond to the economic elements of Trump’s agenda while simultaneously maintaining an independent foreign policy (e.g., declining to suck up to Vladimir Putin; hewing to the Europeans’ view of climate change, etc.). Nor do I see either Trump or Trudeau going out of their way to make the customary overtures about the great friendship between the two countries. Neither’s reputation is burnished by that kind of diplomatic footsy.

Which brings me back to O’Leary. One could argue that all of the foregoing presents the leaderless Conservatives with an opportunity to present themselves as a party better positioned to deal with Trump.

But is O’Leary that guy?

I just don’t see it. O’Leary has made no bones about his intention to present himself as Canada’s Trump –although he’d no sooner filed his papers than he promptly set to work distancing himself from his on-air bloviating, claiming all those pearls of Dragon-y wisdom weren’t “policy.”

Yet three years from now, when Canada is having all sorts of problems with the Trump Administration and Trump himself may be exploring new frontiers of presidential unpopularity, will O’Leary be setting out to tell voters that being Trump-like is the solution to what ails them?

Surely, he can’t have it both ways. To me, Trump-as-the-antidote-to-Trump is, on its face, an absurd value proposition. Moreover, I suspect that by 2019, the intoxicating elixir O’Leary is offering voters will have lost its fizz. But if that’s what the Tories want to do, far be it from me to stand in their way.