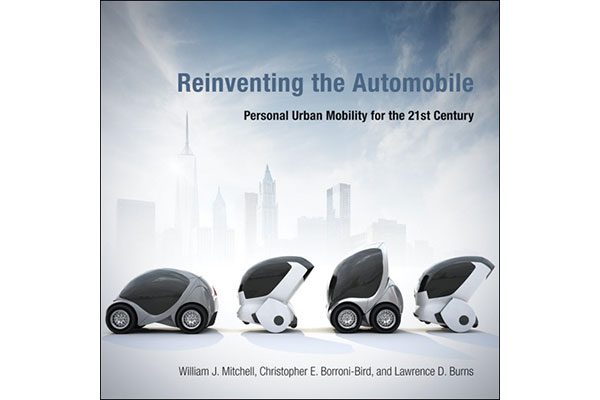 One technology that is due for an update is the automobile. The design of a car follows the same general practices that were put in place when Ford unveiled the Model T. Now, over a hundred years later, it is one massive part of our lives that has not moved with the times. The introduction of electric cars started the push, but the new direction is full automation. Not long ago, I wrote a piece on Spacing outlining how Uber’s model of on-demand ride-sharing is revolutionary when paired with the idea of autonomous cars. I’ve had many discussions since where friends and readers were confused: why Uber? While reading Reinventing the Automobile: Personal Urban Mobility for the 21st Century, all the same basic ideas that I’d researched for my article were there. But what is lacking is a concrete way to roll something into development, hence the focus on a company like Uber. Looking to the book, we see the same pitfalls of all automated tech, mostly that there are all these fascinating ideas on how these vehicles could be implemented, but not who will implement them—which is a far bigger issue and this was something I was hoping would come up more.

While the book breaks down an in-depth look at automated cars, the fact that it was originally published in 2010 makes some of the information included within a little dated. The beauty of that, however, is that while some of the technical information in the book doesn’t stack up to today’s, it shows the reader just how far we have come in a relatively short period of time. The premise of the book, beyond showing just what autonomy in vehicles is and how it works, is the MediaLab CityCar, an MIT Laboratory concept vehicle that is quite impressive. The book goes through explaining many aspects of the vehicle, and how its design (and others like it) will change everything from how we commute to our infrastructure.

The CityCar would be better referred to as a pod, seating two people in a small and compact way. It looks similar to a SmartCar, but the big difference is it’s ability to switch from a more upright posture when you enter and are parking, to a laid back, more traditional looking vehicle when driving. What this does is transform our roadways. Because of the tight horizontal footprint, the authors argue that the car could be used in existing bike lanes, and when parked, the car will slide upright to reduce its footprint in length, allowing for more dense parking or a reduction in stalls altogether.

This also brings up the idea of stacked parking where, if you are using a ride-sharing service, parking lots can be drastically reduced as the cars can wait in a straight line, operating under a system where the first car is sent off when hailed, all the cars move up, and a returning car would queue up at the back—a topic I’ve touched on in other posts that speak to infrastructure and autonomous car fleets.

The end goal is to have a fully autonomous fleet in city cores that can take up a smaller footprint in the road, leaving more space for pedestrian use and transit systems, while utilizing electric motors to reduce our strain on the environment. As the book progresses, the facts become thicker, and chalk full of raw data about everything that would pertain to an autonomous cars survival, from sustainable sources of energy, to charging options, to infrastructure changes, and even market viability. Uber has a fee structure that includes Surge Fee’s, a rate hike when your zone is very busy. The same idea is proposed by the authors for the autonomous fleet of CityCars: “Price signals regulate the demand for vehicles and parking spaces – smoothing the spatial distribution of demand across the service area and the temporal distribution of demand at each access point.”

The book ends with a set of steps showing where we need to go, and what needs to be done in order to achieve a fully on-demand autonomous fleet. While I stand by my original article using Uber as the means to an end, I do understand that it does not have to be them. Uber has started an autonomous fleet pilot program, as has Google, but the main fight is not going to be legislative, or infrastructure, but instead, people’s perceptions. We’ve spent over 100 years driving cars a certain way, and as automation slowly trickles out, we will see the occasional headline about a fatal accident or another crash. Tesla’s first fatal crash happened in July of 2016, followed by another in China in September of 2016. Uber’s autonomous crash, where no lives were lost, happened in March of 2017, causing Uber to suspend their automated trials.

If we look just at these items, and solely in the US, there was one fatality and two crashes in 8 months. Over that same span of time (8 months) in the latest dataset (2015) there were 23,394 deaths by motor vehicle in the US (35,092 for the year), most of which are not covered by media.  Naturally, new forms of technology will get all the headlines. Reinventing the Automobile: Personal Urban Mobility for the 21st Century focuses on how and why we should make the switch to autonomous vehicles, be it for safety, the environment, or for ease of personal access and the ability to build denser cities as our population grows. While the data is slightly dated by now, there are still several important lessons to be learned through the book. If you are interested in automation, it is completely worth the read.

For more information on the Reinventing the Automobile: Personal Urban Mobility for the 21st Century, visit the MIT Press website.