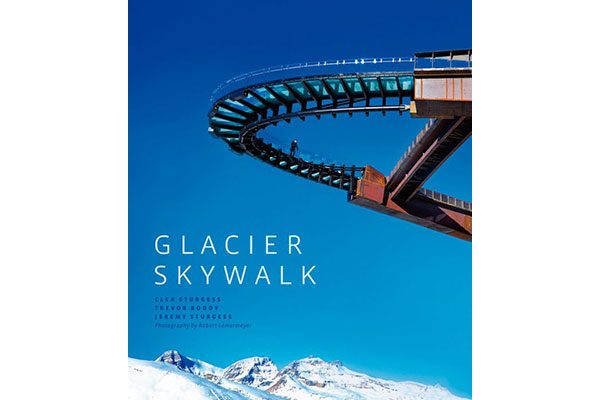 The Glacier Skywalk construction process had to be carefully planned to be as efficient as possible on a fixed budget and to minimize the impact on the environment. Skywalk sits on land previously disturbed during the construction of the Icefields Parkway, and Parks Canada had already designated the land for outdoor recreation to promote understanding, appreciation and enjoyment of the park’s heritage.

It is often the case in an architectural project that both regulatory and physical restraints of a site can compromise the finished product, but in the case of Glacier Skywalk—a new tourist destination in Alberta’s Columbia Icefields as showcased in this new book from the office of architect Jeremy Sturgess—it is clear these two constraints became an opportunity to realize a new breathtaking architectural experience. Through the collaboration of Parks Canada and Brewster Travel Canada, along with the triumvirate of Jeremy Sturgess (architect), RJC (structural), and PCL (construction), the resulting combination of architectural minimalism paired with structural gravitas was awarded an RAIC Governor General’s award in 2016.

In Glacier Skywalk, authored by Jeremy Sturgess and his daughter Clea, along with architecture critic and curator Trevor Boddy, the reader is given a glimpse not only of the awe-inspiring views of the icefields from the new skywalk, but also the process of designing and constructing it, as photographed by Robert Lemermeyer. In addition to the extensive photos, the architect here has provided several iterations of the design in the form of hand sketches and 3D modeling, as well as the finished product in detailed construction drawings.

The choice to use three different authors to narrate the book provides for an informative crosscut of the building’s production and its experience. Jeremy, as the architect, provides the book’s foreword and afterword, while Clea is the advocate who gives an informative insight into many of the challenges the project endured, such as having to spread the project’s construction over two years due to mountain goat ‘kidding’ on the site. Trevor speaks from the viewpoint of the end user, giving a detailed account of his experience traveling to the site, along with his memories of growing up in Alberta, often visiting the Rockies in his youth.

In the book’s opening pages, a short poem titled “Into Air” by Derek Besant runs across three full-page black and white photographs of the site, the first one being an archival shot from 1924. Given the controversy of the project when it was first unveiled, the project team has done a good job of pointing out that people have been visiting Athabasca Glacier for decades, and that the site of new structure sits directly next to Highway 93, better known as the Icefields Parkway which connects Banff to Jasper. The new Glacier Skywalk experience provides for a safer way for motorists to experience the environs without having to dangerously pull their vehicles over to the shoulder of the highway, with the added experience of the vertigo moment of walking on glass over the icefield floor some 100’ below.

Trevor describes the skywalk experience as a Corbusian promenade architecturale, in that the Icefield tourist arrives by bus to the site—having safely parked their car at a nearby hotel—and then from the drop-off point they travel to a series of pavilions along a linear procession, culminating in the death-defying cantilever which is the climax of the journey. Sturgess’ office certainly proved their mettle in this architectural expression, with a precedent in the design of their Yukon Visitor Centre in Whitehorse.

Corten steel was selected for the exterior to protect the structures given their exposure to brute winter conditions, with teak on the soffits of the pavilions to provide for a softer interface for the visitors to the site. In his chapter called Exploring the Skywalk, Trevor further breaks up his narrative into the individual structures with a recounting of their purpose in the overall building program.

Prior to the book’s release in May, architects in British Columbia had the unique opportunity to hear the experience of realizing the project at the AIBC annual conference, as one of the plenaries featured a panel of the skywalk’s masterbuilders – RJC structural engineer Simon Brown, PCL construction manager Scott Updegrave, as well as Jeremy Sturgess himself. While much of the visual material they used in their presentation was from the book, including the erection of the massive steel girders for the main structure’s cantilever, they included several anecdotes not in the book, such as the micro-piles that were needed when a fissure was discovered at the exact same spot as one of the structure’s bearing points.

Broken into three chapters that coincide with various phases of the project’s realization—Designing the Skywalk, Building the Skywalk, and Exploring the Skywalk—the authors provide a further layer to the book by providing material vignettes, aptly titled Steel, Glass, Wood, and Stone, with each outlining the rationale behind the project’s material expression. Overall, the book provides for a lucid narrative of this visually compelling project, embodying a spirit which one of the book’s authors likens to ‘dancing about architecture.’ And for the modest price of $32 per adult, this is an experience within the reach of everyone who wishes to dance over top the glacier.

Visiting other skywalks in other parts of the world, the architect notes in the book that he did not want the final result to be like his experience at the Grand Canyon, where he felt like so much cattle being shuffled through a pre-designated path. For the Glacier Skywalk, his architecture has allowed for one to take their time, moving at their own leisure between each pavilion prior to reaching the skywalk. And similar to other death-defying tectonic experiences like the Grand Canyon skywalk, including the Cliff Walk at the Capilano Suspension bridge here in Metro Vancouver, the experience of Glacier Skywalk certainly mirrors the challenges which enabled its makers to realize this bold structure, here made lucid in this visually rich and thought-provoking publication produced by Sturgess Architecture.

For more information on Glacier Skywalk, visit the Figure 1 website.