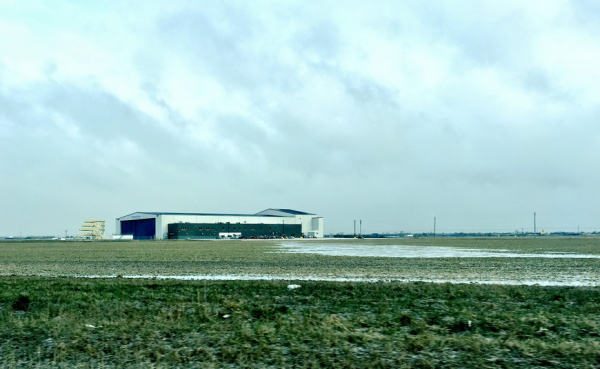 Near the proposed greenfield location of the Windsor megahospital across from the airport. Photo by Shawn Micallef

ED: This op-ed by Shane Mitchell regarding Windsor’s “Mega-hospital” debate is a microcosm of the poor land use planning many Canadian cities and towns suffer from. Do we want to use infrastructure projects to help revitalize the cities we’ve spent a tremendous amount of resources, money and effort building, or do we abandon them for more sprawl? Windsor’s mayor, a proponent of locating the hospital in a farmer’s field, recently moved to punish Windsor Business Improvement Areas that supported a city location.

Mitchell is a an architectural project manager and founding member of CAMPP – Citizens for an Accountable Mega-Hospital Planning Process – a citizen-led group spearheading the debate about good planning surrounding Windsor’s controversial hospital project.

Windsor is a small Ontario city of approximately 220,000 inhabitants located at the southernmost point of Canada, tucked in under Detroit. Famous for Canadian Club Whiskey and the “Big 3” automobile manufacturers, Windsor is somewhat of a stereotypical rust-belt manufacturing city. Like many cities of its kind, Windsor has experienced a major decline of its urban centre – while downtown and most of the surrounding neighbourhoods have struggled for decades, the suburbs surrounding Windsor have grown exponentially. In fact, Windsor’s population hasn’t grown much since 1970. However, the greater region outside of the city, known locally as “The County”, hosts a number of charming small towns, many with vibrant main-streets. These towns have also seen their fair share of suburban style growth disproportionate to that within their urban centres. The entire Windsor-Essex region has for years grown much like the rest of Canada, dependent almost entirely upon the automobile. Downtowns here could use a boost.

It was in 2013 when most first heard of the plan for a new hospital development in Windsor that would consolidate Windsor’s two major hospitals into one. For myself, a project manager for a small architectural firm and a self-proclaimed urbanist, it was an exciting opportunity for my city, but also something that deeply concerned me. It was the description of the land requirements within the report prepared by our local hospital authority that raised a red flag: “sixty greenfield acres”. At that time I began writing my first guest column on the topic in the Windsor Star. I knew that if our new and only hospital were to be moved away from downtown to a remote location far from the city centre, Windsor’s future would be in peril.

If we insist that the new facility be constructed in an urban location, we will be saying that our city matters, that the precious agricultural land that sustains us is valuable, and that we wish our neighbouring communities to grow into strong towns and cities.

For the next three years many from the community came together and formed a group dedicated to advocating for an urban site. CAMPP or Citizens for an Accountable Mega-Hospital Planning Process was formed to educate and advocate for good urban planning, social equality, environmental sustainability and fiscal responsibility in the planning of this new facility. Residents and businesses joined the effort dedicated to the future of the city, but June in 2016 the hospital authority announced what was our worst fear: both of Windsor’s remaining hospitals would be shuttered and new hospital would be built upon, yes, “60 acres of greenfield land” located on the outskirts of town out past the airport.

Fast forward to present day and a few things have happened. The hospital authority has made every effort to push forward their plan, and to do so they began a campaign to get support from the Windsor-Essex region, threatening that if anyone questioned the location, the project would be shelved by the provincial government. It was a campaign that pitted urban residents and business owners against those in the county and the suburbs. During this time CAMPP has continued its effort to “take a stand for the city”. Today as I write this, we are awaiting a hearing to appeal the decision, but the campaign to shutter services in downtown Windsor, leaving the city centre with only an urgent care centre and mental health facility, pushes forward and many residents, particularly those from towns and suburbs that surround Windsor, support the plan.

On taking a stand for the city

Windsor has struggled for decades. While the city has some beautiful neighbourhoods and pockets of great walkable urbanism, many urban areas are blighted and underutilized. This unfortunate situation has left many people from suburbs and County alike with an absolute disdain for urban Windsor. So one can only imagine why disassembling the city – removing its hospitals – is OK for many people in this region. It would mean that they no longer need to travel into the city for services, and after all, the new hospital would be located only a few kilometers from the area’s main, popular strip of big box stores.

Sadly, if the plan proceeds, I fear my city is doomed to continue the process of becoming a “non-city” and nothing more than a fragmented version of what was once a vibrant and beautiful city. However, hope is not lost and the fight for the city is not over. Windsor has a tremendous opportunity. As the citizens and business owners of urban Windsor gear up to defend Windsor in the fight for an urban future, our small city at the end of the 401 could become a precedent for the future of institutional development in Ontario.

Windsor isn’t the only urban centre threatened by plans to close their urban hospital: Bracebridge, Huntsville, Collingwood, the Niagara region and others are fighting similar battles. Windsor might not seem all that important in the world of urban progress, but it very well may soon become an example for other communities fighting to keep their downtown institutions open or perhaps that neighbourhood school from being shuttered. Windsor’s fight is about a problem that plagues us all, that is, the disassembly of our cities. That would waste all the effort and money we spent to build them up in the first place.