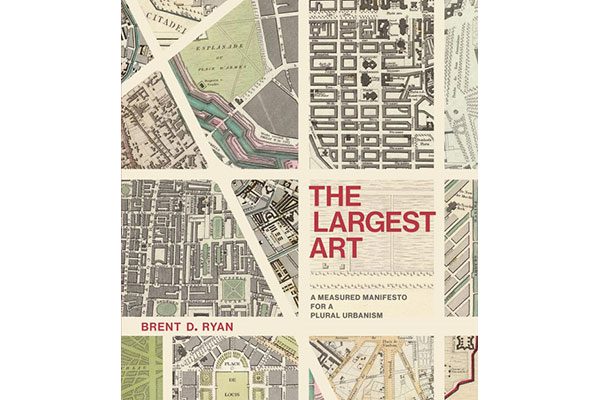 Contemporary cities are the most complex entities humanity has ever created. To be sure, we are only beginning to appreciate the implications and impacts of these extensive urban landscapes. Their intricate, systemic nature makes them difficult to conceptualize, let alone design. Yet, given their global significance—ecologically, socially, economically and beyond—urban design is more important than ever to our future and collective well-being. This makes it all the more important that, despite its challenges, strong efforts and theories be put forth on how to approach the design of the urban environment.

Towards this end, Brent D. Ryan’s The Largest Art: A Measured Manifesto for a Plural Urbanism is a compelling recent addition to archives of urban design manifestos that have sought to provide a clear direction across the murky waters of the field—one that does well to integrate diverse, lesser-known sources and contemporary sensibilities towards a cohesive vision of the potential of urban design in the current global climate.

Listed as an Honorable Mention for the 2018 PROSE Award in Architecture and Urban Planning, the book is structured around six straightforward chapters, each of which incorporates a number of photos and graphics that serve well to articulate the content.

The first chapter Unitary Architecture, Plural Cities is framed by critic Michael Sorkin’s well-known 2006 article “The End(s) of Urban Design” within which he describes three different urban design ideals—modernism, postmodernism, and what he calls “post urbanism”. With this as a catalyst, Ryan briefly describes the histories of the different ideals as set out by Sorkin and the primary promoters of each (le Corbusier for modernism, Jane Jacobs and DPZ for postmodernism, and Rem Koolhaas for post-urbanism).

The concept of pluralism and urban design is then introduced through an examination of the Fun Palace designed in 1961 by Cedric Price—a building that balanced modernist abstraction (its low-cost, simple, minimalist architectural expression) and bottom-up user adaptation. Only partially “designed” by a single person, the Fun Palace incorporated urban life within itself, and in the words of Ryan, had both unitary qualities—in that it had a single designer was a single architectural structure— as well as plural qualities, insofar that it accommodated a variety of uses and design adaptations by its diverse users. He uses this comparison towards differentiating architecture—that biases a ‘unitary’ approach to the built environment—from urban design, that is to Ryan’s mind, a plural art.

The chapter ends with further elaboration on unitary versus plural approaches: briefly describing a few examples (such as Central Park and Seaside), highlighting their codependent relationship and most importantly, the fact that the vast majority of well-known urban design projects continue to reinforce the (false) importance of unitary sites in urban design, pushing aside the true plural nature of the city.

This allows Ryan to critically dissect the three urban design ideals described earlier: describing their shortcomings and highlighting the continued temptation to wrongly treat urban design as a discipline focused on unitary sites. In response, he introduces an alternative, plural urbanism: a discipline that Ryan argues is its own independent art, related to but distinct from, from architecture, landscape, land art, sculpture and other building arts.

This being the case, Ryan speaks to the inherent principles that differentiate urban design from the other disciplines, something he describes in more detail in the next chapter Five Dimensions of Plural Urbanism where he explores: scale, time, property, agency, and form.

The longest chapter in the book, each of the latter ‘dimensions’ is given its own subsection with a number of clear examples. As the foundation of the book, its content deserves some elaboration.

The Dimension of Scale section addresses how urban design cuts across the widest scalar range of any of the building arts, from the tiniest of urban spaces to city districts, metropolitan regions and beyond. Importantly, the fractal nature of scalar increase is examined, as large urban ensembles consist of smaller urban elements that, in turn, are made up of smaller design elements. He also describes the similarities and difference between urban design and arts, such as landscape architecture and land art, that can also encompass larger scales.

The influence of the Dimension of Time on urban design is multifaceted. Given that cities are composed of works created across different time frames, elements from the past are necessarily enfolded into newer works, leaving traces that are difficult to erase completely. Furthermore, urban design projects often take a long time to complete, especially as they increase in scale. As a result, many projects are not fully realized, versus other building arts such as architecture that are often realized over their typical time schedules. This fact, according to Ryan, puts incompleteness is a fundamental aspect of plural urbanism—a subject he elaborates on later in the final chapter of the book.

The Dimension of Property speaks to the fact that the creation of cities and property division go hand-in-hand. With this in mind, Ryan compares two different approaches to property: the American gridded settlement patterns that facilitated property ownership to many (described as the epitome of plural property) as well as the Russian patterns where private property has largely been held by a select few. Ultimately, Ryan describes plural property “as a necessary component of plural urbanism”—noting how it makes the act of urban design much more challenging than ‘unitary’ acts that seek to suppress the diversity through acts such as lot assembly.

The discussion of plural property intersects with the Dimension of Agents—that there are a variety of individuals and groups (with different values and tastes) continually changing the urban landscape. This instigates a brief discussion on aesthetic harmony and visual disorder as it relates to a diversity of agents acting on the city, and ultimately leads to questioning the validity of the urban design profession’s typical practice of transforming “pluralist space into unitary urban form”—and how to permit more agency at the larger scales of urban design.

The final section, The Dimension of Form, describes Fumihiko Maki’s “group form” and O.M. Ungers/Rem Koolhaas “archipelago” as concepts that reach beyond traditional ideas about urban design and point the direction towards plural form that consists of different formal elements that contribute to a larger whole, but are not individually conceived of by a single author.

The chapter is summarized in the Towards Plural Urbanism section that serves as a strong foundation for the remainder of the book that explores the plural urbanism in more depth through sequentially looking at three built works, examining three urban design practitioners/theorists, and putting forth three imaginary design scenarios.

Building on the Dimensions outlined in Chapter 2 the third chapter, Three Pluralist Projects, looks at three specific works that embody many principles of plural urbanism—Constantin Brancusi’s Sculptural Ensemble completed in 1938 at Târgu Jiu, the experimental multi-building Twin Parks subsidized housing project built between 1970-73 in the Bronx untaken by New York City’s Urban Design Group led by Jonathan Barnett, and finally a series of works by Jože Plečnik’s in Ljubljana, Slovenia. Each is succinctly explained: outlining its historical context, analyzing its creation and highlighting its relevance to the concept plural urbanism.

Although the projects chosen are focused on Europe and North America and do not embody all aspects of the plural urbanism idea, they wonderfully complement one another in their diversity and the fact that they share many plural attributes while working across different scales. The fact that they are not canonical, well-known urban design projects is refreshing and serves well to support Ryan’s larger argument that the field biases works that are unitary in nature.

Having focused on built works in the last chapter, Three Pluralist Urbanists, reinterprets the writings of the largely unknown David Crane, alongside those of Edmund Bacon and Kevin Lynch. These are done within the context of plural urbanism proposed by Ryan and do an excellent job of succinctly and critically summarizing key aspects of each of their theoretical positions.

The strengths and weaknesses of each of the theories is clearly explained serving as an excellent spring-point to the next chapter, Designing Pluralist Urbanism, where Ryan attempts to integrate and expand on both the projects and theories: stitching them together more coherently, addressing their weaknesses, and showing their applicability to plural urbanism via three imaginary conditions typical of many cities. More specifically, a “low-density, decentralized suburbia….and urban grid in a post-Socialist state; and…a rapidly growing city in an equality rapidly developing country.”

Each example is given its own fictional history as well as challenges requiring solutions that necessarily engage the ‘five dimensions’ discussed in the second chapter. Also in keeping with his manifesto, Ryan is clear that the design interventions have no specific end, remaining incomplete and ‘imperfect’. Such is the nature of plural urbanism. This open-endedness carries over to the graphics used in this chapter that are intended to give readers a sense of the transformation without a specific ‘final form’.

As one might expect from these fictional scenarios, they offer ‘ideal’ scenarios that intersect very well with the plural urbanism ideas. This being the case, although instructive and interesting, their usefulness is limited and, as stated by Ryan, must be understood in tandem with the pluralist projects and theories described earlier in order to have a stronger sense of how the pluralist concepts can be implemented in reality.

The final chapter of the book—Principles and Potentials of Plural Urbanism—focuses on three principles that Ryan believes characterized urban design, generally, and plural urbanism specifically: those of “eternal change, inevitable incompleteness, and flexible fidelity”.  These are each given their own section and are well-contextualized within all the projects, people and ideas discussed.

Particularly noteworthy was the section on ‘eternal change’ that focused on the role played by urban design representations in propagating the static view of urban design. As someone who teaches the subject of urban representations and constantly discusses the overlooked biases of city visuals, this short section is an invaluable addition to the content.

The chapter ends with a brief conclusion that summarizes the overarching argument: distinguishing urban design from the other building arts while highlighting plural urbanism’s potential and inclusivity—plural urbanism, for example, does not exclude unitary design.

Overall, The Largest Art: A Measured Manifesto for a Plural Urbanism is a strong, timely book that puts forth a clearly articulated argument that recognizes urban design as a unique practice related to but different from the other building arts, and expresses how a “plural” approach might change the way we think about cities and the potential benefits of this transformation.

Although some of its larger implications remain ambiguous—such as how accepting plural urbanism would affect the education of urban designers and city planners—Ryan’s lucid, accessible assertions capture a growing sentiment that the way we regard and address designing the urban environment is in dire need of a conceptual reframing: one that building from and elaborating on potentially lesser-known historical precedents to forge a solid path to the future.

For more information on The Largest Art: A Measured Manifesto for a Plural Urbanism visit the MIT Press website.