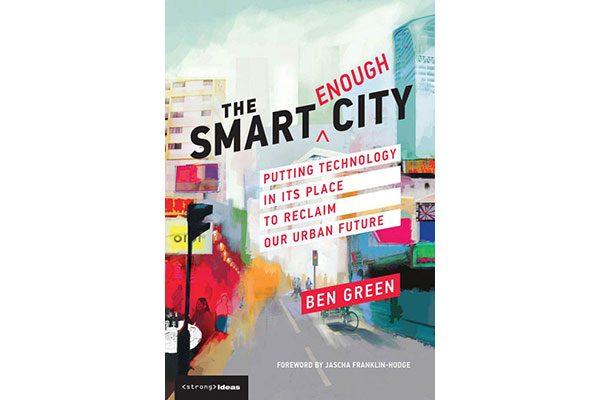 This book is about the battle for the future of cities. The smart city may represent the next major urban transformation, with digital technology playing the role that trains, electricity, and cars have played in the past. But the revolution ahead is not primarily a technological one – many smart city technologies fall far short of achieving their promised benefits. We must instead interrogate the smart city because, through the technologies we employ, we are going to answer some of the most fundamental social and political questions about twenty-first century cities.

If Shaw were still with us today, he would’ve pointed out the irony that, at a time when we have both the global interconnectedness and technology to solve major problems, we are suffering from mass distraction. And let’s be clear, these are some of the biggest crises of our times, including income inequality, climate change, and severe homelessness, to name just a few.

And with distraction as the new opiate of the masses, online news feeds—of which there are probably more than ordained religions— are now a regular part of our day, with tweets, YouTube and Instagram helping us to block out the latest natural disaster, whether it’s floodwaters or a wildfire engulfing another small town. As for politics….let’s not even go there right now.

The fact is that we are now all connected to our smartphones, of which some future good may come–who can say. For the time being, however—and as we find ourselves distracted—there are some very large decisions being made by our municipalities, with this new book, The Smart Enough City from MIT Press, written by Ben Green, being a wake-up call for anyone who cares to listen.

For as he points out in the book’s opening pages, in a 2016 poll it was found that 54 U.S. cities had 800 smart city projects already in place or in the works. The book also has the benefit of providing an insider’s perspective of smart city technology – prior to starting his current PhD work at Harvard, Green was a data scientist in the City of Boston’s Department of Innovation and Technology, from 2016 to 2017.

And while the book is not a blow-the-lids off exposé a la Edward Snowden, the news from Green is not good here as readers are presented with several case studies where smart city technology has had serious negative effects, including even one instance where a seemingly innocuous 311 app contributed to the death of Eric Garner in New York City five years ago.

For while smart city technologies seems harmless on the surface, their social and political underpinnings are much more impactful, and as Green points out, if not done right could make what the automobile era did to cities a century ago look like child’s play by comparison. One of the book’s clarion messages is that the decisions that we are making now about enacting this technology in our municipalities is going to have long-lasting impacts for future generations.

Setting the stage in the book’s introduction, Green offers three simple types of smart city technology easy enough for the layperson to wrap their head around: intelligent intersections, predictive policing, and LinkNYC. The first example is simple enough and has to do with traffic in cities, with the aim of reducing congestion. It also serves as a convenient point of departure to discuss new disruptive smart city technologies concerned with transportation, such as ride-hailing and autonomous vehicles.

The next example, predictive policing, is the use of sophisticated algorithms to fight crime—think Tom Cruise in Minority Report. But it is LinkNYC that is perhaps the most controversial of the three, as LinkNYC is the product of Sidewalk Labs and has to do with data sharing and privacy in the city.

Sidewalk Labs, along with Alphabet Inc.—parent company of Google—was just in its infancy when it won the contract with the city of New York to replace its aging telephone booths with free Wi-Fi kiosks. To date, 1,700 of the 7,500 kiosks promised have been delivered, all for free of charge. In return, Sidewalk Labs gets all the information they are legally allowed to from its smartphone recharging customers. In the words of one New York resident that the book’s author interviewed, “it’s a deal with the devil we really don’t need.”

As the book makes clear in its later pages, even though the big data companies—whose holy trinity is Big Data, machine learning, and the Internet of Things—aren’t allowed access to our personal information online, they get to date stamp us wherever we plug in, log on, recharge or download. This information by itself seems pretty benign, however, as Green points out, combined with just a few more date stamps there are algorithms specifically designed to glean your name and address from them.

And while this information may be pretty common knowledge to those working in the computer and telecommunications industries, what is perhaps most disconcerting about Green’s book is that without most of us even knowing it, various forms of these three smart city technologies—for traffic, policing, and free Wi-Fi—are already in use in various forms in our cities on a massive scale, providing our data to the big tech companies.

To counter this, Green presents us with the notion of “tech goggles”—the blinders that people are wearing when they see things only in black and white, such that their outcomes can be solved by code alone. As the author points out time and time again throughout the book, much of what our present cities do on a day-to-day basis is not black and white at all. So while a smart city app like 311 can get a pothole fixed or streetlight repaired, it cannot determine why, for instance, a lower-income ethnographic is being under-represented at the polls.

The book is then a request that city councils and public officials be wary of wearing tech goggles, as has happened in the recent past when the automobile and freeways were allowed to transform our cities… and the harm from which we have spent the last fifty years undoing.

Green divides his book into seven chapters, each looking in its own way at smart city paradigms. The first chapter, The Smart City, gives us the present day definition, followed by one that looks through transportation (The Livable City) and governance filters (The Democratic City).

The next three chapters look at present problems with smart city technologies, starting with predictive policing algorithms being used in Chicago that led to racial profiling (The Just City), while the next two—The Responsible City and The Innovative City—cover discussions around the privacy of data, with Sidewalk Labs and LinkNYC being the focus.

The final chapter of the book, The Smart-Enough City, is the synthesis of Green’s exhaustive case studies: concluding that the way cities currently operate needs to be better prepared for these new technologies, and not just have them applied wholesale as has been done to-date. Put another way, the change has to be transformational and not merely transactional.

Green also cites several quotes from the current CEO of Sidewalk Labs, who has the vantage point of seeing these new disruptive technologies implemented on a global scale, from granular things such as apps, to larger urban scale items like autonomous vehicles. Much of this is also what is envisioned for Toronto’s new controversial waterfront and this is given a brief mention in the book’s closing pages (and for Spacing’s latest on the subject, read John Lorinc’s excellent piece here.)

Green also devotes some of the book’s final pages to discussing Robert Moses and Le Corbusier, representatives of what he believes is the last generation of tech-goggle wearers (believing Le Corbusier, in particular, would have been a strong advocate for smart cities). And while Green makes mention of Orwell’s 1984 and Kafka’s The Trial, missing are references to the dystopias of Phillip K. Dick, who has been Cassandra to what we are presently seeing in the smart city landscape (Blade Runner, Minority Report, etc.).

In the end, the book needs us to ask What is smart enough? and Green is correct—we do not want the tail to wag the dog here, as he reveals in The Livable City chapter showing how the City of Toronto transportation department were slow on the advent of Uber. As they told him, they want to be sure they don’t repeat the same mistake with autonomous vehicles.

Perhaps a sequel to this informative and current discussion of the topic could be a call-and-answer piece from the urban planning and design community, as one would expect much of the city business discussed here is much more concerned with public bureaucracy and less with urban and architectural issues. As the architecture and allied design professional community is already contributing to smart cities with BIM, there is something here for everyone in both the private and public sectors.

An incredibly rich series of smart city case-studies currently affecting several city administrations, The Smart Enough City should be required reading for anyone on a city payroll: it is a primer on how our cities are radically being transformed right from under us, and that if we don’t look away from our phones for long enough we are all going to miss this hallowed event.

For more information on The Smart Enough City, visit the MIT Press website.