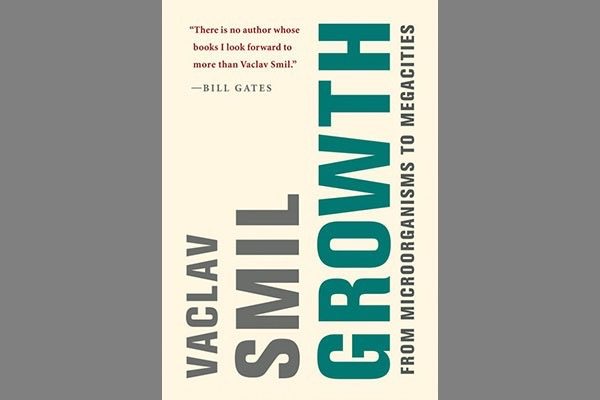 There are few terms as pervasive in discussions about contemporary cities than “growth”. It monopolizes debates around everything, from economics and population, to buildings and agriculture. This being the case, getting a strong understanding of growth, in a broad sense, would seem to be critical for anybody interested in the built environment. Yet, to my knowledge, no such undertaking seems to have ever been attempted….until now, with the publication of Vaclav Smil’s Growth: From Microorganisms to Megacities.

The perfect complement to Geoffrey West’s excellent Scale: The Universal Laws of Life, Growth, and Death in Organisms, Cities, and Companies (another must-read book for any urbanist), Smil’s in-depth quantitative analyses on growth across the natural, technical and social spheres is a rich and unique work from one of the leading interdisciplinary minds in the world today.

Given the breadth of the topic, the structure of the book is necessarily straightforward, following “…a natural, evolutionary, sequence, from nature to society, from simple, directly observable growth attributes….to more complex measures marking the development and advances of societies and economies.” The systemic nature of growth across these categories is not taken for granted, as Smil does well to highlight interconnections and interdependencies within each chapter, as required.

It is worth noting that despite the ambitious coverage on organisms, artifacts and more complex social and economic systems, Growth is not all-encompassing and excludes the largest (universe, galaxies, terraforming, etc.) and smallest (subcellular, genetics, etc.) scales in order to keep the volume manageable in size and scope. The parameters of his study are explicitly stated in his succinct Preface as a part of outlining the intentions of his book.

With the above constraints in mind, the book is divided into 6 overarching chapters —Trajectories: or common patterns of growth, Nature: or growth of living matter, Energies: or growth of primary and secondary converters, Artifacts: of growth of man-made objects and their performance, Populations, Societies, Economies: or growth of the most complex assemblies, and What Comes After Growth: or demise and continuity—each of which is broken down into sections describing specifics related to each category, several of which I will describe in the breakdown below.

To fully describe the content of each expansive chapter in depth is well beyond the scope of this book review. Instead, I will summarize the content broadly, focusing slightly more on key topics that would interest those concerned with cities and settlements.

The opening chapter—Trajectories: or common patterns of growth—is both the most technical and important chapter in the book, as it describes the basic patterns of growth: laying out standard measures, some historical background and when they are used. This includes a section on linear versus exponential growth patterns as well as confined patterns of growth, including S-shaped (sigmoid) growth.

The two basic categories of collective outcomes of growth—normal distribution pattern/curve and those conforming to one of many specific power laws—are also covered, touching upon asymmetrical distribution patterns (such as Pareto’s Law and Zipf’s Law that are very relevant to the cities, as explained in this review of Michael Batty’s Inventing Future Cities).

As one can see, the content of this chapter isn’t necessarily for the faint of heart, but mathematical formulas are few, and the graphs and imagery peppered throughout allow readers to get the overall gist of the different growth patterns, without fussing over the details. The rest of the chapters build off this fundamental knowledge, shying away from the technical by referring back to Trajectories to describe the different types of growth patterns evident across natural, social and economic worlds.

An urbanist would be forgiven in thinking of jumping directly from the first chapter to the fifth that covers populations, societies and economies—assuming that everything in between has minimal relevance to the city—but doing so would be a big mistake. Every chapter uncovers significant patterns relevant to settlements and the built world.  Along with human growth, for example, the second chapter—Nature: or growth of living matter—touches upon agricultural yields, animal husbandry, viruses, and trees, each of which has implications for—and direct connections to—cities and populations patterns.

Similarly, the development of human environments at all levels—past, present, and future—are intimately connected to the means of transforming one type of energy to another (“energy converters”). This is the focus of the third chapter, Energies: or growth of primary and secondary converters, that looks at the growth of methods of harnessing water and wind, as well as steam (boilers, turbines, etc.), internal combustion engines, nuclear reactors, photovoltaic cells, and electric lights and motors. Those with a working knowledge of urban history will undoubtedly be able to make connections between the development of many of these technologies and their impact on settlements around the world. Moreover, assertions like those stating that solar technologies have “an assured and expansive future” point to areas in need of strong planning considerations.

Artifacts: of growth of man-made objects and their performance is particularly important to the city-minded insofar that includes interesting sections on growth patterns of architectural structures (i.e. skyscrapers, etc.), infrastructure (tunnels, bridges, roads, etc.), and transportation systems (cars, ships, airplanes, etc.). A section on consumer electronics and mobile devices also points to some fascinating patterns that will affect the lives of people for decades to come. To what degree they might affect the physical form of cities is an interesting question to ponder.

The fifth chapter, Populations, Societies, Economies: or growth of the most complex assemblies, will undoubtedly appeal to those immersed in the urban landscape. It is divided into 5 sections—looking specifically at Populations, Cities, Empires, Economies and Civilizations—and covers a wide array of important issues, from demographic transitions, future population growth and megacities, to food production, energy and sources of economic growth. Needless to say, this chapter is essential.

What Comes After Growth: or demise and continuity provides a strong finale to the book. Smil wisely opens the chapter describing common errors in forecasting future growth trajectories and examples of the adverse effects of the indiscriminate use of growth curves. He then revisits all the main chapters categories highlighting to what degree they might collapse or continue into the future.

Overall, Growth: From Microorganisms to Megacities is an exceptional and rare book, unparalleled in its cross-disciplinary examination of growth. The nature of the subject demands the analytical rigour Smil provides—accompanied well by his lucid, matter-of-fact tone that minimizes the technical to highlight key patterns.

Ultimately, readers are the beneficiaries of his colossal effort and, in being an outstanding reference guide for growth in its many forms, I don’t hesitate to say that Growth should find its way onto the bookshelves of everybody interested in understanding the complexity of growth and how it affects the urban landscape.

For more information on Growth: From Microorganisms to Megacities visit the MIT Press website.