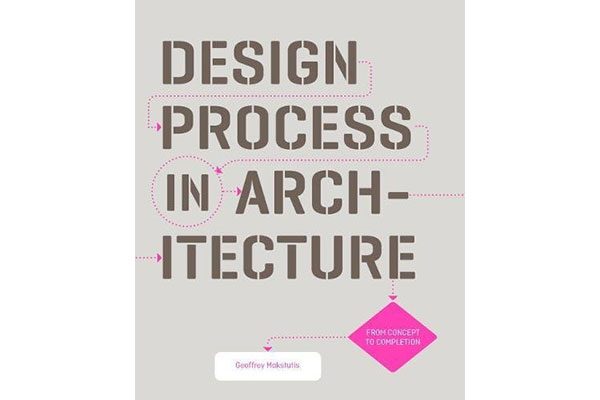 This book will be particularly useful for those who are considering – or are in their first year of – studying architecture. Because of the nature of the design process, there are many aspects that may be translated to other design disciplines, but this book will rely on architectural examples. The projects illustrated here include both realized projects designed by established architects and the work of architecture students.

With a current spate of handbooks for architecture students having been recently published—including 101 Things I Learned in Architecture School by Matthew Frederick and Design School Wisdom by Brooke Johnson and Tolo Pierce—Laurence King Publishing’s recent release, Design Process in Architecture: From Concept to Completion, could soon find itself as indispensable a student resource as Francis Ching’s Building Construction Illustrated.

Written by Geoffrey Makstutis, both a former student and professor at the Architectural Association in London, he shoots straight from the hip here to deliver the fineries of architectural design, from the basics of what constitutes good design, to some recent examples by current practitioners, many of whom would’ve been his professors at AA.

Delivered in eight terse chapters, each accompanied by rich photographic case studies and diagrams, the author begins by stating the things he believes constitutes good design—namely, that it be collaborative and iterative, always remembering that it is a service and not a product. Makstutis also believes design to be a deeply personal act, and that the outcome of every designer and architect is something highly unique and idiosyncratic.

And most importantly, he acknowledges that an architectural education is different depending on the person, and that the intent is that the book not teach one how to design, but more to support the individual designer’s understanding of the different ways of managing the design process, out of which the individual’s own voice can emerge.

Included in the book’s introduction is a section on How to Use This Book, in which he breaks down the design process into eight steps. In the first step, he defines the basis of the design process as Research, Proposition, Analysis, and Revision –  the bones upon which all else is to rest, including the following chapters in the book.

Chapter 2, The Tools of the Design Process, looks at the architect designer’s tool-belt: the sketchbook and orthographic drawings, sketch models, construction drawings, and even Building Information Modeling (BIM). Among many others included throughout the book, the author here describes the case study of an AECOM project in London which was a collaboration with many diverse user groups, and how the illustrations that were the outcome of those consultations became a strong visual tool for the project’s designers.

The next chapter is a bit more abstract as it tackles the task of mapping the design process, which is often done using bubble diagrams. The chapter opens with the now-famous meme from Apple Creative Director Tim Brennan, showing a question mark turning into a dollar sign, but only after going through a chaotic cloud of activity. This chapter also attempts to define the scope of practice that an architect performs, with the author providing the 2013 RIBA Plan of Work and its seven stages, much similar to the seven stages that currently constitute the AIBC (and similar to the other Canadian jurisdictions) Architect’s Standard Scope of Services.

In the book’s fourth chapter, Approaches to the Design Process, Makstutius begins to give us some of his own personal inspirations for design, including the Parthenon, the wonderful Meyers Kleines engravings of the classical orders done in 1892, as well as a case study devoted entirely to the architecture of Mies van der Rohe. The work of his former design professor Zaha Hadid is also here, as well as projects from UN Studio and Denton Corker Marshall, the latter of whom is represented by their exquisite Stonehenge Visitor Centre, built in 2014.

Chapters 5 and 6 look at the practical side of architecture, and what it is that architects do in their day-to-day activities working at an architecture office. In Chapter 5, the developmental side of a project is explored and what those design challenges are, such as whether a building’s use is to be residential, commercial or institutional. In the following chapter, The Design Process in Action, Makstutis illustrates how architects communicate their ideas to the client, city planners, and the contractor, such that the building can be constructed.

The book finishes with a single case study, showing the beginning to end design process for a building from its inception to its occupancy. Perhaps one of the most illustrative chapters of the entire book, an architectural student will get to experience the complex coordination of running a construction site prior to having the opportunity of visiting one in person. This is followed by the book’s closing chapter, in which the book’s author summarizes the lessons of the previous chapters.

Overall, the book is a no-nonsense primer for the curious designer who may wish to know about the architecture profession, as well as being a handy reference for first-year architecture students. Just as much for the teacher as the student, current educators in architecture programs can also learn much from Design Process in Architecture as it provides an up-to-date catalogue of current trends in both architectural practice and education.

And as has been the case with previous LK Publications reviewed in the past by Spacing, including Hatch: The New Architectural Generation (2008), Extreme Architecture (2009), and 100 Years of Architectural Drawing (2012), this book maintains along with these others a high watermark for architecture and design culture.

For more information on Design Process in Architecture – From Concept to Completion, visit the Laurence King website.