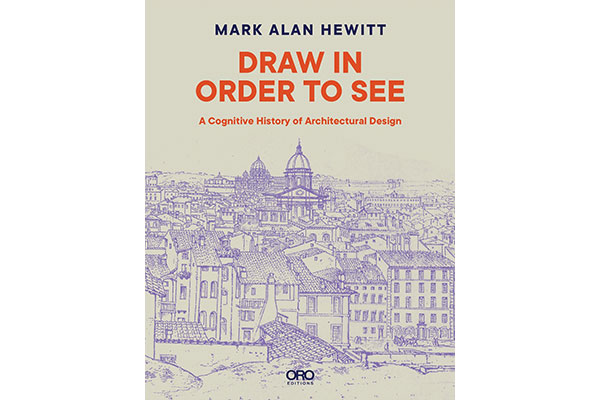 Visualizing one’s ideas is a well known standard in the design fields. Thinking visually is particularly important in the fields of architecture, interior, landscape, and urban design, where a diversity of representations—from quick ideation sketches and models to technical drawings and photorealistic renderings—are commonly used over the course of conception and construction. Although the past few decades have seen an explosion of research and writing looking at representations and the workings of the brain, few have connected the latter to architectural design and processes.* Rarer still are books that link visual thinking and cognition across architectural history. To my knowledge, Mark Hewitt’s recently published Draw In Order to See: A Cognitive History of Architectural Design is the first to enter this uncharted territory….and a great one at that.

The book covers a chronological arc spanning 12,000 years, analysing the connection between visual perception, cognition, and architectural design. This necessarily touches on the effects different methods of representation (drawings, models, computer-aided design, etc.) have on learning the practice of architecture and how they impact the perception the world of those using them. The timeline can be seen broadly through the names of each of twelve chapters—1_New Thinking about Design, 2_Brains, Bodies and Images, 3_Mimesis, Memory and Enactment, 4_Crafting, Depicting and Assembling, 5_The Discovery of Depiction, 6_Scenography and Craft in the Baroque, 7_Teaching Design in the Modern Era, 8_Engineering, Science and the Modern Machine, 9_Materials, Models, and Montage, 10_Conceptual Architecture and the Digital Void, 11_Design with Embodiment and 12_Twelve Steps.

The first three chapters lay the foundation for the book. The first, New Thinking about Design, offers a strong introduction, broadly outlining the scientific evidence that learning to think visually and develop visual acuity in architecture requires a hands-on, ‘embodied’ approach (via methods such as drawing). The latter is placed against  more recent practices that serve to distance the body from this design processes and representations. Within this context, Hewitt quickly highlights the mid-1400s as the fulcrum where a crucial cognitive division took place, as “artisan crafted buildings” gave way to architectural designs largely conceived of and developed fully through drawings and other forms of representation. This topics is further elaborated on throughout the book.

Importantly, this chapter also introduces research around the “action-perception” cognition cycle—the feedback loop between actions such as drawing and painting, and how humans see and judge what they are working on. As it relates to architecture and designing the built environment, Hewitt describes how this is a important part of the design process, as designer are in a continuous cycle of representing, seeing, using memory (precedents and learned case studies), judgement, re-drawing, and new perceptions. This process, he states, is critical to problem solving and advancing design work.

Brains, Bodies and Images, complements the latter, focusing on the physiology of perception and the processes by which humans perceive the world around them. Highlighting the connection between body and brain, this is most technical section of the book, but does an excellent job of providing just the right amount of accessible information for readers to digest his overarching argument, without dealing too deeply into the rabbit hole of anatomy and neurology.

The chapter reinforces the idea that humans have modelled the built world based on their senses and bodies. As such, Hewitt discusses two important kinds of ‘images’ used over the design process—one base on memory that is powerfully connected to emotions and bodily experiences, and the other vague, amorphous, partially-formed ‘exograms’ that require visual placeholders to be developed and honed over time.

The third chapter—Mimesis, Memory and Enactment—expands on the ideas put forth in the previous chapter particularly around the important role played by mimicry and imitation in the formation of good mental habits as well as the development of skills (such as drawing) and innovation. Hewitt ties this back to how memories are formed and how, in turn, these are used in a creative capacity by designers in attempting to resolve complex spatial and formal problems. Within this context, ‘embodied’ forms of visual thinking (such as drawing) are critical, not only the means of imprinting mental ‘images’ of places into one’s memory, but also in creating visual place-holders during the design process that can then be evaluated, and developed.

This connection between body, memory, perception, creativity and the built environment is the backbone of the book, the bulk of which charts this relationship over time and its effect on architects and architecture. With this in mind, Hewitt divides history into three broad cognitive eras: “crafting” that relied fully on embodied and mimetic ways of engagement and spanned history prior to the 1400s, “depicting” that saw the emergence of drawings and similar forms of representation alongside artisanal, craft-based modes, and finally “assembling” post-1900 where designers fully disengaged from craft-based methods in response to the emergence of industrial processes.

These divisions are described in more depth within Crafting, Depicting and Assembling, after which the next six chapters focus on their evolution over time in more detail, covering a range of interesting topics from the evolution of specific architectural drawings and education in the Renaissance to the development of representations (and in turn architectural spaces) within the theatres of the Baroque, as well as the more recent birth of digital design and tools. Although Hewitt’s coverage clearly focuses on ‘Western’ culture, his analysis serves as an excellent basis for further study across a more diverse range of cultures.

The final two chapters—Design with Embodiment and Twelve Steps—put forth Hewitt’s thoughtful ideas on an alternative method of understanding, practicing and teaching architectural design based on his knowledge of neuroscience, perception and the creative process. This culminates in the final chapter with his twelve simple suggestions aimed at educators and practitioners of architecture to re-engage with these historically- and now scientifically-grounded ways of working and seeing.

Filled with rich illustrations and imagery, Draw In Order to See: A Cognitive History of Architectural Design is a valuable addition to the (sadly limited) ground-breaking works of the recent past connecting the latest research on neuroscience, representation, and its historical impacts on architectural education, practice, and design. It forces a strong reconsideration of ‘embodied’ practices of the past often: practices often slandered by contemporary “high culture” theorists.

It also clearly expresses the critical importance of understanding the cognitive impacts of different forms of representation. Too frequently, new design technologies and methods are fully embraced by schools and practitioners alike, without appreciating their broader impacts.

Simple put, Draw In Order to See is a must-read for all architects and designers. One can only hope that his plea for more research into the subject does not fall on deaf ears, but instead inserts new life into a discipline whose many oversights are becoming ever more apparent.

*Harry Malgrave’s The Architect’s Brain, Bryan Lawson How Designer’s Think and Sarah Goldhagen’s Welcome to Your World are among a small number of books that speak to the subject. Other works that engage the subject indirectly with less emphasis on the neuroscience and psychology includes Michael Merrill’s Louis Kahn Drawing to Find Out and Louis Kahn: On the Thoughtful Making of Spaces, and various books by Juhani Pallasmaa, such as Eyes of The Skin and The Thinking Hand.

For more information on Draw In Order to See: A Cognitive History of Architectural Design, visit the ORO Editions website.