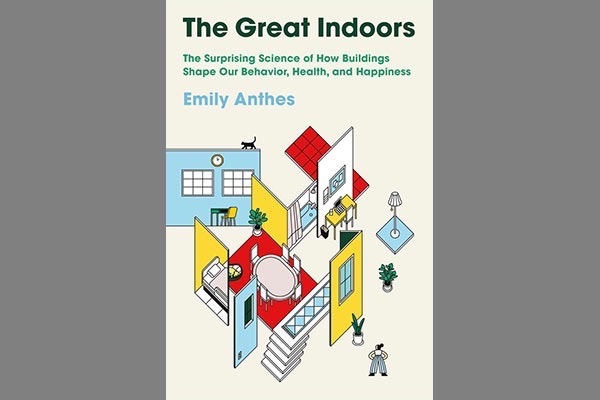 We spend most of our lives in buildings. According to well-known The National Human Activity Pattern Survey (NHAPS): A Resource for Assessing Exposure to Environmental Pollutants, North Americans spend roughly 85% of their time indoors. As such, we often take the spaces that structure our everyday lives for granted. We experience them constantly….but do we really know them? Enter science journalist Emily Anthes, whose recently published The Great Indoors: The Surprising Science of How Buildings Shape Our Behavior, Health, and Happiness offers a brilliant glimpse into the complexity of the interiors that pervade our lives.

The book is clearly divided into nine chapters—over and above the Introduction—each of which delves into some interesting aspects of different indoor environments. This is generally reflected in the clever chapter titles—The Indoor Jungle, A Hospital Room of One’s Own, Stair Masters, The Cure for the Common Cubicle, Full Spectrum, Jailbreakers, If These Walls Could Talk, Listen, and Record, Hope Floats, and Blueprints for the Red Planet—although one must venture within each to really appreciate the breadth of each.

Naturally, the first stop on a journey into understanding the indoor environment is our own homes. The Indoor Jungle shines a light on this, our most intimately experienced domestic spaces, but with an unexpected twist—looking, not at the spaces we know and love in the typical sense, but instead focusing on the ‘indoor ecology’ of bacteria and fungi common to our homes. This voyage into the interesting world of microbial forensics, sets the tone for the rest of the book insofar that it primes the reader to expect the unexpected as Anthes puts her own unique spin on analysing what one would assume are commonplace spaces.

From home to hospital. A Hospital Room of One’s Own offers an interesting counter point to the book’s domestic start by looking at the ins-and-outs of patient care within these critically important institutions. Opening with a succinct history of the modern hospital, Anthes looks at a number of meaningful issues, from Roger Ulrich’s ‘patient-centred care’ research and biophilia to operating room research and design.

Stair Masters continues the discussion around health, but within the context of chronic disease. As the chapter title suggests, the focal point is on issues such as heart disease and its relationship to physical activity, and the role played by the built world in addressing the latter. Given the nature of the topic, her discussion understandably increases in scale to speak to the subject at the levels of the city and neighbourhood planning. This includes speaking to auto- vs pedestrian-oriented areas and active design.  It also includes a wonderfully comprehensive analysis of the Dillwyn Primary School in Buckingham County Virginia—a school that was transformed to prioritize the health of its students and teachers.

As places of learning and places of work are intimately related, the chapter to follow takes a deep look at office and workplace. This necessarily highlights the impact of office environments on issues such as stress, performance, comfort and memory. Of particular interest is a critical look at the ‘open office’ trend alongside its post-occupancy research. It also give readers a glimpse into the researching this area and the technologies being used to gather data. The work of Well Living Lab and WeWork are a couple of organizations—among others—discussed targeting the issue of architecture as a data producer, speaking to its pros and cons. This is a topic very relevant during these times of Big Data and one that has a chapter of its own towards the end of the book.

Full Spectrum is arguably one of the most unexpected and fascinating chapters in the book, looking at a critical topic that is unfortunately discussed too infrequently—that of indoor environments, mental illness and developmental disabilities. Those with some knowledge of mental health will connect the chapter title with the focus of the chapter, autism.

This chapter alone is worth picking up The Great Indoors, as Anthes touches on an issue rarely discussed within architecture and interior design education, let alone popular public forums. Where people are generally in the know about homes, physical health and workplace due to their pervasiveness, mental illness is only recently finding a somewhat stable foothold in everyday discussions, as more and more people are becoming aware of their effects.

Anthes’ choice of autism as the foundation for the chapter is an interesting and understandable one, as it is one of the most commonly misunderstood amidst the general public ever since it hit the big screen in the 1988 hit Rain Man, with Dustin Hoffman playing an autistic savant. Within this context, Anthes does well to describe the nuanced issues around people living across the autistic spectrum who are trying to live lives as individuals, separate from their families, and how this relates to the design of the built environment.

Although autism is the focus, other design concerns are discussed including spaces for the deaf. The overarching message of chapter is aptly captured in its final paragraph:

Everyone deserves a safe, supportive place to live. And if we truly want to build a more equitable, inclusive society, that means extending the principle of good design not just to people of all abilities, but also to people in all circumstances and settings. No matter what mistakes they’ve made.

This serves as an excellent springboard to the next chapter Jailbreakers, that turns to the topic of correctional facilities—their history, idealogical underpinnings and their relationship to those enjoying freedom outside of their walls. More specifically, Anthes uses the topic to discuss environments of isolation and confinement. From sensory deprivation to social isolation, the chapter is grounded in the idea of what it means to ‘design for human dignity’.

Although it’s easy to look as those in jail and prison as “others’ deserving of whatever mistreatment might come their way, the issues around their design really have an eery familiarity to many of us enjoying the liberties of the outside world. One of the most direct being that of social isolation and loneliness suffered by many locally and abroad. Thus, the chapter does well to highlight the physiological and psychological impacts of environments designed specifically for this purpose and the larger implications of similar but broader societal problems.

Although the subject of technologies and the built environment weave their way into many chapters (particularly as it relates to research used to study the built environment), the seventh—If These Walls Could Talk, Listen, and Record—is dedicated solely to the topic, specifically within the context of the home building technologies, health monitoring systems and senior care communities. In classic Anthes fashion, she doesn’t shy away from being well-rounded about the issues, clearly outlining the benefits and dangers of deploying these sophisticated technologies at all scales. This will be an ongoing discussion for years to come.

With the most ambiguous title in the book, Hope Floats, is an interesting foray into resilient, light footprint structures within the context of disaster relief and climate change. The title relates to one of the main focuses of the chapter which is ‘amphibious architecture’, the visionary brainchild of Elizabeth English, founder of the Buoyant Foundation Project, whose journey is well covered within.  However, it also touches upon other interesting initiatives from Seattle’s Bullitt Centre to the SuperAdobe buildings of the CalEarth Institute.

The book ends as unexpectedly as it began with Blueprints for the Red Planet, that looks at extraterrestrial architecture, with a focus on settling Mars. At first blush, this seems like an odd choice, yet it brings the book to a wonderful conclusion given that the extreme nature of those environments—environments where humans cannot venture ‘outside’ at all—really highlights the importance of putting into practice the lessons learned about designing indoor spaces.

As such, the chapter does well to summarize the contents of the book, while speaking well to the additional complexities of inhabiting different planets—such as the effects of different gravitational forces on the human body. Towards this end, different organizations that are thinking deeply about the issues are discussed—such as the Mars City Design—with Anthes seamlessly tying it back to the previous chapter as CalEarth Institute founder, the late Nader Khalili, also advised NASA on settling other planets.

Ultimately, The Great Indoors: The Surprising Science of How Buildings Shape Our Behavior, Health, and Happiness is a much-needed, easily accessible primer on the critical role interior environments play and how much we take for granted as we go about our daily lives. The book will leave readers with a both a better understanding of what we currently know about the indoors and also how much is still left uncharted.

In keeping with the chapters that bookend The Great Indoors, Anthes shows us that our most intimate interiors are as mysterious as space settlements. I don’t hesitate to say this is a must-read for architects and interior designers…and those who want a greater appreciated of the spaces we use daily.

For more information on The Great Indoors: The Surprising Science of How Buildings Shape Our Behavior, Health, and Happiness , visit the Macmillan Publishers website.