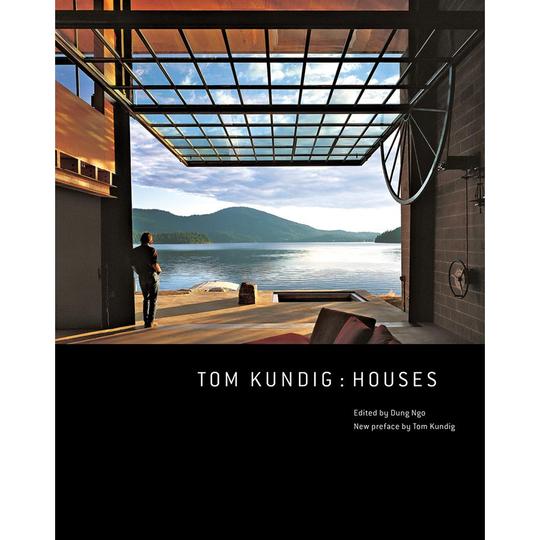 Tom Kundig: Houses is the kind of monograph that makes most architects’ hearts skip a beat. As a member of the successful architectural firm Olson Sundberg Kundig Allen Architects (recipient of the 2009 AIA Architecture Firm Award), Tom Kundig has kept a very personal body of small projects on the side, presented here in sumptuous detail. There are traces of John Ruskin and Charles Rennie Mackintosh in his honesty of materials and craft, as well as Buckminster Fuller in his manipulation of mechanical fixtures, infused perhaps with a hint of H.R. Giger.

As presented with a preface by the architect himself  – he says “this book is an eye blink” – five pet projects are included here: two studios, two cabins, and the architect’s own house, documented in eye-popping detail, transforming the monograph at times into tectonic poetry, or a collection of great guitar riffs. Whether shown as a computer rendering, hand-drawn detail, or colour photograph, the book captures the sheer joy of architecture as an art and a craft, in all its playfulness and inventiveness.

The aesthetic of winches, pullies, and raw steel handrails is a perfect match for the unfinished concrete, plywood, cor-ten steel, and concrete block that Kundig employs. Here is the vocabulary for a new Arts & Crafts movement, as modern technology is rendered an anachronism in its presentation of these five modest structures. Interspersed by short essays written by mentors and colleagues, including Steven Holl and the book’s editor, Dung Ngo, the book is a careful study of the modern architect as both artist and builder.

In a short preface, Kundig acknowledges his many supporters, from friends and family to colleagues and mentors, for as he says, “the architect working alone is a myth.” Following is Studio House (1998), a photographer’s live-work home near Puget Sound, the first of five architectural poems offered in the book. As the editor Dung Ngo points out, this project would prove to be the watershed for Kundig. With an inspiringly rich palette – the site’s natural light and Douglas Firs, as well as a mortar and brick wall the architect chose to keep from an existing house on the site – all combine into a tectonic harmony of materials, volumes, and whimsy.

A large double-height door, which simultaneously opens a window above the door’s overhang – an example of Kundig’s signature ‘hot-rodding’ –  leads into a pinched corner between the old brick wall and the new shuttered concrete walls, exposed in all their raw honesty. Details throughout the house are rusted then polished steel and aluminum, with the showpiece being a steel armature hanging over the main living space, itself affixed with lighting for the photographer’s main studio space, a large fan for ventilation, or candelabra to light the space for entertaining. Working closely with an interior designer and metal worker, who both clearly shared a sense of his vision, Kundig designed among other playful details a sculptural blackened steel fireplace for the living room, and a kitchen island with a polished concrete countertop, poured concrete doors on cast bronze wheels, opening and close in steel tracks set in the unfinished concrete floor.

Following Studio House is an essay by the book’s editor, Dung Ngo. In his introductory paragraph, he muses upon the opening mechanism that Kundig designed for Olson Sundberg Kundig Allen Architects’ Seattle office, by using the city’s 40 psi water pressure to open and close a three-ton glass and steel skylight over the offices’ main circulation spine. Here was quite clearly a remarkable and unique spin on the otherwise business-as-usual enterprise of architecture, and so did Kundig allow the editor to document these otherwise intensely personal projects. “As is often the case when encountering Tom’s work, the first jolt of bravura is immediately followed by a host of mature concerns for his sophisticated use of materials and construction, clarity of proportion and spaces, a reverence for light and the natural landscape, along with the unexpected and a sly sense of humour that shows itself in ways large and small.”

Kundig, as Ngo points out, is the son of an architect trained at the esteemed ETH in Zurich. Tom then, at a young age, would have been strongly influenced by his father’s strict modern aesthetic, and one can see its maturation in the younger Kundig’s work. One of his father’s artistic associates, a sculptor named Harold Balazs, was perhaps the biggest artistic influence on Tom from the time he was a boy. As the architect himself says, through Balazs, he was able to “witness the artist’s heart. I learned about the willingness to work relentlessly, take risks, avoid bureaucracies, laugh at the absurdity of life, and, most importantly, I learned it’s not about the art, it’s about the world.” That the sculptor he so admired worked in the medium of steel is not surprising given its prevalence in much of Kundig’s material palette, and having worked for him as a youth, the young Kundig would’ve witnessed first-hand the means to change the world through pure will (along with a little help from a blow torch).

Ngo’s essay on the architect is a cipher of the man and his craft, indeed his whole professional ideology. While pointing out that the architect’s love of mountain climbing has informed much of his work in the consideration of materiality and touch, his contributions to the world of design are threefold: the reinvention of commodity, gizmos, and hot-rodding. As expressed by the remaining projects in the book, the editor concludes his essay by observing how these small and intimate projects have informed the larger, more complex projects he’s realized at Olson Sundberg Kundig Allen Architects, from his being an associate architect with Steven Holl on St. Ignatius Chapel, to the gorgeous Mission Hill Winery in West Kelowna.

In Brain House (2001)¸ a simple concrete box with double-height steel windows, the client wished for a studio detached from his house for his library and office. The outcome is a retooling of the banal, as Kundig employs half-inch steel plating, most commonly used to cover holes in road construction (reinventing commodity), as a sculptured material within the concrete box, providing a second-floor loft to the space. A fire pole and a dog window are further elements of whimsy in the studio, with the first ‘gizmos’ in Kundig’s architectural expression appearing here as a winch and pulley system in the ceiling, used for hanging a single light bulb which can be raised and lowered at will.

Steven Holl’s essay on Tom is the perfect set-up for Chicken Point Cabin (2004), perhaps the most alluring offering in the book (as well as providing the book’s cover image). Built on a lake in Northern Idaho, it provided a plethora of opportunities for Kundig’s experimentations with ‘gizmos’, what he refers to as otherwise banal mechanisms that provide a sublime connection to the world. At Chicken Point Cabin this is most readily seen in the creation of a counterweighted wheel and gear device, complete with a governor, to open a six-ton, thirty-foot high window on the south side of the structure. As Ngo points out in his essay, it is in this manipulation of the mechanism that allows for a sublime transformation: the whole larger landscape of the site becomes integral to the house itself through the action of opening this massive window.

The device that allows it to happen, the gizmo, can only be realized as an architectural solution. Its expression here, though, is uniquely Kundig’s. The rest of the house, with its palette of exquisitely finished plywood and concrete blocks, miraculously transcends its gritty industrial aesthetic by the simple act of opening a window, albeit a monumental one. This is echoed in the nineteen-foot solid steel doors which are the main entry to the house. Another reinvented commodity in the house is the central fireplace, a four-foot diameter section of the Alaskan pipeline, which acts as the central hearth for the house, as well as its primary structural support.

Following the book’s third essay by Billie Tsien, we are presented with the last two projects in the book – Delta Shelter (2002) and Hot Rod House (2006). Where the shelter is more architectural folly than a habitation, the architect’s own house is the absolute reality of the architect’s notion ‘to dwell’. The former project, located in a part of Washington known for flooding, is essentially a glass box on steel stilts. Two-storey high walls of beautiful cor-ten steel slide in tracks to open up the box in the summertime. The gizmo of the mechanics that slides the four panels on the structure is, as one would expect, an aesthetic in the house’s Mies-like sparseness.

The final project in the book is introduced by Rick Joy, who Kundig notes is a “poet-of-place who is working at a higher plane than the rest of us mortals,” and is a discussion of architecture’s ascent into the ephemeral, as made evident through the five projects presented in the book. But it is Hot Rod House which shows the architect at his most inventive and playful, and perfectly illustrates the concept of ‘hot rodding’ which Ngo speaks of. Likewise, does it provide a metaphor for it, as the architect has built a new house atop the old house’s chassis. This, Ngo explains, is the most important aspect of Kundig’s work, as each project is uniquely personal, and even more when it comes to the architect’s own house.

Tom Kundig: Houses is a must-have for its beautiful presentation, and a thoughtful look into a creative mind currently practicing in the Pacific Northwest. In the words of Billy Tsien, “He reminds us that small moments in life are precious. That is his gift to us.”

Note: This review was originally published in 2009, and has been featured in From the Stacks as the publishers celebrate a fifteen year anniversary edition of this monograph.

Sean Ruthen is a Metro Vancouver based architect and current RAIC regional director for BC and Yukon.