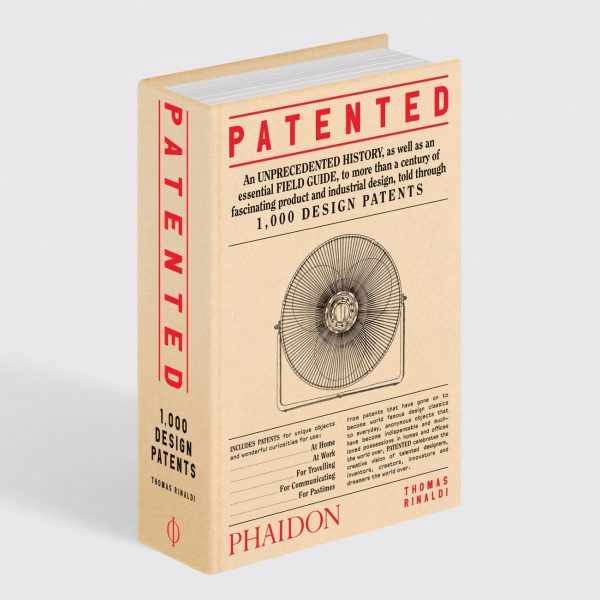 From patents that have gone on to become world famous design classics to everyday, anonymous objects that have become indispensable and much loved possessions in homes and offices the world over, this book celebrates the creative vision of talented designers, inventors, creators, innovators, and dreamers the world over.

In this new 2-¾ inch thick tome on the history of invention, one is able to behold 120 years of human innovation set side by side in clear line drawings, displaying some of the greatest examples of twentieth century design. As one would expect to see here are Ray and Charles Eames, Elon Musk, and Steve Jobs, along with Walter Gropius and Frank Lloyd Wright – but perhaps most importantly, the reader is introduced to the names of many industrial designers, such as Henry Dreyfuss and Dieter Rams.

With the discerning eye of an architectural historian, Rinaldi has applied his own unique algorithm to distill some 750,000 patents issued since 1900 into what he feels represent the best 1,000 specimens, presented here in chronological order. In so doing, he has given us not just an indispensable resource at our fingertips, but has shared the lessons he learned along the way about the difference between a patent, copyright, and trademark.

For as we learn in the book’s opening pages, there are two types of patent – utility and design. As Rinaldi tells it, utility patents – which protect how something works – have been around since 1790, while design patents – which protect how something looks – came later in the mid-nineteenth century. He also notes that the utility patents outnumber the design ones nearly ten to one, though as he points out at the end of the book’s introduction, their numbers have grown in the last two decades, such that the number of design patents issued in the last two decades has surpassed those issued in all the years before.

As a tool then for a cultural historian, whether art or architecture, this book’s cup runneth over, for here side by side are design patents for buildings, airplanes, and cars next to those for toasters, televisions, and telephones. The first two patents from 1900 he includes in the book are for a billiard table followed by a clothes iron, while the last three in the book are perhaps the most telling of our time –  a drone, a robot with AI, and a respiratory mask, the last one just issued in April of 2021.

Two things pop out of the book, the first being the unique illustration style that accompanies each patent – whether a locomotive train or the iPhone (patent number D558,758), they are each depicted in the same minimalist line drawing form. Having them collected here in this manner provides a unique way of looking at them – from the profound to the pedestrian, these are the inventions that have defined our lives in the modern world.

The second thing to pop out is Rinaldi’s curated collection of ten household patents at the beginning of the book, as seen in his case from one who appreciates industrial design, creating a small chronology of each item over a simple two-page spread. Having been influenced by similar collections he saw at the Henry Ford Museum when he was a youth, he has taken the patents of several objects of the same kind as a visual demonstration of how these objects have changed in appearance over time.

These object taxonomies include such benign household items as alarm clocks, toasters, irons, and washing machines. The objects he includes which are more culturally loaded are especially of interest, including the current smartphone and how it has evolved from an awkward shoe-sized telephone, along with a flat screen TV progressing from a small cathode ray tube.

The book is in a way autobiographical, for as editor of the material he has captured certain iconic cultural moments, such as the patent for the Coke bottle, several Eames chairs, and even a round habitable structure designed by Buckminster Fuller. As he notes in the book’s introduction, it was in the 1930’s when industrial design came into its own, seen in the number of design patents which would double that of all the previous years in the 1930’s, and further noting it would not be until 1990, with the emergence of new digital technology, that the number of design patents issued each year would jump again so dramatically.

Most fascinating is to learn about the influence of one of the more recent legal patent battles, Apple vs. Samsung, which took place in 2016 and since which time has seen an even greater increase in design patents issued, despite the fact that objects like cellphones and televisions are only seeing nuanced design changes from year to year. Rinaldi also notes that intellectual property as a legal entity had been around for about a century prior to the formation of the US Patents Office in 1790.

Each design patent is differentiated from utility patents by a D prefix, and at last count in the book there are currently over 885,000+ and counting. For these reasons and more, what Rinaldi has uncovered here is both fascinating and compelling, especially in how he points out that proof of US citizenship was never a prerequisite for registering a patent, such that designers and inventors from all over the world are represented here.

A wonderful collection of rich visual imagery meant to be appreciated in book-form, Patented should be on the bookshelf of every architect, graphic and industrial designer, as a treasure trove of design covering twelve decades. Skillfully edited by the book’s author to provide a snapshot of some of our world’s bests designs along with their inventors, it is a compendium that has taken pride in its illuminating that which has often been dismissed as banal, showing it instead as something that is a wonder to behold.

For more information on Patented, go to the Phaidon Press website.