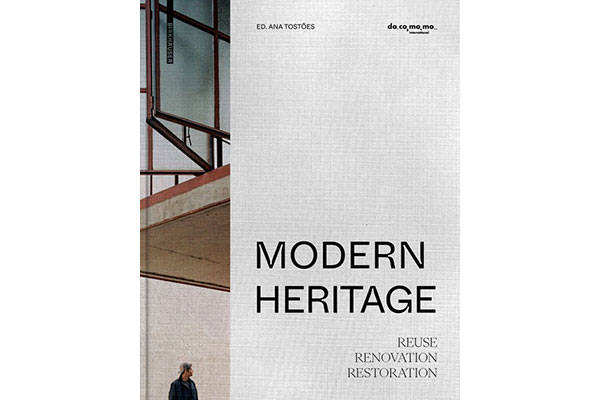 Modernism was the defining architectural expression of the 20th century – a movement that transformed built environments around the world in an unprecedented way. Today, the original function of many of these buildings is no longer required, or they are in urgent need of repair. This publication, produced in cooperation with Docomomo, explores strategies of rehabilitating work from this era.

At a time when modern buildings around the world are showing their age, not-for-profit organizations like Docomomo International continue the crusade to preserve many structures that have not made it onto the UNESCO World Heritage List and therefore are at risk of demolition. While some of the 24 projects in this wonderful new book, Modern Heritage – Reuse, Renovation, Restoration, may be less known than others, there are still here several that have been on many an architect’s must-see list, such as the Sydney Opera House and Neue Nationalgalerie in Berlin (also, the only two here that I have personally visited).

Skillfully edited by Ana Tostões, architect and Chair of Docomomo International from 2010 to 2021, she would’ve in that time seen immense change in architecture and preservation efforts, both in relation to the environment and social justice. In order then to even begin the monumental task that is the book, she has rightfully started it with ten essays on the subject—Why Preserving Memory Matters for Building a Wonderful World and Cultural Diversity in Conservation and Inherent Resilience are but two standouts—all placed at the start of the book ahead of the main stars of the show.

A number of the projects featured here include some that have entire publications dedicated to them already, such as the Neue Nationalgalerie Berlin, the first building featured in the book. Varying in size and program, each building is presented in pairs corresponding to their degree of rehabilitation, such as the massive restoration efforts of the Neue Nationalgalerie and Yoyogi National Gym in Tokyo by Kenzo Tange which start the book off.

As Tostões makes abundantly clear in her introduction, it is time for society to wake up and realize how important these buildings are as vessels of cultural identity. In Renato Anelli’s essay Lina Bo Bardi’s Casa de Vidro, we are represented with one of several instances where the architect-as-homeowner takes on the cause to preserve their Modernist home, built in the same modernist vein as so many other similar structures in Sao Paolo.

And just as in Brazil, there are other treasures from here and everywhere in between–Berlin, Tokyo, Amsterdam, Johannesburg, Mexico City, Madrid. As the book makes staggeringly clear in its 264 pages, all over the world there are stories of how Modernist structures continue to be vehicles for social justice, such as the Serpentine housing complex in Helsinki, which continues to be a state-owned housing project seventy years from the time of its construction. Here featured alongside the Cité du Lignon rehabilitation, which continues to house nearly 6,000 inhabitants, both important projects—built in the 1950’s-60’s—have carried on as the title of their pairing would suggest, as Engaged Societies.

Other heritage landmarks featured here include well-known buildings such as Louis Kahn’s Yale Center for British Art and the Municipal Orphanage in Amsterdam by Aldo Van Eyck, considered as the epitome of the idea of Team X and the cradle of Structuralism. But also here are many less known structures like Casa Gorman, a wonderful transliteration of Corb’s Five Points built in Mexico City by Juan O’Gorman in 1930. And no collection of the Modern Movement would be complete without Le Corbusier – with 17 of his buildings now UNESCO World Heritage sites, there remain some lesser-known works of his that are in danger of falling between the cracks. Such is the case with his studio apartment in Paris, where he lived from 1931-34, presented here with photos, plans, and sections.

The book also provides the editor with an opportunity to showcase Docomomo itself, founded in the Netherlands in 1988. With the mission to document and conserve modern sites, buildings, and neighbourhoods, Ana points out that at the time of its founding, several modern masterpieces had already fallen victim to the wrecking ball. As she notes, “the Modern Movement was often mistakenly related to a style, perceived in a skin-deep point of view and superficially adopted as simple form, as a modern shape.”

She further notes that if one goes back to the tenets of the Bauhaus, the Modern Movement remains as it did then an opportunity to address economic and energy efficiency, social equality, and inclusion. Docomomo sees itself as the organization best able to make this visible to the general public, certainly as the many architects and preservationists here have demonstrated in this astonishing volume. Not just the buildings but the hard work of those architects and preservationists who have allowed them to continue for another generation needs to be celebrated and applauded.

With 77 Docomomo Chapters spread across the globe, including one in Ottawa and Quebec City (Vancouver’s sadly was shuttered in 2009), this book is a baton to be passed to the new chair, Uta Pottgiesser, who will oversee the next decade of the organization from Delft, moving the organization’s Lisbon headquarters from where the former chair had presided. With very large shoes to fill, the new chair is likely to continue to expand the heritage project beyond it’s often Eurocentric borders, as Docomomo updated its mission statement in 2014 to provide for a more international scope.

As Ana points out, this shift to Docomomo International has resulted in the creation of 30 new working parties since 2010, with particular emphasis on Latin America, Asian, and African countries, such that they now represent more than a third of the current membership. It will then fall to Uta, who provides the book’s essay Documentation and Conservation of Modern Movement Architecture in Education, to expand the organization’s influence even more.

Finally, the book is also a catalogue of projects that were recipients of the Docomomo Rehabilitation Award in 2021, created to recognize outstanding achievements in the preservation and restoration of Modernist structures around the globe between 2010 and 2021. Several of the essays in the book have been written by the jurors—representing the USA, Chile, Australia, Germany, and Japan—all of whom presided over the 24 award recipients. Their essays also speak to the difficult task they had to narrow the field to those that received the award.

With many Modernist buildings in Canada also needing to be rehabilitated, the book is a clarion call to recognize these treasures in our built environment. As both Quebec and Vancouver are currently rehabilitating their Modernist legacy—the Brutalist Grand Theatre in Quebec City was recently given a new glazed envelope, while seismic upgrades are ongoing to the Great Hall of Arthur Erickson’s UBC Museum of Anthropology – there is no doubt that several structures in this country have the support of many local advocates, like the Bardi’s in Sao Paolo. But without the benefit of more local chapters of Docomomo in Canada, many other Modernist structures will remain at risk.

With these 24 award-winning projects presented here in stunning colour photography, complete with plans and sections of each, the efforts made by each preservationist to lovingly restore these buildings is included in each building’s backstory. As such, Modern Heritage should be on the bookshelf of every architect, planner, teacher, and student. And with the jurors/essayists providing a passionate and urgent plea for the need to continue these efforts for not just these 24 but the many, many more Modernist structures around the world, the need to educate the public on why these structures continue to have value falls on us all.

For more information on Modern Heritage, visit the Birkhäuser website.