_____
It’s starting to become a habit: research for one project hereabouts leads to surprising connections to other things that you didn’t plan for. This is often a good thing, and it certainly was in this case.

First a bit of personal nostalgia: when I was growing up in Regina, there was this commercial on television that one could count on as a confirmation of summer’s arrival being either complete or at least immiment. The commercial advertised a play that I never got to see before leaving Regina for Ottawa: The Trial of Louis Riel. As advertised by the title, the play was a dramatic re-enactment of that same trial of that twice-rebellious, doomed and martyred Métis politician.

Fast-forward to 2011 Ottawa. In the course of researching matters of Lowertown history, I stumbled across a heritage building with links to the North-West Rebellion, the ill-fated last of Louis Riel‘s two campaigns against the federal government in the spring of 1885 on the plains of what is now Saskatchewan. 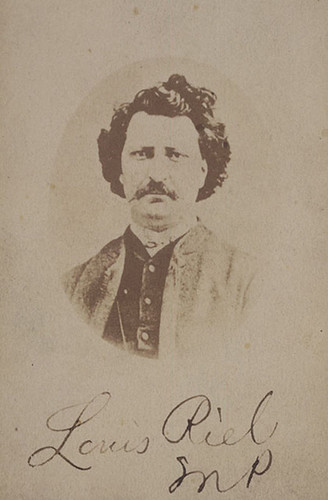 The building in question, Valade House, served as the home of Dr. François-Xavier Valade and his medical practice from 1866 to 1918. Valade, it seems, was among the few medical experts willing to find Riel clinically insane in the weeks between Riel’s capture and his execution by hanging. Such experts were outnumbered by those who deemed Riel sane enough to stand trial on charges of treason.

More to the point: Dr. Valade was one of the last three physicians called in to examine Riel between his conviction and execution to confirm his sanity or lack thereof…and was the sole dissenter against the majority opinion.

The apparent coincidence – perhaps not a coincidence – lies in the fact that both Riel and Valade left a legacy in the street names of Ottawa’s Orléans borough. Louis Riel Drive can be found in the southwestern reaches of the Queenswood Heights section, whilst Valade Crescent is part of one of the condominium developments in the central third of Fallingbrook.

Both streets were creations of the former Cumberland Township, as part of the “Cumberland Urban Area” as it was once officially known. Louis Riel Drive predates Valade Crescent, with the earliest notice of the existence of each in the street atlases of the day would be 1985 and 1989 respectively (going by the results of checking the Pathfinder Maps street atlases for Ottawa-Hull during those years).

That both rebel and doctor should find their names honoured on the streets of Orléans is perhaps not a surprise, given the region’s history as a francophone enclave since the founding of Orléans as a farming community over 150 years ago, and the odds against many at Ottawa City Hall during the 1880’s having much sympathy for the concerns aired by Mr. Riel while he lived. The only minor surprise might be that so much time passed in the interim.