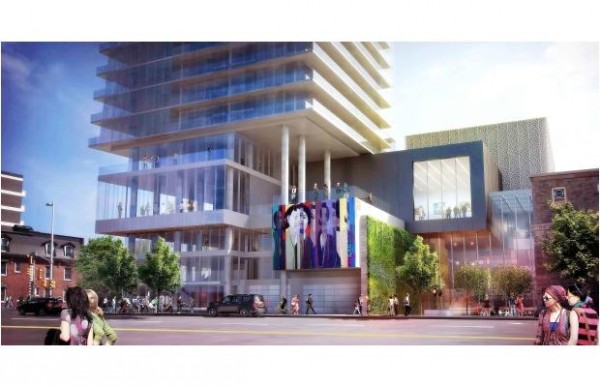 Yesterday, while Toronto City Hall was going wild trying to convince its mayor to take a leave of absence, following his admission to smoking crack cocaine, the much quieter Ottawa City Council voted to approve a $34-million redevelopment plan for the Arts Court, making progress in a project that has taken almost ten years to put through. But for a city that often takes years, if not decades, to go from Council to concrete, this project has shown that with some creative thinking, and a reallocation of funds after a $9-million federal grant fell though, Ottawa is still dedicated to both new development, and investing in the arts.

But while following these two stories simultaneously on twitter yesterday, I started to wonder why the Arts Court project sounded so familiar, until it dawned on me that I had already heard, and responded, to this story before – simply in a different city, at a different scale, and with a different general reaction to it. It is striking the similarities between the Arts Court redevelopment and the highly controversial Mirvish+Gehry project in Toronto. Both are on sites with existing heritage and cultural buildings, and both have a planned program of art galleries, educational spaces tied into local institutions, and condo towers to both develop the area and support the cost of the art spaces.

For Ottawa’s Arts Court, the project will see an expansion of the Ottawa Art Gallery, with the purpose of housing the currently under-displayed Firestone Collection – presently located in the original Arts Court heritage building – as well as a 17-storey condo tower, along with either hotel or office space. For Mirvish+Gehry, two proposed 6-storey podiums will feature a large gallery for the Mirvish Collection, classrooms for Toronto’s Ontario College of Art and Design (OCAD), and act as the base for three 85-storey condo towers. Yet while the programs of these two projects are almost identical, as well as their important geographical locations within their respective cities, there is no mistaking their subtle, but significant differences. Mirvish+Gehry is not simply just Arts Court on steroids.

Firstly? Scale. While Ottawa is in no way comparable to Toronto’s size or population, especially if you include its outer suburbs, there is a major difference between 17-storeys and 85-storeys three times over. This is not to say there are not density questions for Ottawa as well, however, the project has already been scaled back, and the large majority of the concerns expressed have been due to either traffic or parking issues – which should really be resolved with better transit options and less need for said cars – or due to the sound of truck air-brakes, which is a separate issue from the Arts Court project all together. The other difference is that, while Toronto may be able to populate such a dense complex, Toronto’s Chief Planner, Jennifer Keesmaat, has expressed major concerns over the effects that such pin-point density would have on the infrastructure of city services in the area.

This is not currently of pressing concern in Ottawa, save for over parking spaces, with City Council unanimously voting in favour of the project. Density, within the right moderation, is healthy for a city and is much needed in Ottawa. It is also a good sign to see development and densification happening where it should, starting in the downtown core, along with a move towards mixed-use urbanism. Development is crucial for any growing municipality, as long as it is happening in the right places, at the right pace, and with a pursuit for good architecture, and urban and social integration.

However, the biggest polarity between these two projects is their differing responses to the heritage buildings on their existing sites. While Mirvish is currently headed to the OMB to fight for the complete demolition of four heritage buildings and the thriving Princess of Wales Theatre, Arts Court has incorporated the former courthouse building into its new design, ensuring its continued importance in Ottawa’s civic and architectural history. However, this varying degree of respect for a city’s heritage, and collective memory, appears to be the result of a difference in apparent motives, from the need to construct a personal legacy in built form, at any cost, in Toronto, to true city-building in Ottawa’s case.

And ultimately, what it all comes down to is positive place-making, within the greater urban fabric of the city. For if the proposed design drawings are anything to go off of, the Arts Court redevelopment will turn a currently desolate urban corner in Ottawa into a thriving place for pedestrians, event-goers, and all-things-creative. It is wonderful to see significant heritage being preserved, the arts being invested in, and modern development happening in the Nation’s Capital. The Arts Court project is expected to break ground next year, with an anticipated date of completion set for 2017. Happy 150th Birthday Canada! This court is now is session.